Anyone who’s ever accidentally dropped one of grandma’s teacups knows that fine china isn’t resilient. But one day, rather than shattering, these heirlooms and other ceramics might bounce back after taking a hard bump.

Researchers are making progress, albeit on a microscopic scale, toward producing shatterproof ceramics. By customizing the material’s internal structure rather than its composition, the scientists are imparting to it the ability to absorb and dissipate large amounts of what would normally be destructive energy.

At the American Physical Society (APS) annual meeting, held last month in San Antonio, a number of researchers gathered to present their latest findings on materials like these. Called metamaterials, they exhibit combinations of properties not found in nature. The scientists discussed a variety of substances—ceramics, silicones, and elastomers—with an unusual knack for dissipating energy.

Ceramics tend to be strong and stiff. But because they are brittle, they don’t fare well as structural materials. Graduate student Lucas R. Meza would like to change that. Working with California Institute of Technology’s Julia R. Greer, a professor of materials science and mechanics, Meza has shown that it’s possible to make tiny samples of ceramics that are strong, ultralight, energy absorbing, and capable of returning to their original shape after being squashed.

The secret to that unnatural combination of properties lies in the way the researchers make and arrange the material’s nanostructured building blocks. As Meza explained in San Antonio, the components themselves are brittle, hollow alumina nanotubes. But when the scientists assemble the tubes into microscopic trusses—patterned engineering structures used to support bridges and roofs—the final structure becomes squishy and thereby dissipates energy.

Credit: Mitch Jacoby/C&EN
An array of large and small holes in this rubbery slab (left) causes it to exhibit unusual mechanical behavior. For example, pressing down on the slab leads to alternating alignment of the holes: One set elongates horizontally and the other elongates vertically (right).

To make the structures, the team uses a three-dimensional lithography-based printing process to form a nanoscale polymer scaffold. They coat the scaffold with alumina or other ceramics via atomic layer deposition, a technique known for making films that conform perfectly to complex shapes. Then they etch the polymer with an oxygen plasma, leaving a freestanding 3-D network of hollow ceramic nanotubes.

How well the tiny engineered structures stand up to abuse depends critically on the wall thickness of the tubes. At the APS meeting, Meza looped a video showing that a structure built from 50-nm-thick tubes responds to compression like ordinary ceramics: It shatters irreversibly.

In contrast, an otherwise identical structure assembled from 10-nm-thick tubes tolerates squeezing uncharacteristically well. Even after being compressed to half its volume, the thin-walled structure springs back to its original shape (Science 2014, DOI: 10.1126/science.1255908).

Built To Bounce
[+]Enlarge
Credit: Science
The ceramic nanotubes from which these truss structures are built are brittle. Yet the tube dimensions and overall geometry endow the structures with an atypical ability to spring back after being squeezed. 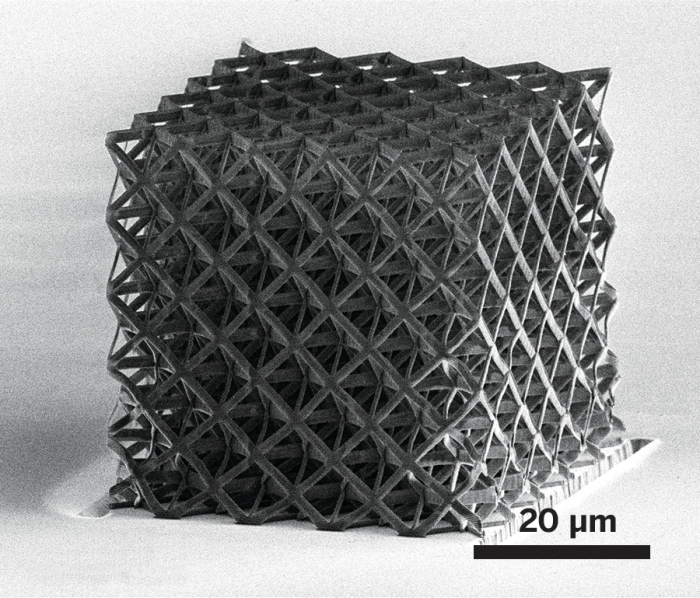 Credit: Science
The ceramic nanotubes from which these truss structures are built are brittle. Yet the tube dimensions and overall geometry endow the structures with an atypical ability to spring back after being squeezed.

“We took a brittle ceramic structure that failed catastrophically, and simply by changing the wall thickness, we’ve made it ductile and recoverable,” Meza said. The extreme difference in responses results from the thin-walled structure’s unique ability to dissipate energy by wrinkling and buckling. In principle, Meza added, that protection mechanism can be engineered into many materials by optimizing the dimensions of the building blocks. 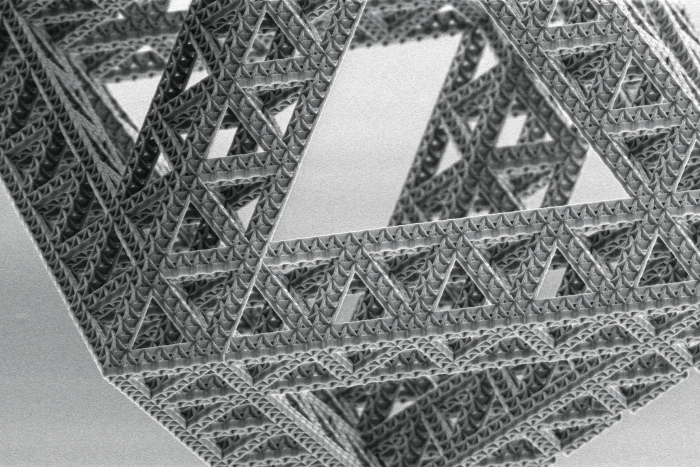 Shatterproof teacups would be a terrific invention. But as Meza acknowledged, the complexity of the Caltech team’s fabrication procedure lends itself to more advanced applications. The group is studying various uses, including high-capacity battery cathodes that resist cracking on repeated charging, bioscaffolds, and ultralight thermal insulation. Yet even those applications require major product scale-up, which remains challenging.

Another energy-dissipating material presented in San Antonio—one that could be scaled up more easily—may eventually be part of a damage-resistant automobile bumper. H. C. Bastiaan Florijn displayed bricks of a rubbery silicone material, about the size of an adult hand, into which a repeating pattern of large and small holes had been drilled. Florijn, a graduate student working with physicist Martin van Hecke of Leiden University, in the Netherlands, explained that the material’s structure led to a collection of unusual and tunable mechanical properties.

For example, pressing down on the slab with a fixed force causes the large holes to flatten horizontally and the interspersed small holes to flatten vertically—an atypical response. When the researchers press down even harder on the slab, the orientations of the flattened holes flip.

Furthermore, unlike an ordinary rubbery material, which would respond to being squeezed vertically by expanding horizontally, Florijn’s metamaterials contract in both directions simultaneously. That odd response results from an uncommon materials property known as a negative Poisson ratio (Phys. Rev. Lett. 2014, DOI: 10.1103/physrevlett.113.175503).

The upshot is that all of those responses alter the material’s stiffness in a predictable and controllable way. That feature could be used to design an automobile bumper that not only returns to its original shape after a collision but responds to driving conditions, Florijn suggested. While a car backs up slowly in a parking lot, for example, the stiffness could be dialed down automatically, making the bumper cushiony to avoid minor fender benders. At high speeds, the bumper could stiffen to provide protection.

Harvard University materials scientist Katia Bertoldi also studies metamaterials with unique abilities to dissipate energy. One class of structures she presented in San Antonio might one day be used in soundproofing applications or to enhance acoustics in concert halls. These materials, which function as tunable acoustic switches, consist of metallic cores embedded in an elastic matrix. By deforming these structures in predetermined ways, the researchers can manipulate the materials so they selectively transmit some frequencies while preventing others from passing through. Bertoldi uses related strategies to design metallic structures with ordered arrays of elliptical holes to protect fatigue-prone jet engine components from high stress levels and thereby extend their lifetimes.

Shock absorption and vibration dampening are just a small sample of the useful properties conferred by the unique structures of metamaterials. Now that researchers can engineer materials based on structural motifs ranging from the microscopic macroscopic, the variety of structures and unusual properties seems limited only by their imaginations.

Lucas Meza (April 14, 2015 3:47 AM)
It actually is very similar to the Eiffel tower because they're both made using the same principle of hierarchical design (here's an image of an Eiffel tower girder for comparison: http://www.primas-project.eu/servlet/supportBinaryFiles?referenceId=1&supportId=1600&width=170). The idea is that by introducing hierarchy, it is possible to create structures, or in this case meta-materials, with greatly enhanced strength- and stiffness-to-weight properties.

The image was actually taken in a scanning electron microscope (SEM), which is why it's black and white (although it would be much more interesting to say we were emulating M.C. Escher). There's no scale bar there, but the whole thing is ~100µm across, which is about the thickness of a piece of paper. It shows the new unprecedented level of control that we have in making materials with tunable architectures.
Reply »

Kathleen Lewis (April 11, 2015 1:59 PM)
Another thought- idea for possible development - application -
In the field of dentistry - dental crowns - restorations intended to be placed either over repaired natural teeth or dental alveolar implants - need to be able to absorb a tremendous amout of force / shear etc. Could this technology may have promise for improvement in that field as well as other biomedical applications such as joint replacement. Especially if it could be incorporated into a 3 d printing type of application.
Reply »

Lucas Meza (April 14, 2015 4:15 AM)
The particular meta-materials shown here aren't quite the optimal candidate for high strength implants, mainly because they are ultra-light weight and have a lower strength as a result of not having a lot of material. The principle of controllable 3D nano-architectures is very powerful for biological applications. The body has many features on nano- and micrometer length scales, and it is very difficult to capture them using traditional manufacturing techniques. With this type of fabrication process, it is very conceivable that some type of artificial biological device could be fabricated, dental implant, artificial joint, or otherwise.
Reply »