The Biggest Ever U.S. Plastics Show

Plastics Machines Steal The Show At NPE 2015
Credit: Alexander H. Tullo
Want to see plastics machinery up close? The NPE 2015 plastics trade show in Orlando was the largest ever. Headlining the show were some 400 exhibitors converting hot resin into cool plastic products.

The NPE 2015 plastics trade show, held in Orlando late last month, proved that even at more than a century old, the plastics industry is still capable of poaching business from materials such as metal, paper, and glass.

Innovation was on display at the exhibition. Resin suppliers and machinery makers broke new ground in packaging and automotive applications. The show also demonstrated that the plastics industry is taking three-dimensional printing—which had little presence at previous NPEs—seriously.

NPE is put on every three years by the Society of the Plastics Industry (SPI), a trade association, and this year’s show was the largest ever, attracting more than 65,000 visitors.

More than 2,000 exhibitors—resin makers, chemical suppliers, equipment manufacturers, and other plastics sector participants—filled more than 1 million sq ft of floor space at the Orange County Convention Center. SPI officials said the event will be the second-largest trade show held in the U.S. this year. Only the Consumer Electronics Show is bigger.

Milacron’s booth was one of the stars. The machinery maker staked out some of the best real estate at NPE, right inside the front doors of West Hall, the cacophonous and steamy convention floor where equipment suppliers demonstrated their machines using real resin.

Milacron was showing off its product, the Klear Can, injection-molding four of them every eight seconds. The plastic can is intended to replace metal containers, and as the name suggests, the Klear Can is clear, allowing brand owners to show off their vegetables, fruit, and soups.

Moreover, the Klear Can should appeal to food makers and consumers worried about bisphenol A leaching out of the epoxy linings of metal cans and into the food they store. The Klear Can, ironically, solves this problem through the use of even more polymer.

The can is made out of polypropylene, which, according to Russell Bennett, director of sales and marketing for co-injection systems at Milacron, is the only packaging resin that can withstand the 121 °C needed to sterilize food. Thus far, LyondellBasell Industries is Milacron’s chosen resin supplier.

Bennett, not exactly an impartial observer, contends the Klear Can might be the biggest thing in plastics since the soda bottle. He is working with “seven global brand owners” to roll it out commercially. “It will do for the polypropylene industry what polyethylene terephthalate bottles did for the PET industry,” he said. 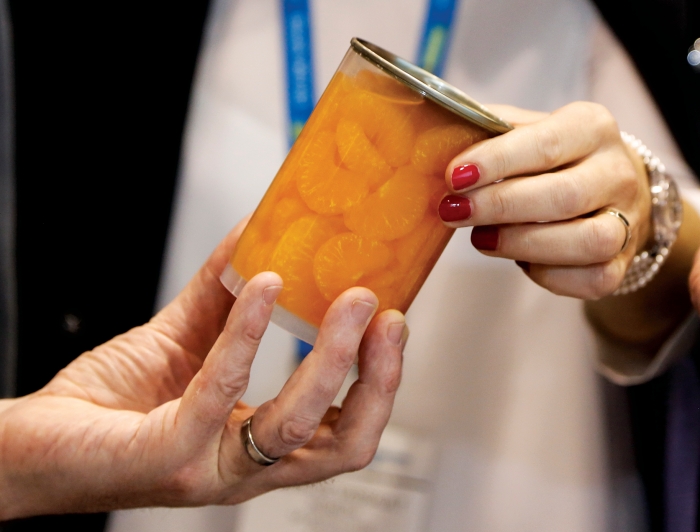 There is plenty of chemistry in the Klear Can beyond polypropylene. Kuraray is supplying an ethylene vinyl alcohol (EVOH) barrier layer that helps the plastic can exceed the industry standard of providing two years of shelf life.

Polypropylene, normally a hazy plastic, needs transparency if it is going to make the peas and tangerine wedges inside look appetizing. This is how the specialty chemical maker Milliken & Co. nabbed a place in the application.

Since its introduction in 2007, Milliken’s sorbitol-based clarifying agent, Millad NX 8000, has been helping polypropylene compete against PET and polystyrene as a raw material for drink cups and thermoformed food containers. The company is doubling capacity for the additive early next year to keep up with demand.

The Klear Can, in which Millad is loaded at 4,000 ppm, is another potential hit. “For food manufacturers, I think it is going to be a way for them to differentiate,” said Herrin Hood, a product line manager for Milliken’s plastics additives business.

DuPont is also part of the Klear Can with its Bynel ethylene copolymer adhesive resin, used to bind the various polymer layers together.

Bynel has benefited from the growing popularity of packaging with multiple polymer layers, according to Bill Cunningham, DuPont’s commercial leader for packaging in North America. The K-Cup, used in Keurig coffeemakers, relies on Bynel to bind its multiple layers together. Bacon packages at the supermarket have as many as nine layers.

And such plastic packaging is poised for continued growth. Paper is still the number one food packaging material worldwide, Cunningham said, with a 45% market share. Metal, he noted, is number two. Replacing them with plastic can cut down on food waste and transportation costs. “There is an awful lot of room for conversion,” he said.

The auto industry drove a lot of excitement at the show. Car companies are required to hit corporate average fuel economy standards of 54.5 mpg by 2025, but only 4% of cars made today meet it, pointed out Jeffrey A. Sternberg, global automotive technology director for DuPont.

Sternberg said his company has been improving its materials to meet increasingly stringent requirements from automakers. This can mean improving thermal stability so plastic parts withstand higher temperatures under the hood or increasing stiffness and strength for structural applications.

“Between the improvement in the materials portfolio and the incentives that automakers have to meet the standards, I think there’s a lot of opportunity,” Sternberg said.

Sometimes plastics allow carmakers to meet more than one objective. BASF had an example at its booth, where it showed off a nylon car seat back frame. The new seat back is an inch thinner than the metal version, giving customers the option of making the entire car an inch shorter as well. 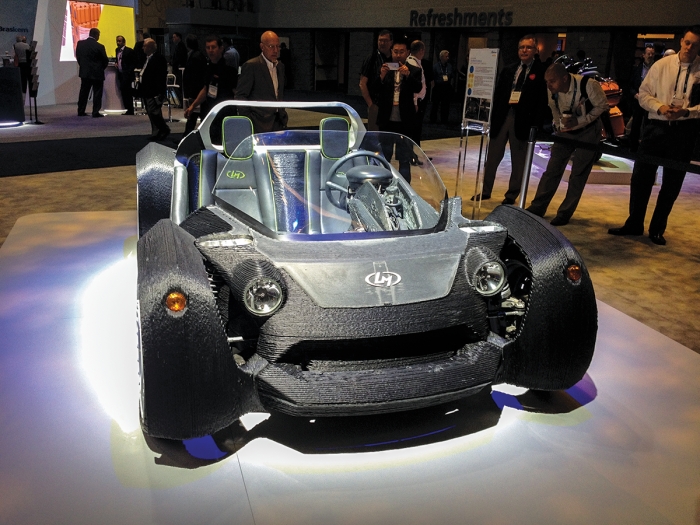 At the show, SABIC Innovative Plastics reported success in replacing glass with polycarbonate resin in automotive applications. The company has been developing its technology, based on a plasma-deposited coating that makes the plastic more scratch resistant, since the 1990s when the business was part of General Electric.

Carmakers are now applying the technology to production vehicles, according to Gregory A. Adams, vice president of industry marketing and strategy at SABIC. The company recently won applications such as the side windows of the Volkswagen XL1 hybrid vehicle, the roof of the Corvette Stingray, and the rear quarter windows of the Fiat 500L. “We believe this technology is ready for the next design cycles in the automotive industry,” Adams told reporters.

The plastics industry is also ready for 3-D printing, a fabrication process that has become popular among engineers and hobbyists but until recently was mostly an afterthought for traditional manufacturers of plastics and plastics processing machines.

At the show, the German injection molding machine maker Arburg showed its interest in the field with its Freeformer 3-D printer. Unlike most other printers, which make parts by extruding a plastic filament, the Freeformer does it by depositing melted plastic droplets.

In SABIC’s booth sat the Strati. Made by Local Motors, the Strati features a body 3-D printed out of carbon-fiber-reinforced acrylonitrile-butadiene-styrene resin using the Big Area Additive Manufacturing printer from Cincinnati Inc. At the show, SABIC announced that it will sharpen its focus on 3-D printing by working with universities, research laboratories, machine makers, and consumer products companies.

Collaborating is how resin companies need to win new applications, said Thierry Materne, vice president of technology and innovation at SABIC Innovative Plastics. Gone are the days when a resin maker could just sell polymer, leaving it to the customer to figure out what to do with it.

Today’s customers need a partnership with their raw material supplier. “Some of them wouldn’t care or wouldn’t know what the polymer is,” Materne said. “What they care about is the plastic’s performance, and it is our job to be able to translate.”

To watch plastics machines in action on the NPE 2015 trade show floor, go to http://cenm.ag/npe15.

Polymers
Innovation is still alive in plastics
Materials
3-D printing: A tool for production
Materials
HP aims to conquer 3-D printing
Share X
To send an e-mail to multiple recipients, separate e-mail addresses with a comma, semicolon, or both.
Title: The Biggest Ever U.S. Plastics Show
Author: Alexander H. Tullo
Chemical & Engineering News will not share your email address with any other person or company.