Now that its controversial chairman is gone, forced out last month by the White House, the Chemical Safety & Hazard Investigation Board (CSB) might, by some reckoning, be due for some quietude. But political turbulence continues to swirl around the small independent agency that investigates major accidents at industrial facilities such as refineries and chemical companies.

In a March 27 letter to the board, the House of Representatives Energy & Commerce Committee sought what could be hundreds of documents. Most material pertained to a January meeting at which CSB voted to give more authority to its chairman and canceled three long-stalled accident investigations.

The new probe builds on the work of another congressional committee: For more than a year, the House Oversight & Government Reform Committee has been examining the internal management of the board. That committee is joined by the Environmental Protection Agency’s Office of Inspector General, which has oversight authority for CSB. Together, their investigations eventually led President Barack Obama to order CSB Chairman Rafael Moure-Eraso to resign at the end of March (C&EN, April 6, page 8). Moure-Eraso, a former occupational health and safety professor and chemical engineer, had led the board since 2010 and planned to leave when his term ended in June.

Moure-Eraso’s exit at first seemed to close the book on a turbulent and convoluted tale of internal conflict and charges of inept, failed, and vindictive management at the agency. But now, the two House panels appear to be broadening their investigations into CSB’s management.

The probes, however, don’t touch on what CSB actually does, which is investigate complicated industrial accidents, produce reports, and publicize its findings with the goal of preventing similar incidents in the future. Over its 17-year history, the board has investigated and reported on the causes of 84 accidents and produced 31 educational safety videos. The reports and videos are widely praised and used by companies, unions, communities, and universities, and were prepared by an organization with a staff of 40 and a $10 million annual budget.

At congressional hearings and in a report compiled by the oversight panel, the current and past board members and CSB former staff complained of being marginalized and subjected to retaliation for expressing their views. They blamed Moure-Eraso for management failures, high levels of employee dissatisfaction, and the creation of what they described as a “toxic work environment.” Additionally, the inspector general found evidence of misuse of e-mail accounts by CSB leaders.

Criticism of Moure-Eraso and his two top aides reached a crescendo in a sharply worded March 18 letter to Obama from Oversight Committee Chairman Jason Chaffetz (R-Utah) and 13 members of the panel. The lawmakers urged the President to fire Moure-Eraso and the aides. The letter continued a Republican-led drumbeat for Moure-Eraso’s resignation, but this time, seven Democrats also signed it.

Motivation
[+]Enlarge
Credit: CSB
CSB called for strengthening refinery regulations after investigating this 2012 explosion and fire at a Chevron refinery in Richmond, Calif. 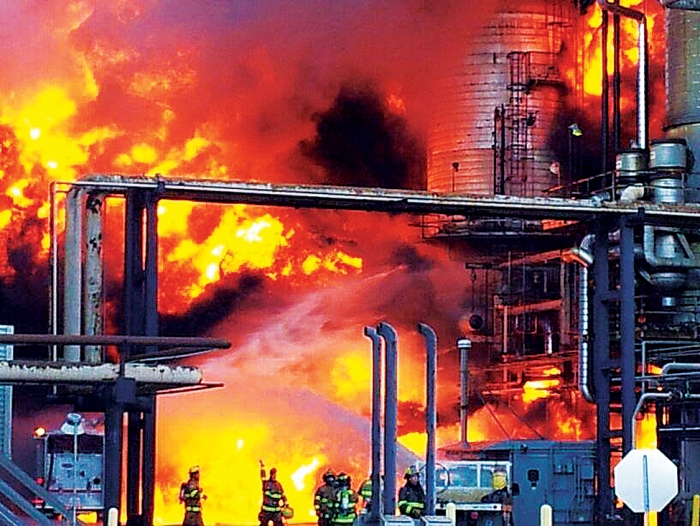 Credit: CSB
CSB called for strengthening refinery regulations after investigating this 2012 explosion and fire at a Chevron refinery in Richmond, Calif.

Among those Democrats was Rep. Mark DeSaulnier, who hails from Richmond, Calif., where a Chevron refinery explosion in 2012 sent 15,000 residents to area medical centers. His support for Moure-Eraso’s ouster surprised local community leaders, who strongly back Moure-Eraso and CSB. DeSaulnier defended his call for the resignation of Moure-Eraso and top CSB officials, saying they had undermined the board’s critical mission.

That didn’t sit well with Gayle McLaughlin, a Richmond City Council member and Richmond’s mayor when the Chevron refinery caught fire. “CSB should be thanked, not attacked, particularly in such an accusatory way by our own congressman,” she said. “I am baffled by DeSaulnier’s approach.”

Reactions to that Chevron accident and to the recommendations that sprang from CSB’s investigation, which called for a national overhaul of refinery regulations, may help explain the mess at the board.

Over his nearly five-year term, Moure-Eraso and CSB faced a string of accidents at oil refineries and production facilities. In 2012, the year of the Chevron accident, CSB documented 125 significant accidents at many of the nation’s 150 refineries. Financial losses from refinery accidents in the U.S. were three times as high as in other oil-producing countries. CSB for years has stressed the need to strengthen safety regulations for U.S. refineries.

In CSB’s recommendations from the Chevron accident investigation, Moure-Eraso and CSB staff offered a sweeping regulatory overhaul. Last year, at a meeting in Richmond, he proposed a “safety case” regime, similar to a system used in the U.K., that would require companies to work with regulators to develop new safety requirements. The proposal called for more inspectors, aggressive regulatory oversight, and greater responsibility on the part of companies to demonstrate that their operations are safe. It would also require companies to consider inherently safer processes, which are a bugaboo for industry.

Opposing this overhaul was a mix of companies, management consultants, and the national United Steelworkers (USW), the union that represents most refinery workers. The city of Richmond backed the safety case approach, as did USW’s local union at the Chevron plant.

Ultimately, the other two CSB members in attendance at the Richmond meeting—Beth Rosenberg and Mark Griffon—voted down the proposal. Both have past ties to USW, and they said Moure-Eraso’s heavy-handed management had left them out of the proposal development process.

In House oversight hearings that followed their thumbs-down vote on the safety case idea, Rosenberg and Griffon strongly criticized Moure-Eraso and top CSB staff. Rosenberg eventually quit the board over Moure-Eraso’s leadership.

However, CSB’s approach was endorsed by a California state working group established by the governor to find new regulatory approaches for the state’s refinery sector in light of the Chevron accident. The state is now exploring regulatory options to implement the recommendations and is hiring a dozen new inspectors. The result could lay the groundwork for the overhaul Moure-Eraso had sought.

In explaining the national union’s opposition, USW Director of Health, Safety & Environment Michael Wright says the safety case is a good concept, but it will not work in the U.S. He says it requires too many inspectors and is too difficult to oversee. It also needs a strong labor movement, which is missing in the U.S., to push for enforcement to counter the power of business.

Wright is also critical of CSB management and Moure-Eraso. In an early March letter to Chaffetz and Rep. Elijah E. Cummings (D-Md.), the top Republican and Democrat, respectively, on the oversight panel, Wright criticized Moure-Eraso and identified morale and organizational problems plaguing the board. He also singled out the January CSB meeting votes that gave more authority to the chairman and canceled three pending accident investigations that were particularly important to USW.

At a March 4 hearing that followed Wright’s letter, Democrats and Republicans on the House Oversight Committee blasted Moure-Eraso. They also criticized the board for a host of management problems as well as its failure to investigate certain accidents and long delays in issuing reports. Much of the questioning during the three-hour-long hearing echoed Wright’s concerns over the management changes and the canceled investigation reports.

The tenor of what seem to be endless congressional investigations disturbs Eric Frumin, health and safety coordinator of Change to Win, a coalition of many of the U.S.’s largest unions.

“These investigations of CSB seem to be fixated on issues that are administrative, and although politically sensitive, the questions are always at least one step removed from the board’s work, what it has actually accomplished,” Frumin says. “The committee’s hearings and inspector general’s report never addressed CSB’s starvation budget and instead criticized the board for not taking on important accidents and not finishing reports rapidly.

“To me, this raises questions about the committee’s and inspector general’s motives. It appears they are not concerned about industrial accidents or if CSB recommendations are adopted by companies and safety agencies. There have been important CSB recommendations that have been outstanding for decades, particularly proposals to regulate reactive chemicals.”

If the letter from the Energy & Commerce Committee signals that the panel is taking an interest in these issues, Frumin says, “it’s about damn time.”