On Target
[+]Enlarge
Credit: Lead Pharma
RORγt with its helix-12 (purple) in the agonist conformation bound to 25-hydroxycholesterol (blue) and the coactivator peptide (orange). 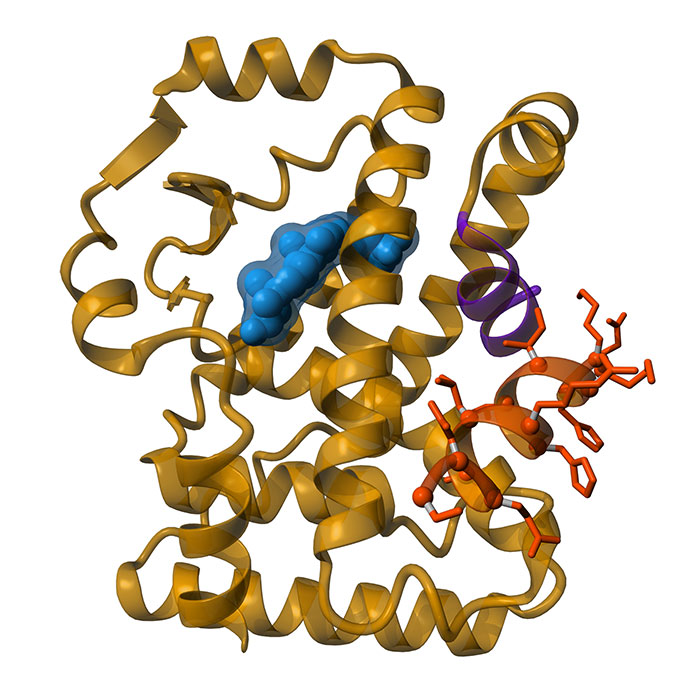 Credit: Lead Pharma
RORγt with its helix-12 (purple) in the agonist conformation bound to 25-hydroxycholesterol (blue) and the coactivator peptide (orange).

Already winners with blockbuster biologic drugs for autoimmune disorders, major pharmaceutical companies are wagering on start-up firms targeting the same diseases with small molecules. Since 2010, they have spent more than $1 billion to secure chemistry-derived drugs that might eventually compete with, or even replace, the antibodies.

If successful, small molecules could win the drug development trifecta relative to biologics: easier to deliver, cheaper to produce, and better at hitting a new target across a broad range of diseases. What they are aiming at is RORγ, a member of a family of nuclear hormone receptors that are well-established drug targets.

A particular isoform of RORγ, RORγt, is a key regulator of the cytokine immune pathway. RORγt drives the differentiation of T cells into T helper 17 (Th17) cells, which then produce the pro-inflammatory cytokines interleukin(IL)-17A and F and the receptor for IL-23. In autoimmune diseases, this pathway is improperly activated.

RORγ is an attractive target because it’s specific to T cells involved in inflammation and not those for immune defense. Thus, blocking it is not expected to cause the immune-compromising effects seen with some antibodies. “The holy grail is to find a novel anti-inflammatory that really has disease-modifying activity, something which inhibits the formation or the action of the pathogenic T cells without affecting the T cells you want,” says Roy Pettipher, a founder of England-based Orca Pharmaceuticals.

It’s the commercial success of antibody drugs for inflammatory diseases that has turned RORγ into a hot target for small molecules. Direct inhibition of RORγt, rather than pursuit of separate cytokines as antibodies do, offers a new and potentially more efficient disease treatment. And the opportunity to offer a small-molecule pill rather than an injected antibody has great appeal to pharmaceutical companies.

Anti-inflammatory biologics first approved in the late 1990s—such as multi-billion-dollar sellers Enbrel, Remicade, and Humira—targeted a cytokine called tumor necrosis factor. More recently, significantly better outcomes have been seen in diseases such as psoriasis from the antibody drugs Stelara and Cosentyx, which aim at IL-17 and IL-23. These new drugs have raised the bar for effective therapies, Pettipher notes.

More important, the newly approved antibodies and others in late-stage trials have validated the clinical significance of the Th17 pathway and the critical role specific cytokines play in autoimmune-related inflammation. At the same time, recent research has shown that small molecules can turn RORγt on and off, hopefully to regulate a select subset of genes involved in inflammation.

“It is very rare for these two things to come together,” Pettipher says. Orca is exploiting discoveries made by New York University molecular immunology professor Dan Littman and his former postdoc Jun R. Huh around the role of RORγ and its inhibition. In February, three-year-old Orca signed an up to $123 million collaboration with AstraZeneca to find small-molecule RORγ inhibitors.

The search for new inhibitors has gone on via partnerships since at least 2008—and before that inside drug firms both big and small. The earliest disclosed deal was signed in 2008 between San Diego-based Orphagen Pharmaceuticals and Japan Tobacco. In mid-2013, the Japanese company started a Phase I clinical trial of a small-molecule inhibitor.

In 2010, Bristol-Myers Squibb agreed to pay up to $285 million for a joint discovery program with South San Francisco-based Exelixis. BMS took over full responsibility for the development program in 2013. Likewise, this year Pfizer took control of a program worth up to $217 million that it started in 2011 with Sweden’s Karo Bio.

GlaxoSmithKline has a toehold as well through Tempero Pharmaceuticals , which has combined screening with genomic analysis to identify inhibitors. GSK created Tempero in 2009 through the spin-off of its immune-inflammation R&D team. Meanwhile, other small companies including Innovimmune Biotherapeutics and Vitae Pharma have independent programs under way.

So far, Lycera has attracted the largest RORγ inhibitor deal, an up to $307 million pact signed with Merck & Co. in 2011. Lycera chief scientist Gary D. Glick, who is on the University of Michigan, Ann Arbor, chemistry faculty, founded the firm in 2006. Its most advanced program remains in-house and focuses on finding RORγ agonists to activate immune mechanisms against cancer.

Lycera’s work on inhibitors didn’t start until 2009. But because nuclear hormone receptors such as RORγ were known to be druggable targets, “the hope was that there would be a relatively rapid path to develop potent, safe, and selective orally available small molecules against the target,” Glick says. 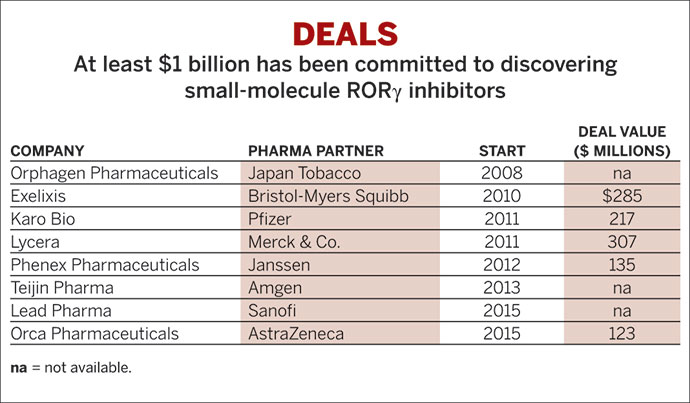 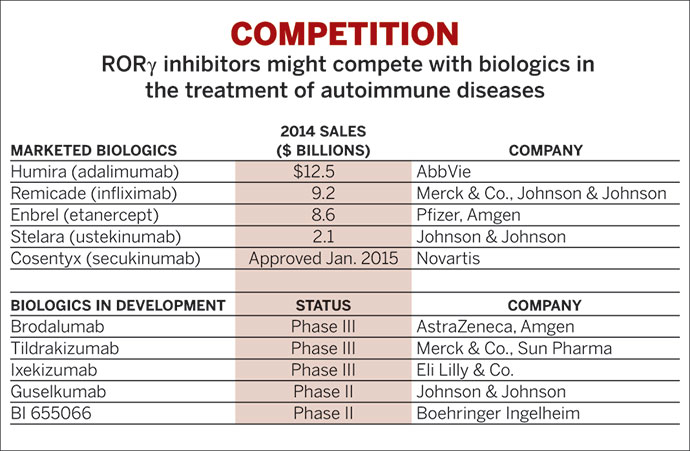 Nuclear receptors make good drug targets because their binding to DNA and regulation of gene expression is in response to small-molecule ligands in the body. But when much of the RORγ research began, the natural ligand wasn’t known—hence the “orphan receptor” label.

“Our chemistry group was able to move forward in the absence of having that information,” Glick says. Since then, both Glick and NYU’s Littman have been at the forefront of work on determining the natural ligands. Opinions differ, but many researchers think they are molecules produced during cholesterol biosynthesis.

Although knowing the natural ligand will help inform future work, to date “it’s been quite tractable to make inhibitors of RORγ,” Orca’s Pettipher says. By solving crystal structures, scientists have developed a good idea of how compounds bind to the ligand-binding domain, he explains. “And they have found compounds that are fairly potent and selective inhibitors, despite not knowing what the ligand is.”

Most of the small discovery companies have used some combination of screening, structure-based drug design, and medicinal chemistry to find their compounds. Germany’s Phenex Pharmaceuticals began work in 2006 and claims to be the first to file for patents on potent RORγ inhibitors. The 13-year-old firm pooled its compounds with ones at Janssen, part of Johnson & Johnson, in a 2013 deal worth up to $135 million.

Although the techniques are similar, the fruit of discovery efforts among the small companies is a surprisingly diverse range of compound structures. “If you look at the patent literature, you see that they are quite different,” says Thomas Hoffmann, Phenex’s chief financial officer. One reason is that RORγ has one of the biggest ligand-binding pockets in its family of receptors. “So you can easily find something potent that binds,” Hoffmann adds.

Complicating the search for drug candidates is that the ligand-binding domain is lipophilic. “Almost inevitably it means the molecules that bind there are also very large and lipophilic,” says Arthur Oubrie, chief scientific officer at Lead Pharma. “That makes it difficult to have druglike molecules with good drug metabolism and pharmacokinetic properties.”

Large compounds aren’t absorbed well, and lipophilic ones are prone to rapid metabolism. Together, these characteristics limit exposure of the drug to the target. According to Hoffmann, research has also determined that the target must be addressed continuously, rather than simply triggered.

“The biology here is much more flexible than we thought, so if the brake goes off, then IL-17 comes back,” he says. “You need a highly efficacious molecule.”

Thus, the trick will be turning early-stage compounds into good oral drug candidates, something most companies are likely to address through medicinal chemistry. With most of the compounds now in the hands of big pharma, however, nothing is being shared about the status of that development process.

So far, the big companies have paid up-front fees and funded R&D to secure their new leads. Also important to their drug development teams is access to an understanding of the biology around the receptor.

Although the antibody drugs on the market have validated the overall Th17 pathway, targeting RORγ specifically has not yet been clinically tested and validated. Genetic studies and animal models have provided support, but researchers want to learn more about how key genes are regulated and if they influence the desired immune response. And they still don’t know if RORγ inhibitors will be safe and effective in humans.

“It’s not entirely clear if this small-molecule target will give us the same efficacy or the same readout” as the antibody drugs, Phenex’s Hoffmann says. But companies are pursuing it nonetheless to protect their autoimmune disease franchises. “Nobody wants to be behind because it is quite a danger for the biologics if a small molecule would emerge,” he notes.

Indeed, some drug industry executives hope that RORγ inhibitors might become as successful as traditional glucocorticoid immunosuppressants. The market research firm Evaluate Pharma predicts that the market for immunosuppressants will nearly double to $15 billion by 2020.

As a result, the small companies had no problem interesting big pharma partners in helping advance their compounds. And on the basis of the success of Stelara and Cosentyx, the two new anti-inflammatory antibodies, industry watchers expect the initial target for many RORγ programs will be psoriasis.

The chronic disease afflicts 125 million people worldwide, according to the National Psoriasis Foundation. By 2023, the psoriasis drug market will reach about $11 billion, according to market research firm Decision Resources.

“While RORγt is not easy to address, this endeavor bears great potential for the treatment of autoimmune diseases,” Sanofi contends. According to its partner, Lead Pharma, researchers have identified 80 to 100 different autoimmune disorders and suspect at least another 40 diseases are driven by immune function.

As drug development moves to big pharma, many of the small firms continue to work on basic biology, including finding biomarkers to identify RORγ-dependent diseases and patients who will benefit. In the meantime, most wait to see if their compounds make the journey through the development pipeline, bringing them milestone payments and ultimately royalties for a new class of drugs.