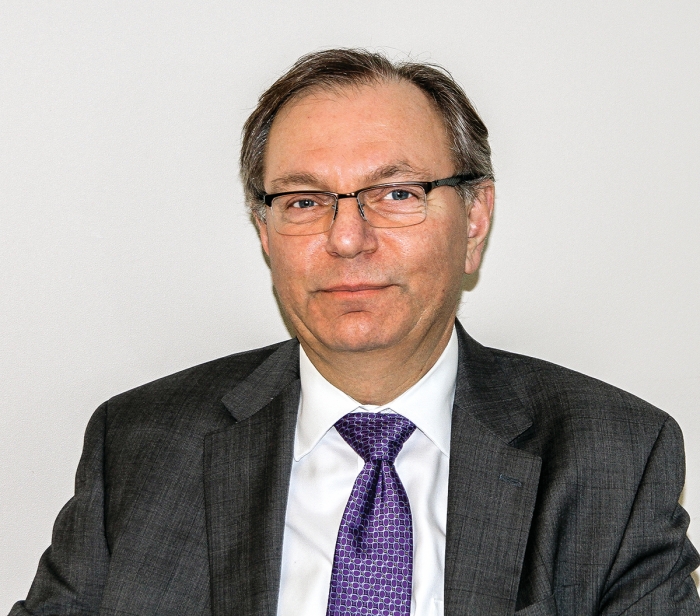 There was little chance that Michael A. Meador wouldn’t become a chemist. His mother had a master’s degree in chemistry, and his maternal grandfather worked for the now-defunct Harshaw Chemical in Cleveland. Like many chemists of the baby boom generation, he fondly remembers his childhood chemistry set.

“I had a pretty clear idea that I wanted to pursue a career in chemistry early in my life,” says Meador, who today coordinates the federal government’s research and development efforts on nanotechnology. “The idea of being able to make new materials or new chemicals—it was pretty intriguing.”

After earning a bachelor of arts in chemistry from Ithaca College and a Ph.D. in physical organic chemistry from Michigan State University, he built a career studying and shaping advanced polymeric materials.

Last year, Meador, 58, was selected to a two-year term as director of the National Nanotechnology Coordination Office (NNCO). He’s on loan from the National Aeronautics & Space Administration’s Glenn Research Center in Cleveland, where he led nanotechnology research and development. In 2010, Meador headed an agency team that prepared a long-range plan for the development and incorporation of nanomaterials in future NASA missions.

“Most of my career has been in managing the implementation of R&D,” Meador tells C&EN. “I know what does and doesn’t work.”

NNCO was established in 2001 as part of the National Nanotechnology Initiative (NNI), a federal R&D enterprise that shapes the nanotech efforts of 20 federal departments and independent agencies. He says the vision of NNI—the ability to understand and control matter at the nanoscale for the betterment of society through technological advances—is being brought to fruition in academic, government, and industry laboratories across the U.S.

NNCO facilitates education and outreach activities for NNI, acts as a focal point for member agency interactions with Congress, coordinates executive branch subcommittee meetings, and prepares budgetary and other strategic plans, he says.

“The job of NNCO is to be the glue that holds NNI together,” Meador says.

One part of Meador’s job is to communicate nanotechnology research to policy-makers and the public. A substantial part of that effort is clearing up misconceptions about risk, he says, and explaining how much scientists understand about nanomaterials.

A lot of work remains to develop tools and techniques needed to determine the fate of nanomaterials in the environment and their effects on humans and wildlife, Meador says. “There’s going to be a push in the next few years to do more of that.”

In President Barack Obama’s fiscal 2016 budget request, nanotechnology research that examines the health risks of nanomaterials would get a boost. The proposal would allocate about 10% of NNI’s $1.5 billion budget to risk assessment research.

NNCO and the Consumer Product Safety Commission will host a technical workshop in July to consider the environmental, health, and safety implications of exposure to engineered nanomaterials.

“NNI is trying to understand risk better with good science,” he says. “We’re thinking about ways that we can do a better job communicating what the risks are.”

Asked to grade NNI on its 15-year performance, Meador says he’d give it a B+. “NNI has done an outstanding job promoting world-class R&D in nanotechnology,” he says. However, he adds, there’s always room for improvement.

In the next 15 years, Meador is eager to see how NNI moves nanotechnology commercialization forward.

Looking back, he says that without the initiative some industries may not exist today. “A good example is quantum dots,” he says, noting that an industry has risen up around the semiconducting nanocrystals.

Meador has worked for the federal government his entire career. He and his wife, Mary Ann Meador, also a Ph.D. chemist, entered the workforce in 1983. Unemployment was high at that time, and the couple, with advanced degrees in the same field, had the classic “two-body” problem of spouses in academia who are looking for positions in the same job market.

At NASA, “we were given the opportunity to attend these one-hour briefings on different topics related to aeronautics and aerospace,” he says. “Being a physical organic chemist doing mechanistic photochemistry, I really didn’t know that much about how airplanes work,” he says.

In the 30-plus years that followed, Meador studied the degradation of liquid lubricants used in aircraft engines, designed high-performance polymers, and developed thermally stable polyimides for aerospace applications. Meador advanced from chemist to chemical engineer to chief of the polymer branch and, most recently, manager of the nanotechnology program.

Even with his moves into management, Meador has continued to focus his attention on the development of nanomaterials. “I have a strong interest and passion for nanotechnology,” he says.