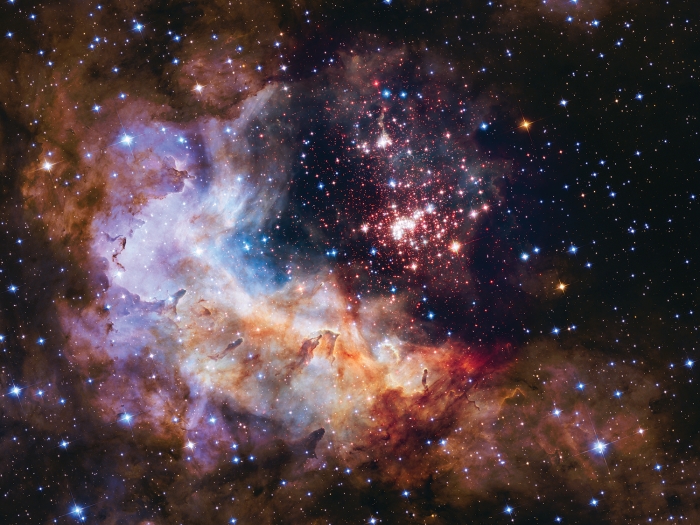 It was 1992, and the Hubble Space Telescope had been in orbit around Earth just two years.

A group of astronomers trained Hubble’s high-resolution spectrograph on an ancient star 100 light-years away and found something never before seen in a star: boron.

This element’s emissions lie in the ultraviolet part of the electromagnetic spectrum—in a range only observable from outside Earth’s atmosphere and only detectable by Hubble at the time.

That early, startling, and chemical-based finding is just one in a lengthy parade of cosmological game-changing discoveries that have cemented Hubble’s place as one of the technological marvels of the modern space age.

Hubble was launched 25 years ago on April 24, 1990. No spacecraft’s birthday has been so elaborately feted: In recent weeks, more than 100 events have been held in the U.S. alone, including the unveiling of an official Hubble 25th anniversary image at the Newseum in Washington, D.C. 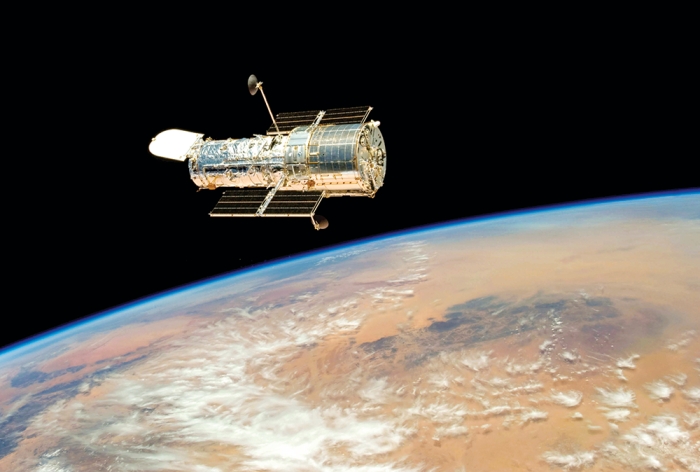 Hubble team members and officials celebrated Friday, April 24, at a private party at the Smithsonian Institution’s National Air & Space Museum; the next day, the museum threw another Hubble party for the public. From April 20–26, Times Square in New York City was alive with celestial Hubble images, broadcast from the area’s iconic Toshiba Vision dual LED screens.

“Hubble has changed the way scientists view the universe, and it’s captured the imagination of the public,” Amber Straughn, an astrophysicist at the National Aeronautics & Space Administration, said during a panel discussion on Hubble’s 25 years at the Space Telescope Science Institute (STScI) in Baltimore.

“It’s been a great 25 years,” Ken Sembach, interim director at STScI, said at the conference. “Hubble is doing science now that was never before envisioned.”

Hubble’s visual stunners have included images of events close to home—the impact of comet Shoemaker-Levy 9 on Jupiter in 1994—as well as those of objects at the edges of the universe, including galaxies that formed only 400 million years after the Big Bang. Hubble found proof of the exotic phenomenon of gravitational lensing, in which dense objects can bend light from an object behind it. Hubble also provided evidence for the acceleration of the expansion of the universe.

Many of the breathtaking images of quasars, interstellar dust formations, and colliding galaxies have become so iconic that it might seem that Hubble’s primary function has been to explore the macrostructure and grand cosmology of the universe.

But Hubble is also, at its heart, a chemist. A full 50% of Hubble’s observations have been made with its spectrometers, which lead to chemical discoveries, says Douglas Duncan, one of the astronomers who made the boron discovery. “Few people know that.” Duncan is now in the department of astrophysical and planetary sciences at the University of Colorado, Boulder, and is also director of Fiske Planetarium.

Although they don’t always lend themselves to spectacular images, Hubble’s chemical discoveries have been some of the most intriguing: the discoveries of sodium, methane, and water in the atmospheres of exoplanets, water in the remnants of a dead star, and a complex organic soup in a solar-system-forming protoplanetary disk.

Hubble’s technological history will also be remembered. The most famous event, perhaps, was the discovery soon after the spacecraft’s launch of an optical flaw in its Wide Field & Planetary Camera. In 1993, astronauts were able to fit the mirror with corrective optics, and soon Hubble was sending back vivid, crisp images.

The telescope has undergone four servicing missions, including the 1993 repair. Traveling via space shuttle, astronauts have journeyed to the spacecraft to replace old cameras and gyroscopes with new ones. The final repair mission was in 2009.

Hubble will keep taking images and data until its instruments give out, NASA says. Scientists are hoping it will last until at least 2020.

In October 2018, NASA is set to launch the first of a next generation of space ­telescopes, the James Webb Space Telescope. Much more powerful than Hubble, Webb will focus on studying infrared wavelengths, which easily penetrate dust and gas that mask objects in space. The telescope will also be able to more completely study the chemical composition of atmospheres on planets outside the solar system. Many organic compounds have characteristic infrared spectra.

“The exoplanet community is very excited about the Webb telescope,” said Jacob L. Bean, an astronomy and astrophysics professor at the University of Chicago. With Webb’s improved precision and infrared focus, astronomers hope to be able to find exoplanets that are truly analogous to Earth.

Hubble may still have a chance to break new ground during its final years, especially if it overlaps with the first years of the Webb telescope: Because Hubble’s instruments observe primarily visible and ultraviolet wavelengths, it could complement Webb’s infrared observations.

According to STScI’s Sembach, “The combination of these two observatories will be very powerful, scientifically.”

Although the spacecraft is best known for its spectacular galactic images, many of its discoveries have been chemical in nature. Here, we highlight a few of those accompanied by artists’ renderings

Dear Reader, after viewing the photo gallery, tell us:

I was fascinated anew with each photo and narrative.

Full disclosure: I work for C&EN. But I just love that Hubble discovered water on a dead star (gallery photo 8/9). So I wanted to share ;)

The discovery of sodium on an exoplanet

Are these legitimate photos taken by Hubble? They look like composites. And are the captions match appropriately? For instance image 4 of 9 looks like a composite of a planet, a comet, and a sun/star but the captions talking about some exo-planet. If this is truly a single image and not a composite, it is an unbelievably lit image and would be my vote for favorite image.

Hubble discovers the first oxygen atmosphere around a planetary satellite:Europa. The question is - will Hubble also discover a black monolith orbiting Jupiter as well?

2004: Hubble detects for the first time oxygen and carbon in the atmosphere of an exoplanet

Physical Chemistry
All Eyes On Comet ISON
Environment
Opportunity Keeps Knocking
Physical Chemistry
Earth Gets A Doppelganger
Share X
To send an e-mail to multiple recipients, separate e-mail addresses with a comma, semicolon, or both.
Title: Hubble Telescope Celebrates 25 Years In Space
Author: Elizabeth K. Wilson
Chemical & Engineering News will not share your email address with any other person or company.