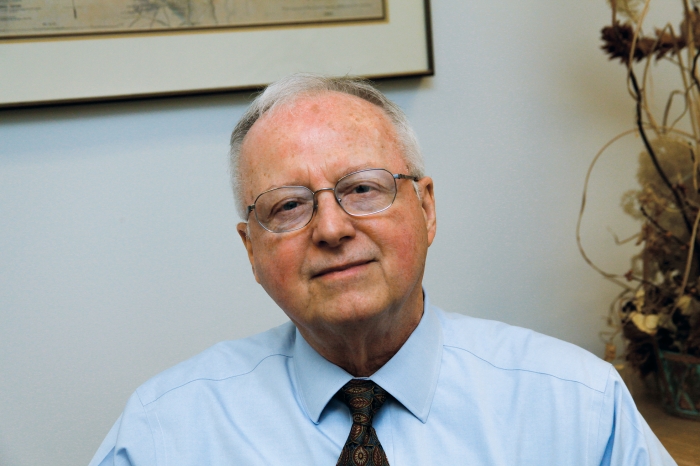 For Michael E. Rogers, working at the National Institutes of Health is the chemist’s equivalent to being a kid with a job in a candy store.

“If you have interests in biomedical science, I can’t think of any better place to be,” he says.

That is what kept Rogers, 69, at NIH for almost 35 years. Through the decades, his career has spanned from peer review to legislative affairs to creating chemistry research programs.

For the past 20 years, Rogers oversaw the majority of chemistry research funded through NIH as director of the Division of Pharmacology, Physiology & Biological Chemistry in the National Institute of General Medical Sciences (NIGMS). “My whole professional life has been combining chemistry and biology,” explains Rogers, who retired on May 1.

Growing up in rural Georgia, Rogers didn’t expect to become a chemist. His parents didn’t finish grammar school, and he was the first person in his family to graduate from high school. But an aunt encouraged him to attend community college. There, he gravitated toward chemistry, inspired by his experience in a high school chemistry class.

Rogers went on to earn a bachelor’s degree in chemistry from Berry College in Georgia. As he neared graduation, he heard a talk given by some pharmaceutical chemists from the University of Mississippi. “I liked chemistry, but the idea of being able to use that knowledge to make drugs? I was totally snowed,” he remembers.

So off he went to graduate school at the University of Mississippi in the department of medicinal chemistry, which he followed with a postdoc at NIH in 1972. After that, Rogers took a faculty position at Virginia Commonwealth University. When it became clear he wasn’t going to get tenure, he returned in 1980 to NIH, where he remained until last week.

Rogers started out overseeing grant review in what was then called the Division of Research Grants. He founded the bioorganic and natural products chemistry study section and chose its first members. “I always considered it one of the great wonders of the world that they let me do that,” he says.

A few years later, Rogers took a six-month assignment working on the Senate’s Labor & Human Resources Committee, which was then led by Sen. Edward Kennedy (D-Mass.). “That was a blast,” he says, pointing out a picture of himself and Kennedy hanging in his office. “I didn’t have any power. But just because I was there, people thought I did.”

While on detail in Congress, he became more interested in the research programs at NIH, so when he came back to the agency he joined NIGMS. He became acting director in 1993 of what became the Division of Pharmacology, Physiology & Biological Chemistry, which funds approximately 60% of NIH chemistry research, he says.

That has put Rogers in a position to make vital investments at the intersection of biology and chemistry. One of the most important may have been creating grants to train chemists in biological concepts, he says.

In the early 1990s, “if you were a chemist and you wanted to get some training in biology, it wasn’t necessarily that well accepted,” Rogers remembers. The program, he says, “provided validation for a lot of people who wanted to work at the chemistry-biology interface,” an area that is booming now.

Looking back, one the most exciting times to work at NIH was in the late 1990s, when the agency’s budget doubled. “We were able to start some programs that we wouldn’t have been able to do otherwise,” he says. One example is the agency’s so-called glue grants, which fund large-scale team research projects in many fields, including chemistry.

The financial situation now is significantly different. “You have more people competing for the same money, and the money doesn’t goes as far,” he says.

One of Rogers’s biggest concerns is the pressure this puts on young scientists, who feel like they have to make a major breakthrough to get a job and research funding. “The thrill of discovery itself gets lost,” he says.

That thrill is what has kept Rogers engaged through the years. He sees the human microbiome as an up-and-coming research area for chemists. “We know relatively little about the chemical communication that goes on between gut bacteria and the body,” he says. “That offers a lot of opportunities for chemists.”

He has also been leading a push into quantitative and systems pharmacology research, which looks at the body as a system and how a drug interacts broadly within it. “That is the one area I really hate to give up,” he says.

Rogers says what he’ll miss the most, besides the people at NIH, is that amazing sense of discovery. “If you are following science, it is like following your favorite TV drama because there is always a new development.”