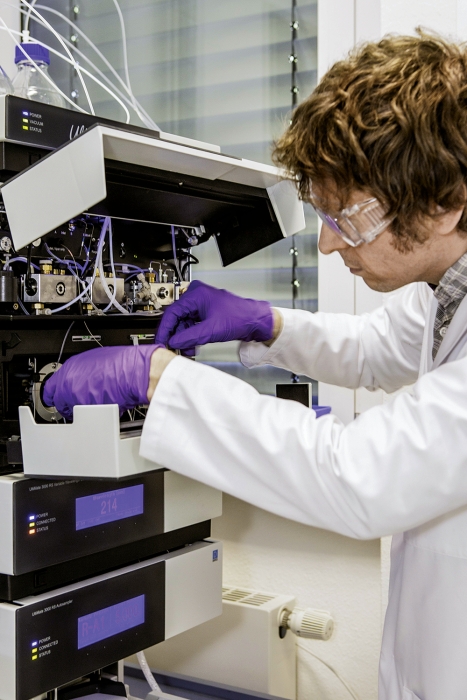 Credit: Thermo Fisher
State-of-the-art asset management is evolving toward greater automation in the scheduling, maintenance, and repair of lab instruments.

Michael F. Pope Jr., senior laboratory services consultant at Agilent Technologies, dashes off an e-mail in the middle of a telephone interview. It contains the definition of laboratory asset management found in the International Organization for Standardization’s newly published ISO 55000 standard. In Pope’s estimation, the definition is something of a landmark, a long-missing focal point for a vexingly amorphous discipline.

His enthusiasm might seem a tad extreme. ISO standards for most information technology (IT)-supported business practices are well established. And they read like rather bland, obvious statements to the layperson, the new one being a case in point: “Systematic and coordinated processes and practices by which a laboratory enterprise optimally and sustainably manages its laboratory assets and laboratory systems.”

But, as Pope sees it, simply having a new standard for asset management validates a flurry of activity on the part of Agilent, PerkinElmer, Thermo Fisher Scientific, and other scientific instrumentation firms working to introduce automation to the practice for customers in pharmaceuticals and other industries.

Each of these companies has debuted new software or upgrades to asset management platforms in the past year. And managers at each firm point to an emerging category of IT in the lab: enterprise asset management systems (EAMS), designed to gather intelligence about instruments and supplies across large, multilaboratory organizations to streamline preventative maintenance, coordinate the movement of equipment from lab to lab, and increase efficiency in purchasing.

At present, though, the category is a muddle. “The definition of asset management is murky and gray,” Pope says. “As you talk to people, they all have their own spin on what it means.”

Moreover, the diversity of instrumentation in laboratories poses a challenge to any one vendor seeking to devise software that can access data across a user’s entire research operation. To date, the managers who run drug industry labs see little in the way of commercial software that can provide adequate surveillance of myriad instruments spread over multiple sites.

The obstacles companies face in developing EAMS software are cultural as well as technical. A resistance to IT and automation, typical in the scientific research community, is particularly strong when it comes to centrally managing laboratory tools. Whereas asset management systems have moved smoothly into the tech sector, the pharmaceutical industry is having a hard time coming to grips with the very idea of EAMS, Pope says.

“Being big and conservative—and run by scientists—drug research hasn’t seen the need for it until very recently,” he says.

Daniel R. Matlis, president of market analysis consulting firm Axendia, says drugmakers are becoming more interested in EAMS following recent Food & Drug Administration scrutiny, such as the agency actions that led to the closure of Boehringer Ingelheim’s Ben Venue Laboratories plant in 2013 because of quality and equipment maintenance shortfalls. Although that case and others mostly concerned manufacturing assets, the industry has responded with a push to improve asset management in the lab as well, Matlis says.

The problem many pharma companies face, according to Matlis, is that most asset management IT available for the lab was designed to monitor basic use of scientific instruments that tend to stay in one place, typically in a manufacturing plant. Such software can tell you an instrument’s setting before and after use, he says, but what is missing is feedback on performance during operation.

Matlis compares current lab asset management practices—fixing things on a schedule rather than according to how they are performing or based on data from operations—to changing the oil in a car every three months or 3,000 miles without taking into account the quality and condition of the oil or engine operation.

Peter Grandsard, executive research director at Amgen, is one of the architects of his company’s Laboratory Asset Management Program (LAMP), which seeks to bring centralized oversight, based on automated monitoring of data, to a network of labs that all have their own routines. Amgen is working with Agilent, but Grandsard says software for R&D laboratories is still at an early stage of development.

“It’s my opinion that there is no mature product yet, whether IT or a set of processes, that will truly facilitate corporate-wide management of lab assets,” Grandsard says. What is lacking, he argues, is software that can retrieve information from an equipment maintenance database and from individual instruments, “so that you don’t have to use ‘sneakernet’ any more to see who has what. Can I share it? Can I use it? Is it a lemon? Do I need to retire it?”

Grandsard points to Agilent software called Remote Advisor that offers useful data about instruments in a lab but is effective only on Agilent products. More generally, he cites a lack of standard communication protocols for intelligent instruments as an impediment to the kind of “gateway” IT system he would like to establish at Amgen.

“The state of the art right now, beyond simple spreadsheets, is a homemade solution. It is a worse-than-suboptimal situation, really,” Grandsard says.

Agilent’s Pope says that’s a fair assessment. He notes, for example, that Remote Advisor can only interrogate Agilent instruments and Waters chromatography tools. An upgrade is due in February that will bring the ability to access data from other vendors’ instruments. It will not, however, be able to plumb every instrument in a lab to the depth at which it can monitor Agilent gear. 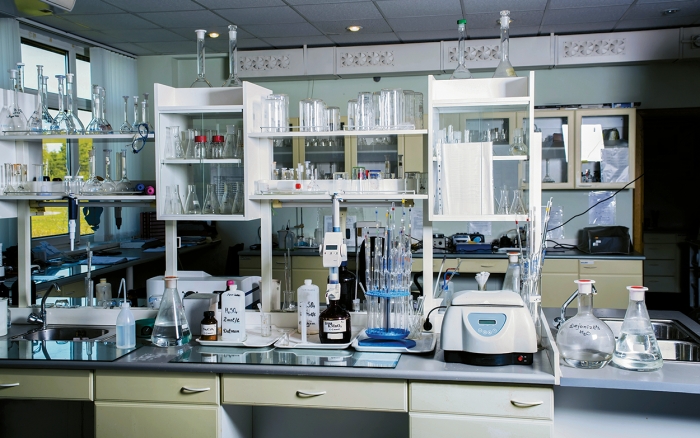 Credit: Shutterstock
Lab managers and their instrument suppliers are struggling to impose order over a chaotic sprawl of research assets.

Software developers agree that the sector is under construction. What new EAMS software is building into lab asset management, they say, is a utilization and performance dimension—data on real-time operations such as signal drift or other indications that maintenance is required—that is lacking in production-oriented systems.

For example, PerkinElmer’s asset management IT suite, OneSource, was updated last year with a mobile device and a user dashboard, each designed to provide easier access to information in a company’s OneSource asset management database. These features also allow users to log service requests and upcoming events that will impact instrumentation requirements.

“We want to empower users to derive more value from the data that they already have,” says David Levy, PerkinElmer’s director for asset informatics and analytics. The goal is to establish a system that can keep up with the nonlinear developments in R&D. “Science is not a production line,” he says. “There is a lot of dynamic work going on in laboratories.”

Having downsized staff and closed laboratories, many drug companies are now struggling to keep up with the volume of work and are also looking to reduce the cost of operations, Levy says. “We thought we could help by providing customers with an infrastructure that will allow them to do what they do more easily and spend more time doing science, less time doing paperwork.”

As for monitoring instruments from multiple vendors, Levy points to software features called LimsLink and Asset Genius, which are able to monitor utilization trends from any personal computer-driven instrument.

Similarly, Thermo Fisher has introduced a tool called SmartCapture that it claims can monitor usage trends in instruments from multiple vendors. The technology can be installed on a single instrument, or on a computer in a lab connected to multiple instruments, according to Steven J. Kelly, a product manager at Thermo Fisher. The company is also developing mobile applications for its technicians and users as part of its Unity Lab Services asset management business.

Like others, Kelly says predictive asset management is gaining traction in the pharmaceutical industry long after it did in other industries. “This industry tends to be time based,” he says. “Preventative maintenance. Pure corrective action when things break. Where this industry is headed is looking at how the equipment is being used and how much it is being used, determining when to perform maintenance based on when it is required.”

Waiting in the wings as EAMS suppliers and users grapple with R&D asset management is an IBM system called Maximo that is commonly used in clinics and manufacturing plant labs, where it has been useful in generating data required by regulators.

Maximo, according to Pete Karns, director of product management at IBM, was introduced about 20 years ago and has evolved to serve customers in oil and gas, nuclear power, the life sciences, and other regulated industries. IBM has developed the system to meet FDA’s current Good Manufacturing Practices standard, a step that helped Maximo become the leading asset management software for manufacturing. Karns says customers are now looking at what the software can do in R&D.

Amgen’s Grandsard says Maximo has an inside track on IT support for the LAMP asset management project his firm is undertaking. “Our gap analysis has pointed out that Maximo has more functionality than what we are currently using.”

Christian R. Strom, service assurance and contract manager at Bristol-Myers Squibb, also indicates that Maximo may be the most powerful asset management tool at hand. But BMS also has signed on for Thermo Fisher’s Unity Lab Services, and Strom says he is enthusiastic about the prospects for Thermo Fisher’s SmartCapture.

In general, Strom sees databases and mobile devices increasing in sophistication to the point where they will be able to effectively improve management programs such as obsolescence mitigation for large fleets of instruments. But they are not there yet: “Asset utilization is a very difficult thing to get your hands around,” he says. “People are concerned you are going to take their instrument away or that you are going to mess up their instrument with some foreign piece of software.”

BMS also recently implemented a radio-frequency identification technology (RFID) program to track lab assets. It’s a step forward, but given the slow hold IT is taking in the laboratory, Strom says he is experiencing a level of frustration comparable to what Amgen’s Grandsard expresses.