Strike while the iron is hot, advises the old adage. Chemists in California have now taken that blacksmith’s advice to heart, using an iron catalyst to forge secondary amines from nitroarenes and olefins. The reaction provides chemists with a new tool to prepare a tough-to-synthesize set of compounds from inexpensive and abundant starting materials. It’s expected to be useful in crafting pharmaceuticals and agrochemicals. 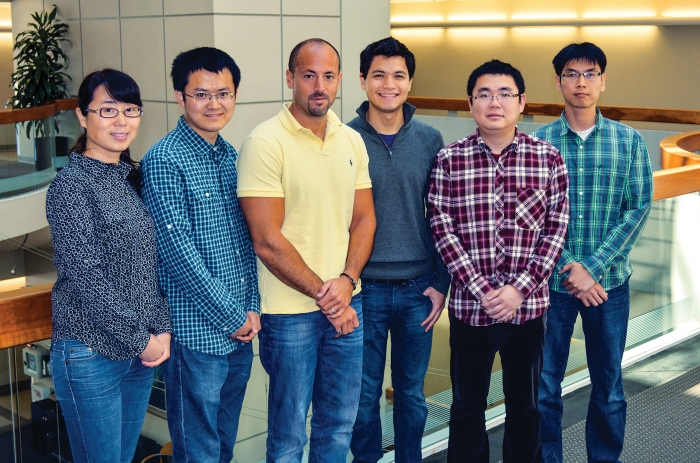 “If you’re going to make a secondary amine, there are really just a few ways to do it,” says Phil S. Baran, an organic chemist at Scripps Research Institute, in La Jolla, Calif., who spearheaded the new reaction’s development. Chemists in Baran’s lab discovered that they could create secondary amines—even ones that are sterically hindered—by using an iron catalyst and a silane reducing agent to coordinate the coupling and reduction of a nitroarene and an olefin (Science 2015, DOI: 10.1126/science.aab0245).

Baran and colleagues report 113 examples of the new transformation, including those with substrates that contain functional groups, such as alcohols and boronic acids, which wouldn’t necessarily be tolerated by other reactions that make secondary amines.

“It’s a fundamentally new way to make amines, which are arguably the most important building block used in modern medicinal chemistry,” Baran says.

To demonstrate the reaction’s utility, the chemists used it to make an intermediate en route to an HIV-1 reverse transcriptase inhibitor in a single step. A previous synthesis took three steps to make this same compound, a synthetic route that Baran estimates costs about $1,450—including materials and labor—to make 1.5 g. Baran reckons that the shortened strategy, which requires less expensive materials, would slash the synthesis cost to about $60 for 1.5 g.

“This is modern alchemy,” Baran says. “We try to take very low value starting material, and with a minimal amount of effort, convert it to a high-value product, which conceptually is identical to what alchemists were trying to do.”

The reaction is not without its limitations, Baran and colleagues point out. It doesn’t work well on nitroalkanes, for example. Also, two to three equivalents of olefin are required, which isn’t ideal if the olefin is expensive or requires a complex synthesis.

Even so, László Kürti, an organic chemistry professor at Rice University who specializes in amines and nitroarenes, thinks the transformation will be widely applicable in both academic and industrial labs. “To me, this is a really clever and effective way of getting to these complicated compounds,” Kürti says. “If you look at the substrate scope, it’s amazing. I don’t see many papers where you have over 100 examples. That is a testament to the robustness of this method.”

Baran tells C&EN that he hopes the paper’s extensive supporting information will provide chemists with all the information they need to do the reaction. He and his lab will also address questions about it on their Open Flask blog. “We really want people to be able to adopt this immediately,” Baran says.

Synthesis
Functionalized Biaryls By Organocatalysis
Synthesis
Classic Addition Reaction Gets A Makeover
Synthesis
Ketones Couple With Olefins In Alkylation Advance
Share X
To send an e-mail to multiple recipients, separate e-mail addresses with a comma, semicolon, or both.
Title: Iron Catalyst Forges Secondary Amines
Author: Bethany Halford
Chemical & Engineering News will not share your email address with any other person or company.

Comments
Dr. Moballigh Ahmad (May 22, 2015 2:52 AM)
Its great work and Congratulations to authors. But I am in disagreement with Prof Baran's following statement

“It’s a fundamentally new way to make amines, which are arguably the most important building block used in modern medicinal chemistry,” Baran says.

This is basically a cascade of two reaction in one pot reduction followed by Hydroamination reaction. This is smart solution but I don't know whether it is "fundamentally new".

I have requested the article and have not gone through all the details but this what is my first impression is.