Taking Shots On A Signaling Goal

Large drug companies, and a small one, attempt to score with soluble guanylate cyclase modulators

Bayer Healthcare spent 20 years to get from discovery to approval of the first in a class of modulators of the enzyme known as soluble guanylate cyclase, or sGC. In 2013, the Food & Drug Administration approved the company’s drug Adempas (riociguat) for treating two types of pulmonary hypertension. Approval followed in Europe in 2014 and in Japan this year.

Bayer scientists targeted sGC because they figured that modulating the enzyme could prove therapeutically important in many kinds of heart disease as well as other conditions. When nitric oxide (NO) binds to sGC, the enzyme generates cyclic guanosine monophosphate (cGMP). This signaling molecule triggers vasodilation, which decreases blood pressure and improves blood flow. cGMP also helps regulate platelet aggregation, fibrosis, and inflammation.

In many diseases, the NO-sGC-cGMP pathway is disrupted by impaired NO synthesis or sGC activity, which cause deficiencies in cGMP. Among the relevant diseases are cardiovascular ones, including pulmonary hypertension and heart failure.

Although heart disease is a competitive field for drug development, there is still room for therapies that work better than existing drugs. Restoring the NO-sGC-cGMP pathway offers a novel mode of action that many big companies are chasing. Despite the crowds, one small firm, Ironwood Pharmaceuticals, is trying to elbow in with its approach.

For more than 135 years, the treatment of cardiovascular disease has been through NO-donating molecules, such as nitroglycerin. Although effective, especially in acute situations, NO donors have limitations and side effects.

Early work by Bayer helped redirect R&D from the NO trigger to the sGC switch. In the early 1990s, while screening for compounds to increase NO synthesis in the body, Bayer scientists discovered sGC stimulators, the firm explained in a 2013 review of the field (Angew. Chem. Int. Ed., DOI: 10.1002/anie.201302588). A few years later, they also serendipitously found sGC activators.

Modulators of sGC come in two forms. Stimulators cause sGC, which naturally contains a heme cofactor, to become more sensitive to low levels of NO and functional even without NO. Activators work when the heme portion of sGC is missing or has been oxidized, and thus is insensitive to NO.

However, the progress of these firms into clinical trials has been spotty, particularly for activators. Dangerously low blood pressure, or hypotension, halted some Bayer studies of cinaciguat about five years ago. And development of ataciguat from Hoechst Marion Roussel (now Sanofi) appears to have stopped around 2009 after Phase II trials.

Mark Currie, chief scientific officer at Cambridge, Mass.-based Ironwood, argues that the body inactivates sGC for a reason, so it’s not surprising activators have proven problematic. “All of a sudden all this enzyme that was parked starts becoming active and cranking out cGMP,” he explains. “When that happens, it is almost impossible to control the hypotensive effects.”

Many companies “put a lot of effort into activators, and it turned out that was a wrong path,” Currie asserts. Ironwood decided to place its bets on stimulators to “tune,” rather than “light up” the NO-sGC-cGMP pathway. Stimulators are “a very interesting way to basically repair what is broken but not take it too far,” he adds. 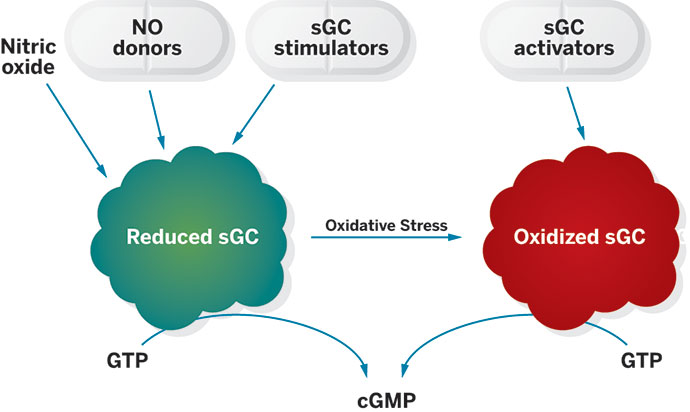 Ironwood’s sGC program has been under way for about seven years. It is built on the firm’s expertise in developing agonists of guanylate cyclase-C, a related membrane-bound enzyme found mainly on the surface of the intestine. In 2012, FDA approved Ironwood’s gastrointestinal drug linaclotide, which had sales of about $300 million in 2014.

In its review paper, Bayer said most of the proposed sGC stimulators are structurally similar to its first-generation compounds. According to Currie, this includes Merck’s compounds. In fact, in late 2014, Bayer and Merck combined their sGC programs, in a deal in which Merck agreed to pay $1 billion up front and up to $1.1 billion in milestones. Merck’s program includes the stimulator vericiguat, now in Phase II studies for treating heart failure.

But Ironwood’s library of compounds is “very different than the Bayer-Merck chemistry,” Currie says. That’s important, he adds, for reasons of intellectual property as well as for how the drugs perform. Ironwood began Phase I testing of a candidate, IW-1973, in March and plans to move IW-1701 into studies later this year.

The structural differences “allow us to go after different diseases,” Currie says. For example, whereas riociguat gets distributed largely in blood vessels, IW-1973 appears to move farther into peripheral and deep tissues, he notes. That property could make it useful for treating fibrotic conditions, he suggests.

Modulators of sGC have a long way to go in the clinic and in the marketplace. Although Bayer remains bullish on Adempas, analysts have been disappointed. Around the time it was approved, stock analysts predicted annual sales would top $700 million by 2018. But with 2014 sales at $100 million, they have slashed their predictions nearly in half.

In pulmonary arterial hypertension (PAH) trials, Adempas didn’t appear to perform much better than other vasodilators, according to Andre Sawyer, a research analyst with London-based DrugAnalyst. And although Adempas is the first and only drug approved for inoperable or persistent chronic thromboembolic pulmonary hypertension, this small indication is a “niche of a niche,” he adds.

In the meantime, alternative, non-sGC-targeted PAH therapies are raising the bar. Recent clinical trials suggest that combination therapies can outperform single drugs, Sawyer explains. And in heart failure, which is a bigger market than PAH, a combination therapy from Novartis has shown never-before-seen survival benefits.

“I am not aware of equivalent combination trials with Adempas,” Sawyer says. But he anticipates that Bayer and Merck will soon pursue combination therapies as well as follow-ons to Adempas.

Beyond the cardiovascular field, Ironwood hasn’t disclosed specific diseases it will pursue in clinical trials. But Currie is excited about the many long-term prospects that targeting sGC offers. “It is rare in drug discovery to have the opportunity to modulate one of the fundamental regulators in the human body,” he says.

Drug Development
Sanofi to acquire BTK inhibitor firm Principia for $3.7 billion
Mergers & Acquisitions
Takeda considers a takeover of Shire
Pharmaceuticals
Notable drug failures in 2017
Share X
To send an e-mail to multiple recipients, separate e-mail addresses with a comma, semicolon, or both.
Title: Taking Shots On A Signaling Goal
Author: Ann M. Thayer
Chemical & Engineering News will not share your email address with any other person or company.