PIECING TOGETHER A PATHWAY 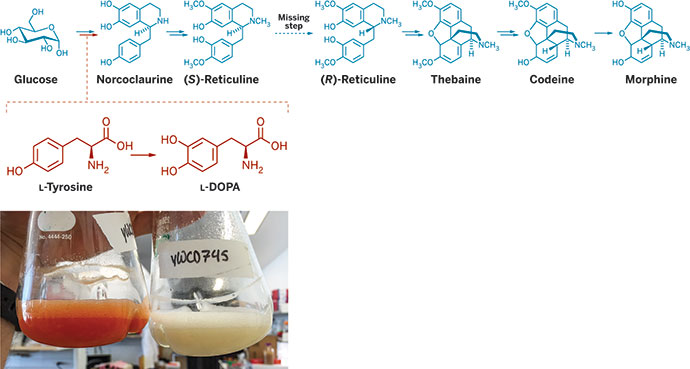 Credit: John Dueber/C&EN
The biosynthetic pathway between glucose and morphine in yeast is nearly complete. Still missing is the conversion of (S)- to (R)-reticuline. The compounds pictured here are key intermediates. One roadblock was an early reaction converting l-tyrosine to l-DOPA. The flask on the left contains a yeast strain with a color-changing biosensor (appears orange here) that detects l-DOPA. The flask on the right contains a strain that produces (S)-reticuline.

For the better part of a decade, scientists have been trying to engineer microbes to produce morphine and other opioid painkillers directly from glucose. Some say such engineered microbes could reduce global reliance on poppy farming to make painkillers. Others want to create microbes like these as a platform for producing improved painkillers and therapeutics.

[+]Enlarge
Credit: John Dueber/C&EN
The biosynthetic pathway between glucose and morphine in yeast is nearly complete. Still missing is the conversion of (S)- to (R)-reticuline. The compounds pictured here are key intermediates. One roadblock was an early reaction converting l-tyrosine to l-DOPA. The flask on the left contains a yeast strain with a color-changing biosensor (appears orange here) that detects l-DOPA. The flask on the right contains a strain that produces (S)-reticuline.

Credit: John Dueber/C&EN
The biosynthetic pathway between glucose and morphine in yeast is nearly complete. Still missing is the conversion of (S)- to (R)-reticuline. The compounds pictured here are key intermediates. One roadblock was an early reaction converting l-tyrosine to l-DOPA. The flask on the left contains a yeast strain with a color-changing biosensor (appears orange here) that detects l-DOPA. The flask on the right contains a strain that produces (S)-reticuline.

So far, researchers have managed to program yeast to perform parts of the pathway from glucose to morphine. Two teams have now come closer than ever to cobbling the pieces together. And their success is raising concerns about what to do when an efficient morphine-producing yeast strain is finally developed, given its potential use not only for the legal production of painkillers but also for the illegal production of drugs.

In two publications, the teams report the front and back halves of the morphine biosynthetic pathway. Vincent J. J. Martin and coworkers at Concordia University, in Montreal, took care of the back half, engineering yeast to produce morphine’s immediate precursor, codeine, starting from (R)-reticuline, an intermediate in the pathway (PLOS ONE 2015, DOI: 10.1371/journal.pone.0124459). Last year, Christina Smolke’s group at Stanford University reported yeast that could make codeine, morphine, and several other opioids, but the researchers started from thebaine, an intermediate further down the pathway.

For the front half of the pathway, John E. Dueber’s group at the University of California, Berkeley, in collaboration with Martin’s group, engineered yeast that can produce (S)-reticuline from glucose (Nat. Chem. Biol. 2015, DOI: 10.1038/nchembio.1816). They chose (S)-reticuline as their target because it’s an intermediate along the pathway to making more than 2,500 members of the benzylisoquinoline alkaloid family. Morphine and related compounds make up one branch of this family. Other benzylisoquinoline alkaloids have promising anticancer and antibiotic activity, Dueber says.

A significant hurdle on the way to (S)-reticuline was an early step, the hydroxylation of the amino acid tyrosine to form 3,4-dihydroxyphenylalanine, better known as DOPA. After yeast feed on glucose, they naturally produce tyrosine. Martin’s group was trying to find an enzyme that could efficiently convert the tyrosine to DOPA. William C. DeLoache, one of Dueber’s graduate students, developed an enzyme-based biosensor to make the screening process easier: It turns DOPA into betaxanthin, a yellow fluorescent pigment. So when a candidate enzyme successfully creates DOPA from tyrosine, the test solution changes color.

The researchers guessed that sugar beets possessed the enzyme they were looking for. That’s because the beets’ distinctive purple color arises from a compound generated after the tyrosine-to-DOPA conversion. Dueber and his team lucked out with one of the first sugar beet enzymes they tried.

After that, Dueber collaborated with Martin’s group to find an enzyme called norcoclaurine synthase to fix another bottleneck in the pathway. Martin has been involved with several plant genome projects in Canada. “Through our plant genomic efforts, we had candidates we could test and give John to put in his yeast,” Martin says.

In the second part of the pathway, Martin and his coworkers identified enzymes that could produce the codeine precursor the­baine from (R)-reticuline. In earlier work, Smolke and her coworkers thought they had engineered yeast that could generate both (R)- and (S)-reticuline (Nat. Chem. Biol. 2008, DOI: 10.1038/nchembio.105). But it turned out that the plant enzymes engineered into Smolke’s yeast produced only (S)-reticuline.

Without (R)-reticuline, the next enzyme in the pathway didn’t work, so the yeast couldn’t go on to produce thebaine, which put the brakes on the journey toward morphine. Martin’s group has now shown that, when fed (R)-reticuline, Smolke’s original enzyme works quite well. With this enzyme, Martin’s yeast produced codeine, a precursor of morphine. If fed supplemental codeine, the yeast also produced morphine.

The two new reports are missing only one step to complete the pathway from glucose to morphine: the conversion of (S)-reticuline to (R)-reticuline. Martin and Dueber expect that step will be reported within the next year. After that, it will be feasible to develop a yeast strain capable of converting glucose to morphine.

Even then, plenty of engineering will still be needed to make such a morphine-producing yeast strain efficient. “When you’re doing metabolic engineering, you have to be careful to optimize each step and balance everything carefully,” Martin says. “If you lose efficiency at any of the steps, by the time you get to the 10th step, you don’t have any product left.”

But the very fact that the end is in sight has spurred Dueber, Martin, and others to start thinking about what precautions might be needed to safeguard against misuse of such a yeast strain.

When Dueber and Martin saw how quickly the individual pieces of their collaboration fell into place, they started to worry that the technology could be used to produce illicit narcotics.

“We’re not blind. We see potential misuses of the technology,” Martin says. “We want to be ahead of the curve. Let’s not ignore it. Let’s deal with it because it’s going to happen.”

Someone who was motivated to make morphine could probably engineer an efficient yeast strain in two or three years, Dueber says. “We felt it was imperative to contact policy experts to start thinking about this now rather than waiting until it becomes a reality and having a reactionary response,” he says.

They approached Kenneth A. Oye, a science policy researcher at Massachusetts Institute of Technology, and Tania Bubela, an expert on public health law and biotechnology policy at the University of Alberta, to make recommendations for controlling the efficient morphine-producing yeast strains that they think are on the horizon. Those recommendations, which address the potential for “home-brew” opiates, appeared in a commentary in the May 21 issue of Nature (2015, DOI: 10.1038/521281a).

Oye, Bubela, and J. Chappell H. Lawson, also of MIT, make recommendations related to the engineering, screening, security, and regulation of engineered yeast strains. They recommend designing yeast strains to be used in production labs that are “less appealing to criminals” because the strains require unusual combinations of nutrients. They also recommend that the genes in the pathway be added to the list used by DNA synthesis companies to screen legal purchasers. In addition, they call for the licensing of labs that work with such strains and for making the release and distribution of the strains illegal.

Smolke agrees that it’s important to start discussion about future regulatory needs, but she calls the commentary’s focus on home-brew morphine inflammatory and unbalanced. She argues that it downplays the problems of the current supply chain involving poppy farming for both licit and illicit drugs, such as security issues and environmental effects.

The authors envision circumstances in which “anybody could gain access to these strains and make morphine beer with a home-brew kit,” she says. “They don’t acknowledge that when you have these highly engineered strains, they don’t grow well.”

Although Dueber and Martin have assembled most of the pieces for morphine production in yeast, their main interest is in using the yeast as a platform for synthesizing new natural products. In the case of morphine, “the main benefit would not be making a direct replacement of morphine but making an analog of morphine that has better properties,” Dueber says.

The platform gives the researchers the ability to produce “chameleon molecules,” Martin says. These compounds, such as (S)-reticuline and thebaine, could be used in a variety of reactions to make many different structures.

And that potential as a platform for natural product diversification is exactly why Dueber and Martin are so eager for the regulatory conversation to start now.

“No one can make morphine and codeine from glucose at this stage. We’re just publishing the recipe,” Martin says. “Let’s deal with this now. The last thing we want to do is shelve a really useful technology because of the perceived potential for risk.”