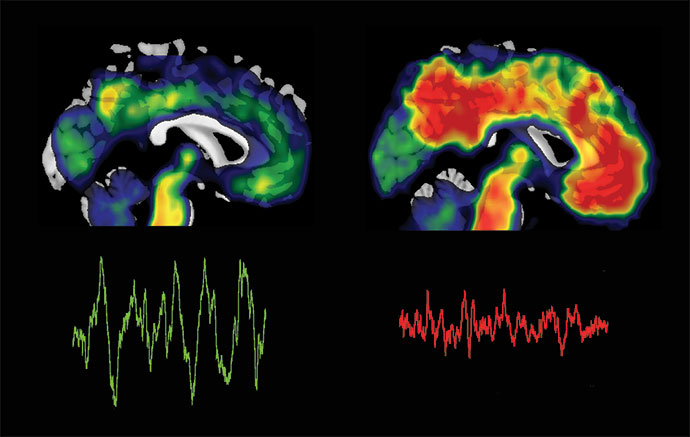 Patients with Alzheimer’s disease accumulate amyloid-β in their brains, forming plaques of the peptide. Many scientists think these deposits, or the high levels of the peptide itself, eventually lead to cognitive deficits, including memory loss. Researchers now report that the accumulating peptide may erode memory, in part by disrupting the deepest stage of sleep.

The results, according to Bryce A. Mander of the University of California, Berkeley, and his colleagues, suggest that disrupted sleep could become an effective early marker for the disease and that improving the quality of sleep could improve cognitive function in Alzheimer’s patients (Nat. Neurosci. 2015, DOI: 10.1038/nn.4035).

Although amyloid accumulation has been linked to memory dysfunction in people with Alzheimer’s, the underlying mechanism is unknown. One fact that complicates the amyloid-memory connection is that the peptide builds up largely in the front of the brain, in particular in the medial prefrontal cortex, away from the hippocampus, the region that facilitates memory formation.

The UC Berkeley-led team thought nonrapid eye movement (NREM) sleep might be the key between the peptide and memory because of NREM’s connection to the medial prefrontal cortex. This dreamless part of sleep is the deepest, Mander says. “It’s the time when you are most knocked out and your brain is the farthest away from consciousness.”

During NREM sleep, the medial prefrontal cortex generates large, slow electrical signals as many of its neurons fire in unison. Previous studies have shown that people are better at forming stable, long-term memories when they have more of this so-called slow-wave activity during sleep. So Mander, a postdoc in the lab of Matthew P. Walker, wondered if greater accumulation of amyloid led to reduced slow-wave activity, and, in turn, poorer memory.

Mander and his colleagues tested the hypothesis by studying 26 older adults who showed no signs of dementia or Alzheimer’s. They measured the amount of amyloid in their brains using positron emission tomography and a radiolabeled molecule that binds the peptide. The team asked the volunteers to learn 120 pairs of words before going to sleep in the lab for eight hours. The researchers measured brain activity during the night with electroencephalography.

When the researchers used a statistical model to analyze the levels of amyloid, the amount of slow-wave activity, and the subjects’ memory of the word pairs the following day, they found a strong connection confirming the hypothesis.

“The study’s conclusion is interesting and important, because it ties together several independent lines of research showing that amyloid can affect memory and sleep,” says Brendan P. Lucey of the Multidisciplinary Sleep Medicine Center at Washington University in St. Louis.

But Lucey points out that more data are needed to strengthen this model. A multiyear study following a set of subjects, Lucey says, should allow researchers to watch how changes in amyloid levels lead to changes in sleep and memory. Mander says he and his colleagues have planned such an experiment and recently received funding to conduct it.

Comments
David Horstman (June 10, 2015 4:13 PM)
I have seen lots of promising research on dementia in C&EN and other publications. Who puts all of this data together to get the best approach for treatment of this deadly condition? Before too long the majority of people will be over 65 and susceptible.
Reply »