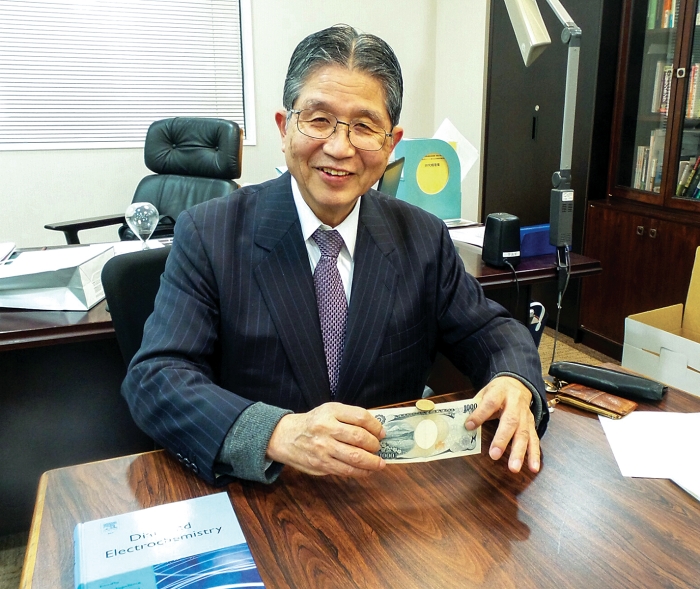 Akira Fujishima wears many professional hats, but their functions are the same, he says. His roles as president of Tokyo University of Science, director of the university’s Photocatalysis International Research Center, and popularizer of science, he contends, are all about acquiring and communicating scientific knowledge and using it to solve practical problems. When I visited him in March, Fujishima had just returned from meeting with a company interested in commercializing an ozone-generating method he had developed to kill bacteria.

A prolific scientist—SciFinder lists more than 1,600 journal articles and patents in his name—Fujishima is famous for his work on titanium dioxide, “a very nice material,” he says. Rutile crystals of the mineral, often used in jewelry, “are like diamonds,” he says. In fact, his breakthrough discovery in 1969—that in the presence of light, rutile TiO2 splits water into H2 and O2—came from studying crystals donated by a Japanese jeweler.

At the time, Fujishima was a Ph.D. student at the University of Tokyo working with Kenichi Honda. His finding had implications for artificial photosynthesis, which involves water splitting, and generating H2 as an alternative fuel.

Before his discovery, he explains, scientists knew that water could split under an applied electrical potential. “But I applied light,” he says. Electrochemists were incredulous. “No one believed the results,” he recalls. “People attacked me.” Initial publication in Japanese journals was slow, because it took time for Fujishima to satisfy skeptical reviewers. The rest of the world learned about his work when his third paper was published, in 1972, in Nature (DOI: 10.1038/238037a0).

Then in 1973, the Organization of the Petroleum Exporting Countries rattled the world with an oil embargo. Gasoline prices rose 900%. “That gave great importance to the Nature paper,” he says, because it offered a way to generate an alternative fuel from an abundant resource. Even the Japanese newspaper the Asahi Shimbun took notice and ran a story on Fujishima’s water-splitting research on Jan. 1, 1974. “It was the only time in the newspaper’s history that a science story had made it on the front page,” Fujishima says.

Fast-forward to New Year’s Day 2015, and the Asahi Shimbun again featured Fujishima’s work, this time covering the myriad commercial applications of TiO2 due to its unique properties.

Shortly after the Nature paper, Fujishima realized that practical H2 production would be difficult with his catalytic system. Single rutile crystals of TiO2 were hard to get, and even when they were available, yields were low. So Fujishima switched to TiO2 powder, which is also photocatalytic but cheap.

When TiO2 powder is illuminated, Fujishima found, the material becomes so strongly oxidative that it can degrade bacteria and cancer cells. Then he discovered that films of TiO2 are superhydrophilic in the presence of light: Water sticks to them tightly. These two properties opened the door to applications in disinfection and cleaning.

For instance, TiO2-coated surfaces eliminate odors from toilets and sewers and deliver bacteria-free air to buildings. The material has also led to nonfogging mirrors, because water spreads evenly on a TiO2-coated surface, instead of forming discrete droplets, which form the haze. Together, TiO2’s oxidative power and superhydrophilicity have given rise to self-cleaning surfaces found in football stadiums and high-speed trains.

Now 73, Fujishima is busier than ever. Not only is he the president of a 134-year-old university, but he remains active in research. He is extending TiO2 photocatalysis to other problems, such as producing bigger hydroponic strawberries by destroying growth-inhibiting substances exuded from the plants’ roots.Other projects do not involve TiO2, such as using conductive diamonds to convert water to ozone, a well-known bacteria killer.

And he has added popularizing science to his portfolio. In 2010, a children’s book he and others wrote about the wonders of TiO2—“Clean and Green: A Story of the Sun and Photocatalysts”—was published. The English translation came out in 2011.

He welcomes opportunities to speak to young people, even kindergartners. “It is difficult to attract youth to science; that’s why I go out,” Fujishima says. “Japan has no resources, only human power. It has to encourage mothers and fathers to encourage children to go to science.”

He says he’s able to balance his various roles by concentrating on one thing at a time. Pointing to a 30-minute sand clock on his desk, he jokes that he allots only 30 minutes to each task.

Before I leave, Fujishima regales me with his balancing skills. With childlike glee, he shows me how to set a coin on the long edge of a paper bill that’s stretched between his hands. He urges me to try and laughs heartily at my success.

Periodic Table
From our archives: An essay on gallium, by Oliver Sacks
Food Science
Limoncello observations and more thesis treats
Water
Sunlight plus viruses deal a quicker death to antibiotic-resistant bacteria
Share X
To send an e-mail to multiple recipients, separate e-mail addresses with a comma, semicolon, or both.
Title: C&EN Talks With Photocatalysis Pioneer Akira Fujishima
Author: A. Maureen Rouhi
Chemical & Engineering News will not share your email address with any other person or company.