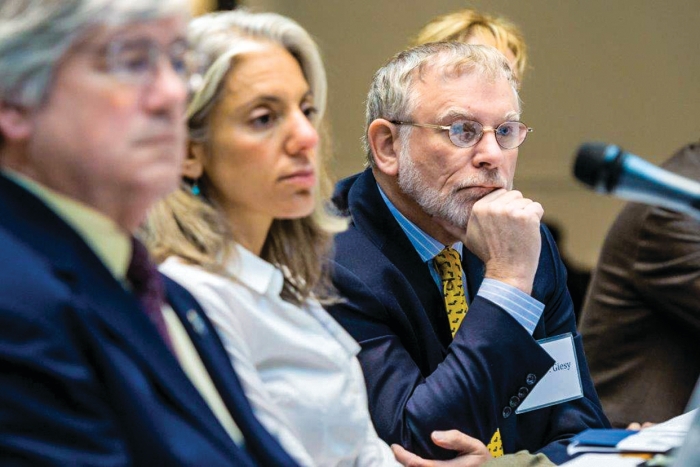 Congress is moving closer to changing how the Environmental Protection Agency gets the scientific advice that EPA uses in its decisions to regulate commercial chemicals and pollution. The House of Representatives has passed and a Senate committee is now considering legislation that would boost industry’s voice in the scientific advice EPA gets.

The measures, S. 543 in the Senate and H.R. 1029 in the House, would alter EPA’s external Science Advisory Board (SAB). They would require SAB to respond to all input provided by regulated industry and members of the public. In addition, they would change the makeup of the board, in part by making it harder for academics who get EPA research grants to serve as science advisers to the agency.

The American Chemistry Council (ACC) and the U.S. Chamber of Commerce, among other industry groups, are supporting the legislation. Republican backers such as Sen. Mike Rounds (R-S.D.) claim the changes would increase EPA accountability by requiring SAB panels to formally respond to stakeholder comments. But Democrats, environmental groups, and 42 universities and scientific organizations—including the American Chemical Society, the publisher of C&EN—assert that the bill would tie up the board with procedural requirements.

“The Board may find itself repeatedly reexamining the ‘state of the science’ ” on any given environmental topic, according to a recent letter to Congress about the legislation from the Union of Concerned Scientists. SAB panels would be required to respond to every comment offered from industry and the public and to continue holding public meetings until stakeholders stopped commenting, the advocacy group argues. Such a process would delay transmission of SAB’s advice to EPA. In turn, this could stall agency decisions on whether or to what extent the agency regulates air or water pollution, waste, or the use of commercial chemicals.

ACC says current SAB deliberations are sometimes insufficient. As an example, the chemical industry group cites SAB’s review of EPA’s draft hazard assessment of trimethylbenzenes. EPA’s draft assessment, ACC contends, does not take into consideration that the three trimethylbenzene isomers commonly occur in the environment as mixtures with other hydrocarbons that contain nine carbons. ACC wants EPA to expand its assessment to include all nine-carbon aromatics because the toxicological properties of these substances are similar to those of the trimethylbenzenes. “Despite bringing this to the SAB’s attention at multiple points in the process, not one panel member ever asked about it,” ACC says.

SAB Staff Director Chris Zarba says that SAB’s draft report on trimethylbenzenes “frames the appropriate scientific use of mixtures in considering the toxicology of the individual isomers.”

In addition to requiring SAB response to public comments, the House and Senate bills would change the makeup of the board.

First, the legislation would change conflict-of-interest rules. It would make clear that scientists with financial ties to regulated industry are allowed to be SAB members. It would, however, bar scientists from serving if they’ve received an EPA grant within the prior three years and would prevent them from obtaining an EPA grant during their tenure and for three years afterward.

Second, the bills would require EPA to ignore scientific qualifications in recruiting SAB panelists from state, local, or tribal governments. They mandate that 10% of SAB panels be drawn from these organizations.

In a recently issued veto threat, the White House counters that the bills “would negatively affect the appointment of experts and would weaken the scientific independence and integrity of the SAB.”

The quota for state, local, and tribal governments means SAB would have to expand its panels by 10% to get the required science and technical expertise to provide appropriate advice to EPA, says Terry F. Yosie, former SAB director. Yosie, who is now with the World Environment Center, an international sustainable development group, calls the legislation a “waste of taxpayers’ money.”

A study of SAB operations to identify possible improvements would have been useful to lawmakers before they wrote the bills, says an EPA official who spoke to C&EN under the condition of not being named.

The House passed H.R. 1029 in March on a vote of 236-181. A vote on S. 543 by the Senate Environment & Public Works Committee is planned for this summer, and the bill could come before the full Senate soon after.