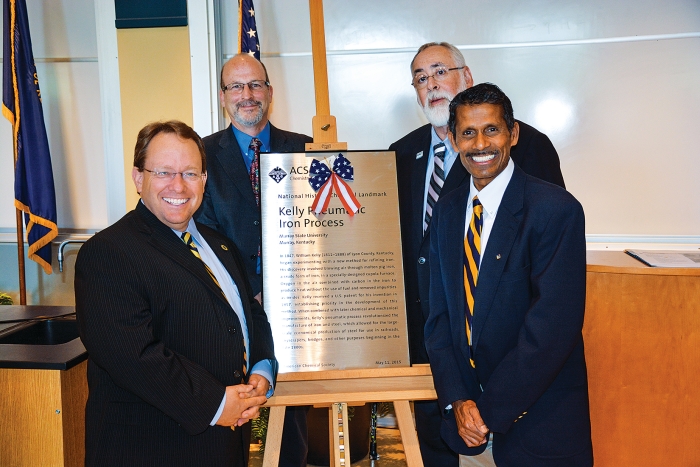 The expansion of railroads and manufacturing during the late-19th century sparked strong demand for materials such as iron. However, early processes for refining crude iron ore were labor- and fuel-intensive, making large-scale production impractical.

To address this issue, American metallurgist and ironworks owner William Kelly developed a process for refining iron that was a key stepping-stone to cost-effective manufacture of large quantities of iron products, including steel, which is an alloy of iron and carbon.

The American Chemical Society recently honored this work by designating the process as a National Historic Chemical Landmark. After two May 11 ceremonies, plaques marking the designation were installed at the Lyon County Public Library in Eddyville, Ky., near the location where Kelly conducted his research, and at Murray State University (MSU) in Murray, Ky., in an effort to educate area students about Kelly’s legacy. 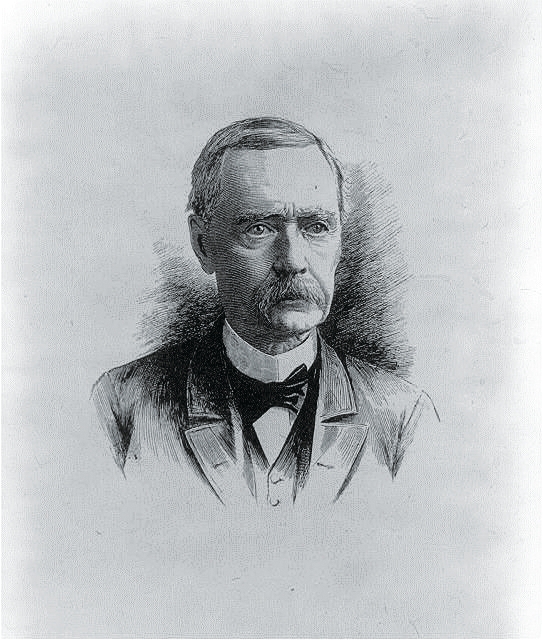 “By today’s National Historic Chemical Landmark designation, the American Chemical Society shines a light on William Kelly’s contributions to the worldwide steelmaking industry and also the role of chemistry in supplying the materials that shape our world,” said George M. Bodner, ACS District II director, who spoke at both ceremonies.

At the Eddyville ceremony, Bodner presented a commemorative plaque to Sally Whittington, president of the Lyon County Historical Society; Wade White, judge executive of Lyon County; and Romona Engler, director of the Lyon County Public Library. At the MSU event, he presented a plaque to Robert O. Davies, president of the university; Stephen Cobb, dean of MSU’s Jesse D. Jones College of Science, Engineering & Technology; Harry B. Fannin, chair of the chemistry department; and Bommanna Loganathan, an MSU chemistry professor and immediate past chair of the ACS Kentucky Lake Section, who nominated Kelly’s process for the ACS landmarks program.

Kelly’s work began in 1847 when he recognized that shortages of fuel—trees from local forests—were becoming a threat to the success of his ironworks. He began experimenting to develop a more efficient, less fuel-intensive method for refining iron at his facilities near Eddyville.

In his research, Kelly constructed a specially designed cupola furnace. Molten pig iron—a crude form of iron—was poured into the cupola, which contained perforations at the bottom. When air was forced through the perforations into the molten iron, various chemical reactions occurred. Oxygen in the air combined with impurities in the iron to produce carbon dioxide and other compounds that vented out of the top of the furnace as gases. Enough heat was created by these reactions to keep the mixture molten without the use of fuel.

“This method, which Kelly named the ‘air-boiling process’ but which we know today as ‘Kelly’s pneumatic process,’ has everything to do with chemistry,” Bodner said.

Although both Kelly and Bessemer had each developed a pneumatic process for refining iron, neither yet knew how to regulate the carbon content of their products. In addition, they had not demonstrated the ability to apply the process in a factory setting.

However, chemical and mechanical improvements eventually combined with the pneumatic process to revolutionize the manufacture of iron and steel. This enabled the large-scale economical production of steel for use in railroads, skyscrapers, bridges, and other purposes beginning in the late 1800s.

The Kelly process remained important to commercial steelmaking for nearly a century, until new methods were developed.

Across the U.S., the National Historic Chemical Landmarks program has awarded landmark status to more than 75 places, discoveries, and achievements in the history of chemical science and technology.

ACS launched the chemical landmarks program in 1992 to enhance public appreciation for the contributions of the chemical sciences to modern life in the U.S. and to encourage a sense of pride in the practitioners of those sciences.

Prospective landmarks can be nominated by ACS local sections, divisions, or committees. The landmarks committee reviews nominees, and the ACS Board Committee on Public Affairs & Public Relations approves them.