EXTRAORDINARY ELEMENT
Credit: Periodic Videos
To learn more about the history and science of plutonium, check out this video with footage from the U.K. National Nuclear Laboratory filmed by Periodic Videos.

When the U.S. Department of Energy built the $3.5 billion National Ignition Facility (NIF) at Lawrence Livermore National Laboratory (LLNL), its major selling point to the public was to explore nuclear fusion reactions as a possible new energy source. The less-heralded reason was to perform experiments to inform another area: nuclear weapons research.

The U.S. stopped nuclear weapons testing in 1992. Since then, personnel charged with ensuring the safety and reliability of the U.S. stockpile have relied on old testing data, continued experiments that fall short of actual weapons conditions, and computer modeling—all of which leave several knowledge gaps. NIF began to contribute to plutonium science this year, six years after the facility was completed.

“The focus of the experiments that we’re doing at NIF is to develop a better understanding of the material properties of plutonium in conditions that are relevant to nuclear weapons,” says Michael Dunning, principal deputy for weapons and complex integration at LLNL.

NIF houses an array of 192 high-powered lasers. For energy research, it fires those beams at hydrogen isotopes to trigger fusion by compressing the fuel. This year, NIF started to aim its lasers at plutonium samples to simulate the high-pressure, high-temperature conditions of a nuclear explosion. The facility has completed two such “shots” already and will likely do one more this year.

The studies at NIF are necessary because plutonium has unique properties that can’t be predicted by comparisons with other elements. “It sits in a very special place in the actinide series,” says Thomas E. Albrecht-Schmitt, a chemistry professor at Florida State University. To the left of plutonium on the periodic table, the lighter actinides have delocalized f electrons that behave similarly to the 5d electrons of the transition metals. To the right, the heavier actinides have very localized electrons that are more akin to the chemically inert 4f electrons of the lanthanides. 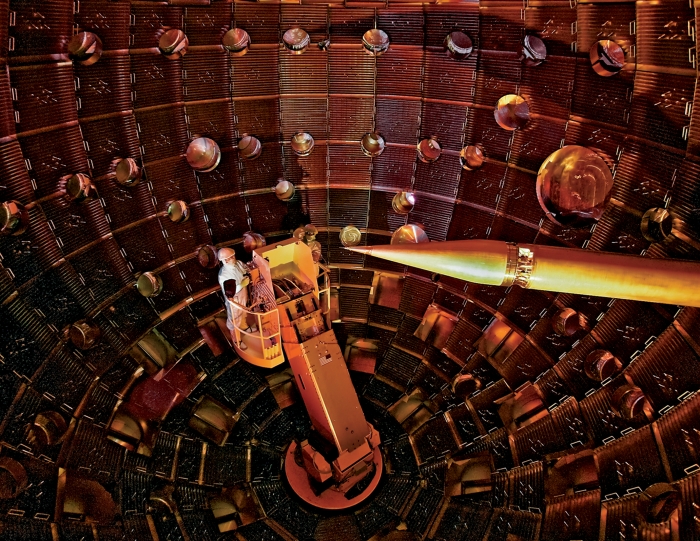 Credit: LLNL
In plutonium shots, 16 of NIF’s 192 lasers take aim at a sample about the size of a poppy seed, which would be mounted at the tip of the pencil-shaped target positioner.

Plutonium transitions between the two groups, with partially localized 5f electrons. Its 5f and 6d orbitals are very close in energy, and its 7s and 7p orbitals are also nearby. All of these orbitals may participate in bonding. Because of plutonium’s unique atomic structure, minor changes in temperature and pressure can cause significant changes in the element’s physical properties.

For example, the solid undergoes six phase transitions before melting. Those transitions are also accompanied by large volume changes. “There is nothing else as complex as plutonium,” Albrecht-Schmitt says. The details of what happens to plutonium as temperature and pressure increase in a nuclear detonation are key to understanding how a weapon will perform. 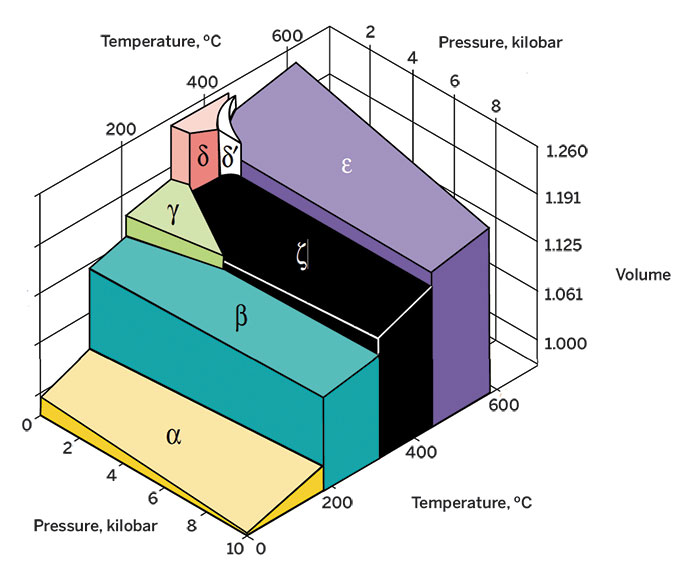 Credit: LANL
A diagram for pure plutonium’s six phases, designated by Greek letters, shows that increasing temperature increases metal-metal bond lengths and expands the volume of the unit cell (Los Alamos Sci.2000,26 (II), 312). Increasing pressure can have the opposite effect.

JASPER uses a two-stage gas gun, which compresses a gas that is then used to send a projectile into a target about the size of a dime. Researchers measure how quickly the ensuing shock wave passes through the material being analyzed to help relate properties such as temperature, pressure, volume, density, and internal energy. JASPER can induce pressures of 0.25 to 5.3 megabars in tantalum targets, Dunning says; standard atmospheric sea-level pressure is 1 bar.

Z machine also compresses and shocks material but in a different way that allows it to induce pressures of more than 10 Mbar. It releases stored energy from capacitors in a 0.1- to 1.0-microsecond pulse of 15 to 25 mega-amps of current. The pulse creates a magnetic field that can compress a sample without shocking it, providing higher pressure at lower temperatures than a comparable shock experiment. Alternatively, the generated magnetic field can produce high pressures by driving a plate into a sample. At both JASPER and Z, scientists can test samples derived from plutonium pits that have been extracted from weapons, says Dawn Flicker, who manages high energy density material science experiments at Sandia National Laboratories.

The U1a facility, in contrast, is an underground testing site that can more closely mimic an actual nuclear weapon setup by using explosives to generate high pressures. The experiments, however, must stop short of achieving a sustained nuclear chain reaction.

At NIF, the laser shots will allow researchers to take the plutonium experiments to more extreme conditions in a controlled way, LLNL’s Dunning says. NIF experiments could provide information on plutonium that is hard to get from pre-1992 weapons testing data, he notes. Aside from the fact that the weapons tests involved decades-old diagnostic technology, “you’ve got the entire weapon going off,” Dunning says. “The plutonium is on the inside, and you’ve got all these other materials in between any diagnostic you have and the plutonium. It’s hard to understand cause and effect in an experiment that has so many things going on.” 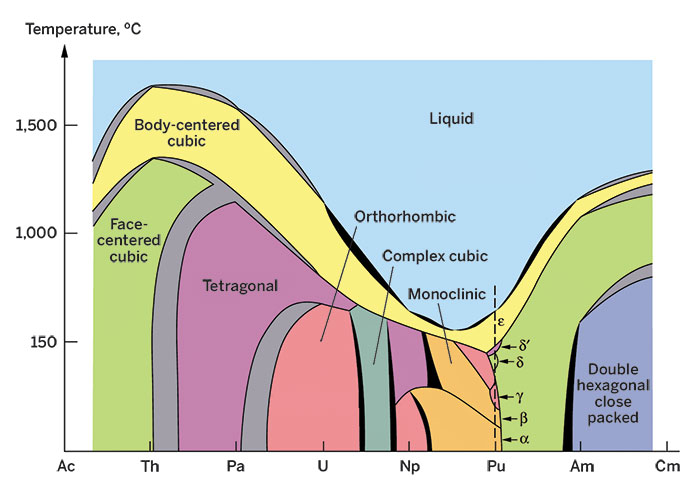 Credit: LANL
In this phase diagram, the response of plutonium to changing temperature at ambient pressure is compared with other actinides (Los Alamos Sci.2000,26 (II), 302). Moving from left to right between marks for individual elements indicates the behavior of proportional mixtures of the two. Mixtures of two phases are in black; uncertain regions are in gray.

NIF experiments currently involve a plutonium target that’s about the size of a thin poppy seed—a wafer 2 mm in diameter and 8 µm thick. It weighs about 0.5 mg. The two experiments done at NIF so far used 242Pu, which is less radioactive than weapons-grade 239Pu. The plutonium wafer is sandwiched between disks of aluminum and diamond. The safety measures that NIF staff take to handle plutonium are similar to those for other materials that have health and safety concerns, Dunning says.

In an NIF experiment, scientists aim 16 lasers at the top of the sandwich. As the outermost layer ablates, the plutonium compresses. Meanwhile, 24 other lasers are used to generate X-rays that penetrate the plutonium. The resulting diffraction pattern yields information on the plutonium phase structure.

Debris thrown off from sample pellets during shots can also help with nuclear forensics, notes Albrecht-Schmitt. Debris data from NIF could help scientists analyze material from the field if someone detonated a nuclear device, providing a means to determine where the material came from, how old it was, and what kind of device it was in.

NIF’s first experiments were designed to map out the plutonium phase diagram as a function of pressure, Dunning says. As for what the researchers specifically found, that information is classified. Going forward, researchers are developing experiments to explore plutonium’s Hugoniot curve, which describes the relationship between the material’s states on either side of a shock wave. They are also interested in understanding the strength of plutonium as a function of pressure.

NIF anticipates doing plutonium shots every two to three months in the near future. “We want to understand the previous experiment before we move on,” Dunning says. Shots may become more frequent as the program moves forward.

How long the program will last is an open question and will depend on what NIF experiments turn up. “If our theories are right, then we’re just doing a few experiments to validate and move on,” Dunning says. “But that’s unlikely.”