Plasticizer Makers Want A Piece Of The Phthalates Pie 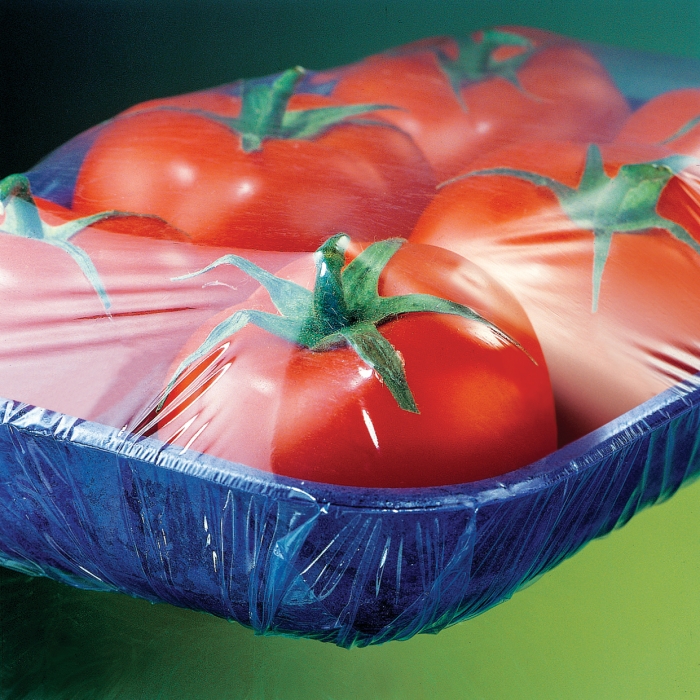 In the late 1920s, Waldo Semon presided over a marriage that would remain strong through the rest of the century. The B.F. Goodrich chemist mixed a hitherto unexploited polymer, polyvinyl chloride, with solvents, including dibutyl phthalate. An era of phthalate ester-plasticized PVC was born, and with it came vinyl jacketing for wires, plastic shower curtains, dashboards that emit new-car smell, and other consumer staples.

The marriage isn’t as secure as it used to be. Environmental and health concerns have inspired regulations against phthalates in certain applications, especially ones where children are exposed. Moreover, many brand owners, fearing repercussions from selling products thought harmful, are shunning phthalates.

Some chemical companies, among them firms that make phthalates, smell an opportunity. They are marketing phthalate replacements, and the materials are gaining traction.

Plasticizers are chemicals, normally esters, that have a high degree of miscibility with PVC, explains Alan Barcon, market development manager for PolyOne, a PVC compounder and plasticizer supplier. “Essentially, when you are plasticizing PVC, you are creating a solid solution,” he says.

Phthalates, made by reacting phthalic anhydride with alcohols, dominate plasticizers. They are cheap, versatile, and have been around for generations. According to Michael P. Malveda, director of specialty chemicals at the market research firm IHS Chemical, they made up 70% of the more than 8 million metric tons of plasticizers sold worldwide last year.

A score of phthalates are available, but two are far and away the most important: di(2-ethylhexyl) phthalate (DEHP)—known in the chemical industry as dioctyl phthalate—and diisononyl phthalate (DINP).

DEHP has been the industry workhorse since it was introduced in the 1940s. Suited to most flexible-vinyl applications, it is the benchmark for measuring the performance of other plasticizers. It is also the largest-volume plasticizer globally, alone capturing 37% of the market, according to IHS Chemical.

Because of its possible effects on reproduction and development, DEHP is also among the most controversial and heavily regulated of the phthalate esters. It has been prohibited in children’s products in the U.S. and Europe for about a decade. Earlier this year, the European Union effectively banned DEHP in all but approved uses.

In the U.S. and Europe, the market for DEHP has been winnowed down to medical applications, such as intravenous bags and medical tubing, says Steve Cullen, plasticizers business director at Eastman Chemical, which still makes DEHP. Tubes made with DEHP don’t kink easily.

China, where many of the world’s household vinyl products are made, still uses plenty of DEHP. “Because China is such a big share of the total global market, you see that DEHP is the largest plasticizer used globally,” IHS Chemical’s Malveda says. However, he notes that regulation of the chemical, especially in Europe, might force China to change, too.

DINP is the number two phthalate, representing about 16% of plasticizer demand, according to IHS Chemical. It’s been commercially available for about 50 years, says Elissa P. Sterry, vice president of ExxonMobil Chemical’s intermediates business.

DINP is a general-purpose plasticizer that, according to Sterry, offers a key advantage over DEHP: It has a higher molecular weight, making it less likely to migrate out of plastic. Thus, DINP is suited for long-lived goods such as wire and cable. “What consumers are looking for when they buy a durable good is that the product performance holds up under a variety of environmental circumstances over a long period of time,” she says.

In recent years, DINP has found increasing use as a replacement for DEHP as that chemical has come under regulatory fire. Even though DINP is itself a phthalate, Sterry points out that it has a less hazardous toxicological profile than DEHP and is subject to fewer regulatory restrictions.

ALL QUACKED UP
[+]Enlarge
Credit: Eastman
Eastman 168 has emerged as a leading alternative in the general plasticizer world. 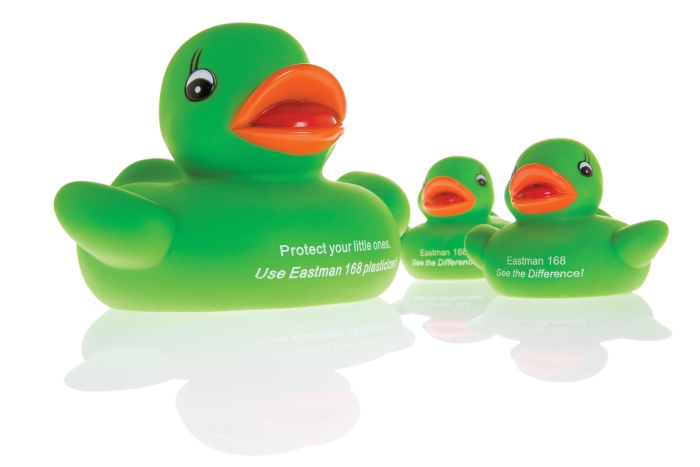 Credit: Eastman
Eastman 168 has emerged as a leading alternative in the general plasticizer world.

DINP, however, isn’t regulation-free. In Europe, it is banned in toys that can be placed in children’s mouths. It faces similar, though temporary, limits in the U.S. as well. California listed DINP as a known carcinogen in 2013.

Some brand owners aren’t waiting for regulators to act on phthalates. Whether to get ahead of regulations they think might come eventually, reduce the risk of liability, or appease nervous consumers, a few have announced they are getting rid of phthalates in their products.

Apple eliminated them from cables, such as those used for earbuds and power cords, in 2013. Home Depot and Lowe’s recently announced they will get rid of phthalates in vinyl flooring by the end of this year.

Such moves are understandable to Eastman’s Cullen. “If there are question marks around a material you are using, people will want to stay away from it if there is an alternative available,” he says.

Because of this pressure, phthalates have been losing ground to alternatives. IHS Chemical expects global phthalate demand to grow by about 2% per year, whereas nonphthalate plasticizers will post 7% growth. As recently as 2012, according to IHS, phthalates represented 78% of plasticizer demand. “There’s definitely been a continuing trend away from phthalates,” IHS Chemical’s Malveda says.

The shift is a jump ball that a number of specialty chemical makers would like to pull down. In addition to making DEHP, Eastman makes one of its major nonphthalate alternatives: dioctyl terephthalate (DOTP), also known as di(2-ethylhexyl) terephthalate (DEHT). DOTP, which Eastman has sold as Eastman 168 for 40 years, is the diester of 2-ethylhexanol and terephthalic acid.

DOTP can be a drop-in replacement for DEHP and DINP, Cullen says, but not always. “People want to sell exactly the same product, that looks the same, performs the same, and feels the same,” he says. “They just don’t want to have phthalate plasticizers in it. They want alternative ones. Sometimes you have a little bit of tweaking in the formulation to get it to do that.” 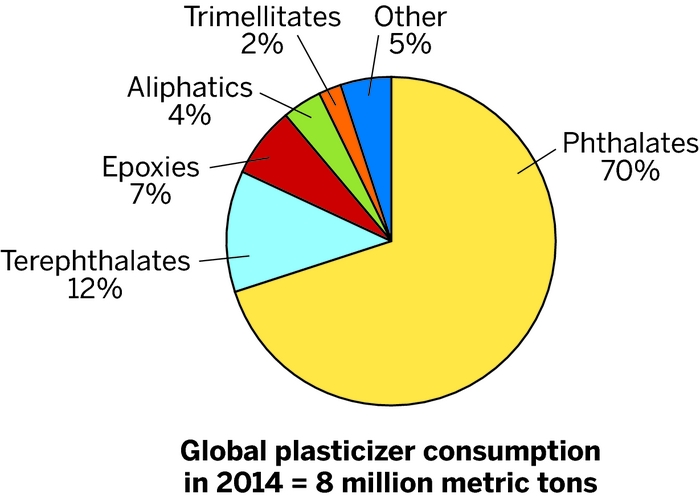 Investment in nonphthalate plasticizers has been a strategic imperative for Eastman. “Going back to the early 2000s, Eastman identified that there was pressure on the phthalate-based plasticizers. And having a unique portfolio at that point, we saw a market opportunity,” Cullen says.

The company bought Sterling Chemicals in 2011. It converted Sterling’s plant in Texas City, Texas, which had been making phthalates for BASF, into one to make Eastman 168, thereby expanding its capacity for the product by 60%.

Around the same time, it bought Genovique Specialties, a maker of benzoate ester plasticizers, which can replace specialized phthalates such as di-n-butyl phthalate (DBP) and butylbenzyl phthalate (BBP). One of the major applications for BBP is in vinyl flooring.

BASF, which makes phthalates including DINP, is also a major player in substitutes with its diisononyl cyclohexane-1,2-dicarboxylate, which it calls Hexamoll DINCH. With it, BASF has been pursuing markets such as toys, medical devices, and floor coverings.

Since the product was introduced in 2002, BASF says, its sales volumes have been growing at a double-digit clip. The company quadrupled capacity for the product in 2006 and doubled it in 2014, to reach 200,000 metric tons per year. With Sinopec, BASF is building China’s first plant for isononanol, a precursor for DINCH and DINP.

Citrate esters are sold at a premium compared with DEHP and DINP, Szabo says, but their performance more than makes up for it. He says a compounder only needs to use half the amount of citrates to achieve the level of softness offered by phthalates. “We’ve successfully reformulated quite a few applications over the last few years,” he says.

This year, PolyOne, which traces its roots back to Semon’s lab at B.F. Goodrich, launched one of the newest phthalate replacements. The firm’s Geon BIO PVC compounds contain its reFlex plasticizers, which are epoxidized fatty acid monoesters derived from soybean oil.

PolyOne’s reFlex platform is based on technology licensed from Battelle Memorial Institute in 2008. It has been working with Archer Daniels Midland on developing commercial candidates from the class of molecules Battelle identified as well as on commercial-scale manufacturing.

So far, the reFlex line has two products. One, reFlex 300, is a replacement for DEHP and DINP. The other, reFlex 100, is designed to replace BBP, specifically in flooring, a market that has opened up largely because of Home Depot’s phaseout. The products, PolyOne’s Barcon asserts, perform every bit as well as the phthalates they replace. “At this point,” he says, “we haven’t seen any trade-offs.”

If new plasticizers can in fact be traded for phthalates without a performance penalty, then plastics formulators might not bother with phthalates anymore. And with about 6 million metric tons of phthalates still being made every year, the trade-in opportunity is massive.

Vertellus’s Szabo thinks so. “We’re probably just scratching the surface of this transition,” he says.

Recycling
BASF advances chemical polyurethane recycling
Business
Walmart identifies high-priority chemicals
Business
Polyurethane makers prepare for a phase out
Share X
To send an e-mail to multiple recipients, separate e-mail addresses with a comma, semicolon, or both.
Title: Plasticizer Makers Want A Piece Of The Phthalates Pie
Author: Alexander H. Tullo
Chemical & Engineering News will not share your email address with any other person or company.