For newly minted graduates in chemically related fields, the job market in 2014 was a bit more welcoming than in prior years, with unemployment down and salaries up, according to an American Chemical Society survey. 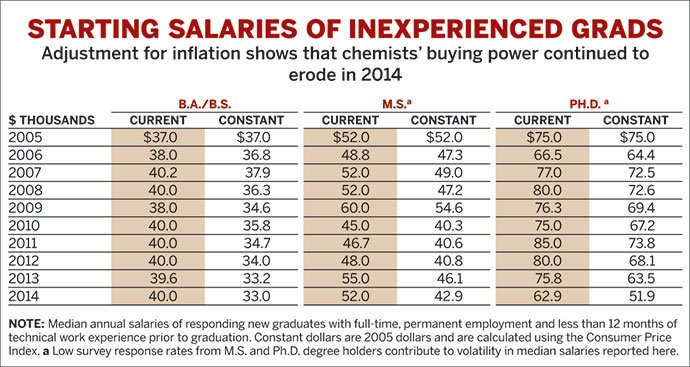 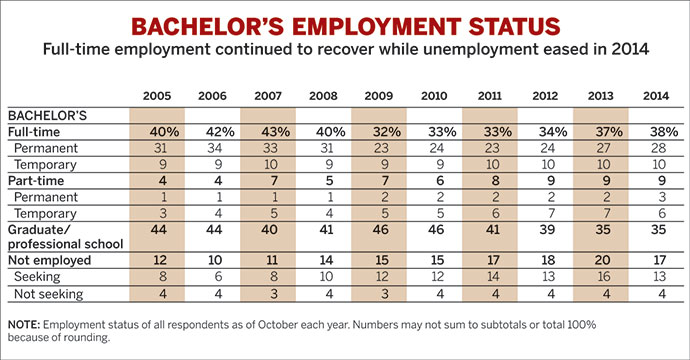 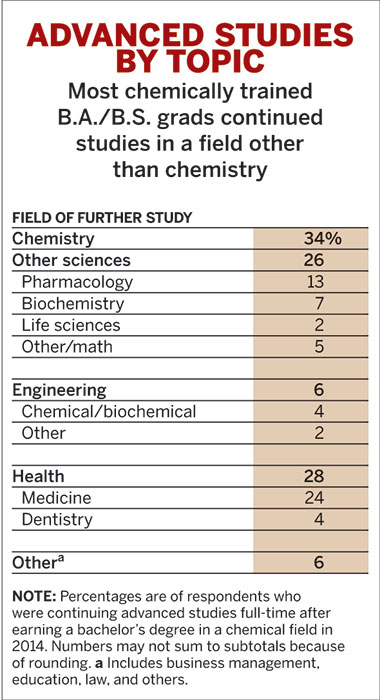 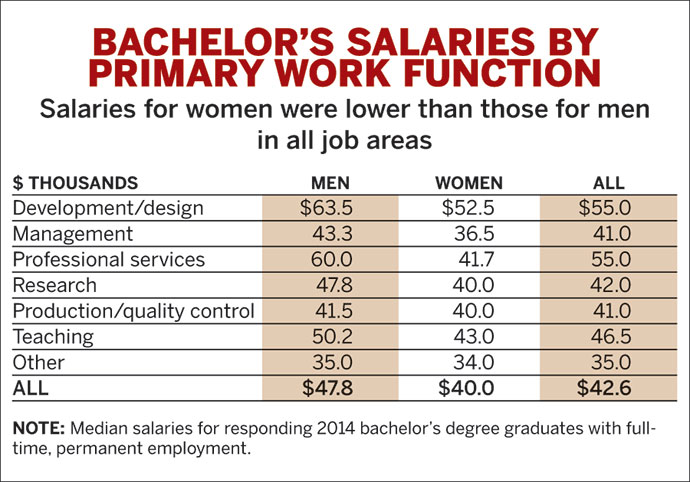 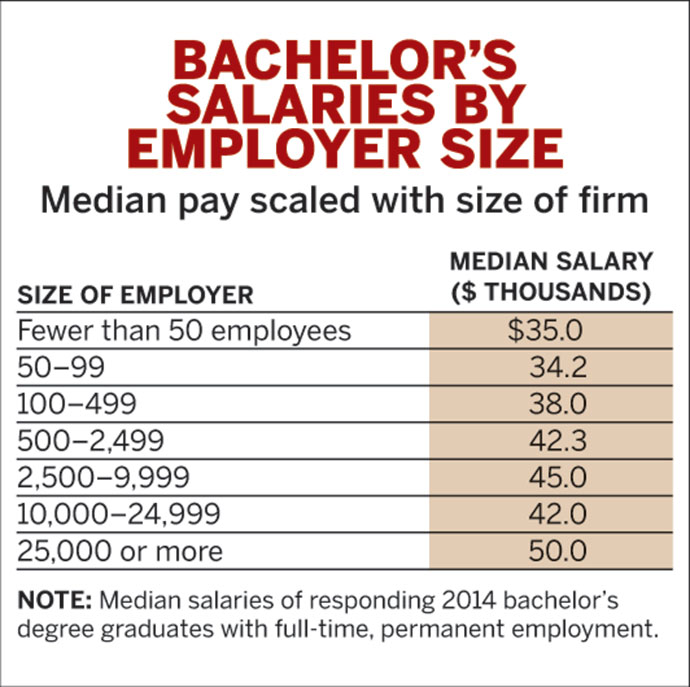 Meanwhile, median salaries for full-time, permanent jobs for inexperienced grads increased 1.0% between 2013 and 2014, though the gain wasn’t spread evenly among the different degree levels.

These are some of the key findings of ACS’s survey of individuals who graduated during the 2013–14 academic year with degrees in chemistry and related fields.

The survey, which was sent to 12,771 recent graduates in October and November 2014, is conducted annually by Gareth S. Edwards of the ACS Department of Research & Market Insights under the guidance of the ACS Committee on Economic & Professional Affairs. A total of 2,089 usable responses were received, for an overall response rate of 16.4%.

Some respondents didn’t answer all of the survey questions, so data in different tables may not match.

The respondents can be divided into several categories—by degree or experience level, for instance, or field of study, gender, or type of employment. For some of these groups, the number of responses was small and not necessarily representative of the wider pool of chemistry graduates in a given group. As a result, most of this article concentrates on grads with a bachelor’s degree, who account for the vast majority of those surveyed. Those with a bachelor’s degree were responsible for 87.6% of responses, compared with 4.8% from those with a master’s and 7.6% from Ph.D.s.

The most popular field of study for bachelor’s degree recipients was general chemistry, with just over half of B.A. and B.S. degrees awarded in this field, the survey showed. Nearly one-third of the degrees were in biochemistry, and nearly one-tenth were awarded in chemical engineering.

One-third of the graduates with a bachelor’s degree who planned to take up advanced studies intended to stick with chemistry as their subject of choice. Nearly one-quarter opted instead for medicine. Pharmacy and pharmacology drew 12.7%, and 6.5% planned to study biochemistry.

Of the graduates who landed a job in 2014, most headed to industry and nonmanufacturing roles, with 56.8% of bachelor’s degree graduates going into these sectors. Academia attracted another 34.2% of these grads. Just 6.9% went into government jobs, and 2.0% were self-employed.

For those working in industry and government, the median starting salary for inexperienced graduates with a bachelor’s degree stood at $40,000 in 2014, unchanged from 2013. This category of workers encompasses employees with less than 12 months of work experience prior to graduation. Inexperienced bachelor’s recipients working in academia fared less well than their peers: Their median starting salary was $36,100 in 2014, though that was an improvement over the 2013 median salary of $34,000.

Salaries varied even more widely when broken down by the size of a graduate’s employer. For those with a bachelor’s degree working at an employer with fewer than 499 staffers, the median salary ranged from $34,200 to $38,000 in 2014, depending on employer size. Median salaries ranged from $42,000 to $45,000 for those working at employers with 500 to 24,999 staffers. At organizations with 25,000 or more employees, the median salary for bachelor’s recipients was $50,000. These figures include respondents with all levels of experience. 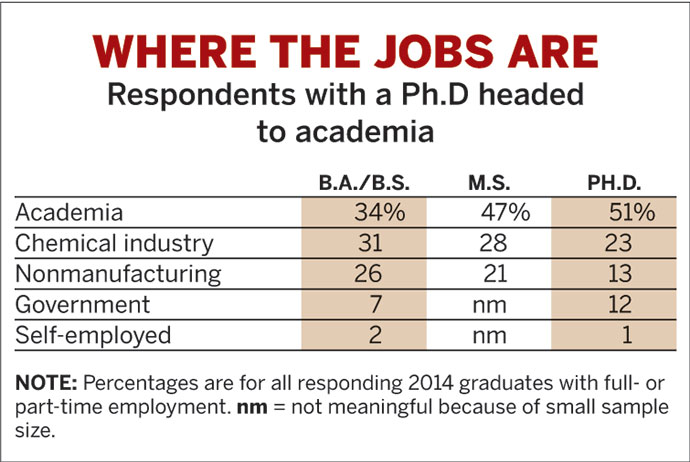 So what’s the best way to land a job? Among inexperienced graduates with a B.A. or B.S., some 32.3% reported that they had success using electronic methods. The next most effective methods were informal channels (19.8%), placement services (17.6%), and employment agencies (8.9%).

Those numbers change considerably when the question is opened to graduates with all levels of experience. Those with a B.A. or B.S. still had the best results via electronic methods, though the category’s share dropped to 26.1%. Some 20.0% reported that faculty advisers were the most effective for helping them find a job, followed by informal channels (17.1%), placement services (8.9%), and former jobs (8.2%).

The ACS survey also asked graduates to evaluate their jobs. Among respondents with a bachelor’s degree, 46.4% strongly agreed with the statement that their jobs were related to their fields; that figure rose to 66.4% among those with a Ph.D.

To download a pdf of this article and tables, visit http://cenm.ag/2014gradsalary.

Check out ACS’s full report on the starting salary survey results at www.acs.org/2014newgradreport.

Salaries
Reactions
Salaries
Reactions
Salaries
What US chemists make, according to the 2019 ACS salary survey
Share X
To send an e-mail to multiple recipients, separate e-mail addresses with a comma, semicolon, or both.
Title: New-Grad Salaries & Employment
Author: Sophie L. Rovner
Chemical & Engineering News will not share your email address with any other person or company.

Comments
Andre Rosowsky, Ph.D., 76 Lindbergh Avenue, Needham, MA (July 1, 2015 5:04 PM)
Unless I missed it, your salary survey for inexperienced chemists in the Jun 29 issue didn't include a breakdown by gender, and thus it's tempting to speculate that the seeming decline in starting salary during 2014 may reflect, as an unintended consequence. an increase in the female/male ratio of new hires.
Reply »