Sewing Together Chemistry And Quilting 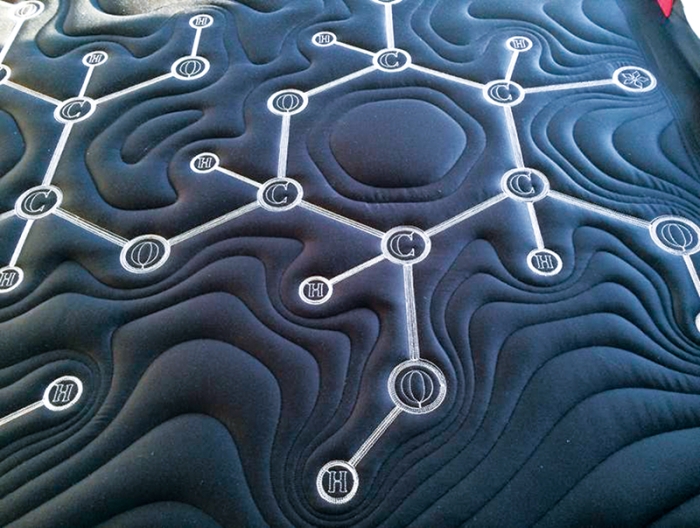 Credit: Theodore Gray
Molecular map: Cellulose was the perfect molecule to capture on a cotton-backed quilt.

Quilting might not be the most obvious interest for someone like computer scientist and author Theodore Gray. But it was Gray who encouraged his girlfriend, animator Nina Paley, to buy a huge quilting machine normally reserved for mass production of quilts in China. Then he took on the task of turning her computer animation files into instructions for the quilting machine.

It was probably inevitable that Gray’s personal obsession with the periodic table would meld with his work programming the quilting machine. Gray, who trained as a chemist, wrote “The Elements.” His book and related periodic table posters got a good reception, so he thought there must be a market for periodic table quilts as well.

“As a geeky Christmas present, it is hard to beat a periodic table quilt,” he says.

Making a periodic table quilt by hand can take a month or more, he says. But the massive machine can do it in a matter of hours, which brings the price into a more reasonable range: $299. “We can actually mass-produce these things,” he explains.

More recently, Gray completed work on a new book, “Molecules: The Elements and the Architecture of Everything.” And like his interest in the periodic table, his interest in molecules quickly extended into quilts.

Among the first molecules featured on his quilts was cellulose monomer, in keeping with the cotton fabric on the front and back of the quilt. Another paired a blue testosterone and pink estradiol, surrounded by swirling waves of stitches.

Gray says he could likely make quilts to order featuring your favorite molecule. He tells Newscripts he’d be able to make a quilt featuring almost any small molecule; most drugs would be the right size, for example.

“Somebody spent literally millions of dollars developing those molecules,” Gray says. “I’m sure there is a market there.”

Chemistry and quilting have also come together in Washington, D.C., where the National Academy of Sciences is featuring an exhibit of quilts representing the elements of the periodic table. 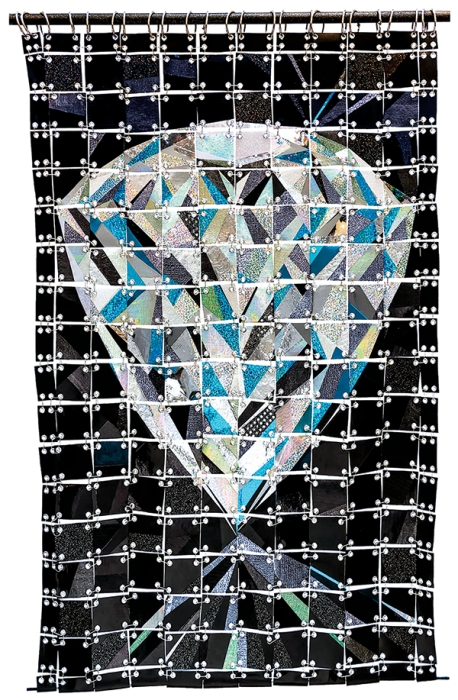 Studio Art Quilt Associates challenged quilters to represent their favorite element on a quilt for a show titled “Radical Elements.” Most of the quilters aren’t scientists, so many played off both personal experience and science, says B. J. Adams, one of the artists.

The artist who tackled technetium used pieces of bras donated by breast cancer patients to represent the element’s use as a medical tracer. Bismuth became a distinctive Pepto-Bismol-pink quilt that also depicted the element’s crystalline structure.

Adams describes herself as more of a painter and embroidery artist than quilter, but when she heard about the competition, she had to join. “All I could think of with cadmium was the colors,” she says; some of her favorite paints are named cadmium red and cadmium yellow.

The show’s participants were also challenged to find materials beyond traditional fabric and thread. Chlorine was depicted by maps of major chlorine gas accident sites overlaid with a sheer green fabric to show the gaseous element’s color. Another artist used almost all copper or copper-colored metals layered in squares for that element’s quilt.

This is the first quilt exhibit for the National Academies, says spokeswoman Alana Quinn. “Our whole program here explores the intersection of art and science, so this is the perfect venue for it.”

Science Communication
Book covers and Disney characters—there’s a periodic table for everything
Periodic Table
The 2019 #RealTimeElements Week Awards
Periodic Table
Element collecting: A niche hobby that connects people to chemistry
Share X
To send an e-mail to multiple recipients, separate e-mail addresses with a comma, semicolon, or both.
Title: Sewing Together Chemistry And Quilting
Author: Andrea Widener
Chemical & Engineering News will not share your email address with any other person or company.

Comments
Adrian Dingle (June 29, 2015 9:36 AM)
OK, but let's all be careful about the use of the elements/PT in pop-culture! For example; http://www.adriandingleschemistrypages.com/the-periodic-table-abuse-project/
Reply »

Thanks so much for selecting my work, CARBON, as an illustration in your article, SEWING TOGETHER CHEMESTRY AND QUILTS, for the Radicla Elements exhibition at the National Academy of Sciences! It took six months of arranging cut pieces of art papers, reflective papers, candy wrappers, aluminum foil, and more, to adhere with 2 layers of 2 inch square of duct tape, insert sneaker eyelets into each corner, and then wire them all together with jewelry wire. What I discovered once the pieces were attached to one another is that it moves like chain maile!

It is an honor to be in the exhibition and an honor to have CARBON as an illustration for your article!
Reply »