Making robots that are soft yet durable is a tough task. But engineers must attain that goal if they want to send inexpensive machines into environments such as disaster sites that may be inaccessible or dangerous to humans. Researchers at the Harvard University Microrobotics Laboratory have now made leaps toward that goal, with the help of three-dimensional printing. 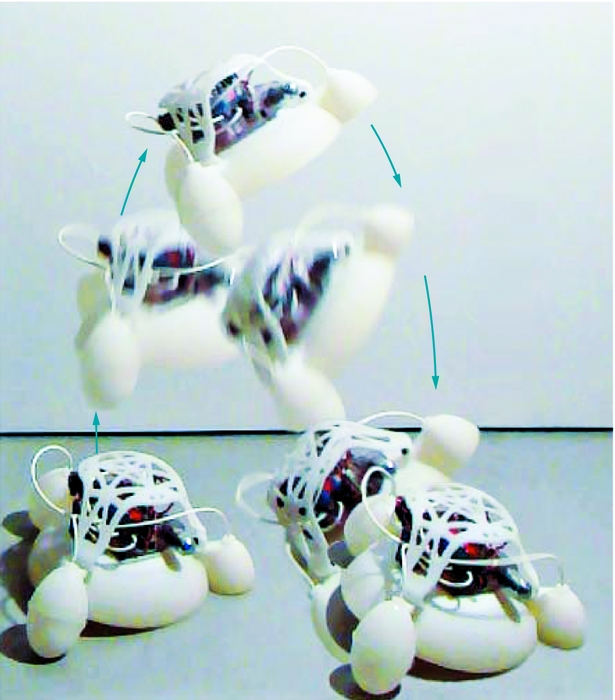 Credit: Science
Sequence shows the soft robot’s jumping ability. The robot is about 12 inches in diameter.

Led by Nicholas W. Bartlett and Michael T. Tolley, the Harvard team created robust, jumping robots using multiple materials with widely varying elastic properties (Science 2015, DOI: 10.1126/science.aab0129). To improve the robots’ ability to endure the stresses and strains of locomotion, the team used nine printable polymer resins to build robot bodies that feature a flexible base, a rigid cap, and materials that span the elasticity gap in between.

To push the robots to their stress and strain limits, the team decided to make them repeatedly launch into the air, Bartlett says. To do so, the roughly hemispherical robots spark a mixture of butane and oxygen in a small internal cavity and pop into the air as their flexible bases expand as a result of the small explosion. The robots can tilt themselves before the jump to guide their horizontal trajectories.

The rubberlike base absorbs the shock of the robots’ landings. Even though a robotic body made entirely of flexible material could work best for absorbing shock, support for the robots’ rigid components would be lacking, such for as gas cylinders, circuit boards, and power supplies, Bartlett points out.

To compare robot body materials, the team examined robots printed entirely with a rigid thermoplastic. Rigid robots jumped the highest of any examined—more than 1 meter high—but were the quickest to fail, the team reports. One shattered after just five trials. Robots with bodies printed with a range of mixed elastic and rigid materials hit a maximum jump height of 0.76 meters and could survive more than 100 jumps, Bartlett says.

Although the team applied its multimaterial strategy to jumping robots, “it could benefit pretty much any mobile, untethered soft robot,” Bartlett tells C&EN. His confidence is bolstered by how common this scheme is in nature. “Think about octopus beaks,” Bartlett says, which are hard and connected to squishy cephalopod bodies with tissues of middling elasticity. “Or even our own bodies, where tendons connect muscle to bone.”

Stark says the new robots are versatile but describes their current performance as modest. He believes they will improve rapidly now that the Harvard team has demonstrated that 3-D printing can be used to make them. With an increased focus on developing more soft materials, he says, chemists and chemical engineers will build even better robots.

One obstacle is the high cost of 3-D printers capable of putting down multiple materials, but Bartlett doesn’t foresee that standing in the way for long. “Three-dimensional printing is getting bigger by the day,” he says.