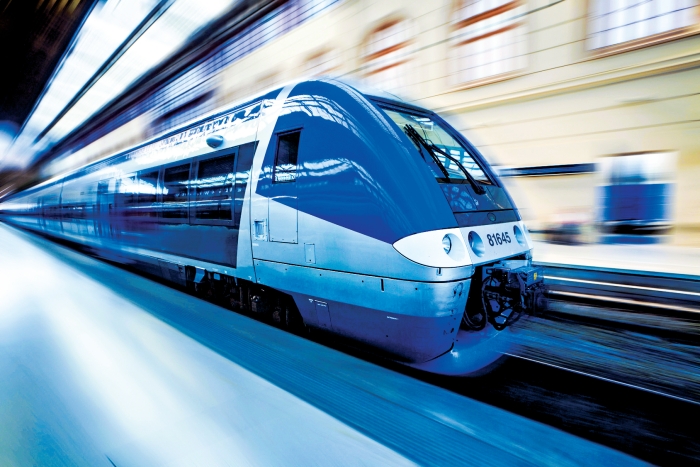 Love them or hate them, isocyanates are hard to beat. They make durable vehicle finishes that give new cars a shine that lasts for years. They also make industrial paints that are chemical resistant, flexible, and impervious to breakdown from the sun’s ultraviolet rays.

When reacted with polyester or acrylic resins, isocyanates cross-link to form a polyurethane. In coatings systems that also include pigments and other additives, polyurethanes are the industry benchmark for high performance. But isocyanates have a dark side too.

Reactive isocyanate oligomers are pulmonary and skin sensitizers until they fully cure, so they must be handled with care. Getting the most out of them often means that newly painted cars must cure in energy-hungry ovens. In addition, the oligomers are typically made with petro­chemical raw materials in a hazardous phosgenation process that can hardly be called green.

But coating materials suppliers are moving to put a kinder and gentler face on polyurethanes. Some, such as Bayer MaterialScience and Vencorex Chemicals, are beginning to develop isocyanates out of biosourced raw materials. Others, such as Evonik Industries, Dow Chemical, Nuplex Industries, and Hybrid Coating Technologies, have developed alternative coating technologies that promise performance equal to or better than isocyanate-based polyurethanes.

PPG, Schappert says, has developed a paint system that eliminates the need to put a new car body through a primer-curing oven. Thanks to resins that can be applied wet-on-wet, a car’s three top paint layers—primer, color coat, and clear topcoat—can be applied in succession and oven-cured.

Paint maker Axalta, which was DuPont’s coatings business until 2013, also has its eye on energy-saving technologies. Like PPG, it has designed paint packages for customers that use what Michael R. Koerner, an Axalta senior research fellow, calls a “three-wet system.” Advantages include a “smaller application footprint, reduced oven energy, and less environmental waste,” he says.

Credit: Axalta
Technicians get ready to paint a car in a spray booth.

Both paint makers say they are preparing for a future of lightweight, energy-saving vehicles assembled with nonferrous metal alloys, plastics, and fiber-reinforced substrates. Because high oven temperatures can adversely affect plastics, Koerner notes, oven cure temperatures will have to come down from about 140 °C to about 80 °C.

Materials that paint companies could be exploring to lower oven temperatures include new thermolatent isocyanate hardening catalysts from Bayer. They use what the firm calls Blulogiq technology.

Catalysts are rarely used on auto coating lines because they promote a reaction before the paint film has formed and leveled, says Jan Weikard, Bayer’s technology head for automotive applications. However, Blulogiq hardeners remain inactive until they are exposed to temperatures above 75 °C.

Then they spring into action, speeding the film-curing process. Using Blulogiq catalysts in clear coats, car paint line operators could “lower the oven temperature without lowering yield and hence save some energy and carbon dioxide emissions,” Weikard says.

Auto paint shops also could “improve their carbon credentials significantly” with a new biomass-based isocyanate from Bayer, says Berta Vega Sánchez, a coatings marketing manager. Desmodur Eco N 7300, based on pentamethylene diisocyanate, is made with a cornstarch-derived amine that accounts for 70% of the isocyanate’s carbon content. By combining it with biobased resins, Sánchez says, paint makers can formulate high-performance coatings that are mostly biobased.

Bayer isn’t the only firm to have developed a biobased isocyanate to green up the category’s image. Two years ago, Vencorex came out with Tolonate X Flo 100 aliphatic isocyanate, which is 25% renewable materials based. The firm hasn’t revealed the source of its renewable content.

Sutin Chamulitrat, global marketing director for Vencorex, a joint venture between Thailand’s PTT Global Chemical and Sweden’s Perstorp, says he is eyeing a day when other reactive chemistries displace isocyanates. Chamulitrat adds that Vencorex is researching alternatives, but he expects it will be a long time before they make inroads. 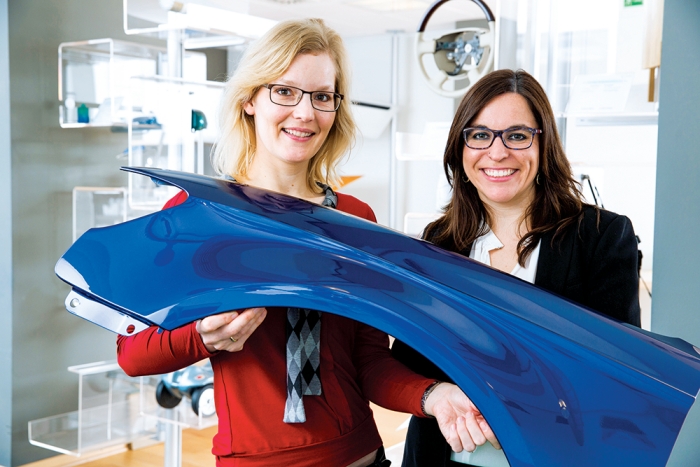 Paint makers are concerned too. R. Bruce Williams, North America product manager at Axalta, says that, given isocyanate exposure concerns, the firm encourages workers to closely follow safety protocols. Axalta is interested in alternatives, but it has been studying cross-linking technologies for more than 30 years, and so far none of the alternatives match the performance of isocyanate-containing coatings, he says.

The silane oligomers have many of the same high-performance characteristics as isocyanate-containing oligomers, according to Görlitzer. But they provide even better scratch resistance than typical isocyanates because of Vestanat EP-M’s silane cross-linking chemistry, he says.

Reducing workers’ isocyanate exposure was also a consideration in Dow’s development of its new ambient-temperature-curing Paraloid Edge Iso-Free Technology, says Keith J. Watson, global coatings R&D director. The company developed the system, intended for refinishing cars and for use on wood and metal items such as construction equipment and cabinetry, in anticipation of more stringent government regulation, he adds.

The solvent-borne, two-part polyurethane is made by reacting carbamate-functional polymers with dialdehydes as isocyanate replacements, Watson says. “This is an innovation that will work as well as or better than traditional polyurethanes,” he says. But Watson cautions that painters must still limit their exposure to solvents that evaporate from the paint as it dries.

Robert Skarvan, performance coatings director for resins supplier Nuplex, says his firm has been trying to develop an isocyanate-free high-performance paint system since 2007. “We’re sensitive to isocyanate issues,” he says, acknowledging a “stigma” associated with them as hazardous materials.

The Australian firm, which became a big player in paint raw materials with the 2004 acquisition of AkzoNobel’s resins business, is offering a two-part alternative, dubbed Acure, to polyurethane coatings.

Developed by the firm’s R&D staff in the U.S. and the Netherlands, the Acure system depends on three components: One is an acrylate-functional material blended with the second, a malonate-functional polyester. The other is a proprietary blocked catalyst.

Skarvan figures that auto factory and refinished coatings may be a market for the Acure system over the long term because of its chemical resistance, durability, and fast drying time. But initially he hopes to promote the system for its performance and lack of isocyanates to firms making high-end industrial, marine, and maintenance coatings.

Darin Nellis, marketing and sales director for Hybrid Coating Technologies, says his firm is also advancing isocyanate-free technology because of worker exposure concerns. “Alternatives are only moving ahead now because of public demand for cleaner products,” he says. Hybrid Coating claims its Green Polyurethane system is equal to or better than isocyanate-containing paints.

One component of the system includes mono- and polycyclic carbonate and epoxy oligomers; the other has aliphatic or cycloaliphatic polyamines with primary amino groups in the presence of a hydroxy-urethane modifier. When reacted, the components form what the company describes as a hybrid nonisocyanate polyurethane coating.

The U.S. firm, an offshoot of Polymate, an Israeli research organization that developed the Green Polyurethane technology, is already selling systems to formulators and distributors of concrete floor coatings, Nellis says.

Another market that could be a proving ground for high-performance, isocyanate-free paints is oil rig maintenance coatings, Nuplex’s Skarvan says. Painters on rigs wear protective clothing and masks, but others working nearby without protective equipment could easily be exposed to toxic fumes on windy platforms.

But replacing isocyanate-containing coatings in the most demanding applications will come slowly. Makers of the alternatives acknowledge that they face a difficult growth curve and that they must still prove themselves to some skeptical customers—both formulators of paints and the paints’ ultimate users.

Axalta’s Williams, for one, is open to isocyanate alternatives but knows his products must also meet the needs of demanding customers such as the automotive industry. “We continue to explore alternative options that will provide the best balance of cost, properties, and low-temperature cure and that will match isocyanate-cured polyurethane topcoats,” he says. Hope exists for the kinder, gentler replacements, but proving that they work well will take a long time.

Coatings
Sponsored content: High performance, built in
Policy
PPG will remove lead from paint
Business
Seeds Of A Castor Oil Revival
Share X
To send an e-mail to multiple recipients, separate e-mail addresses with a comma, semicolon, or both.
Title: High-Performance Isocyanate Paint Ingredients Come Under Scrutiny
Author: Marc S. Reisch
Chemical & Engineering News will not share your email address with any other person or company.

Comments
Phil Phillps (July 14, 2015 2:53 PM)
Excellent synopsis of the ISO situation. This topic is one that permeates the coatings industry globally. It begs the comment . . . "there exists, at the end-user portion of the value chain, a fairly broad set performance requirement s, some of which is overkill with current ISO-containing urethanes. Based on this premise, the industry needs to push-back and "soften" requirements, and if done successfully, would open up bona fide non-ISO substitutes."
Reply »