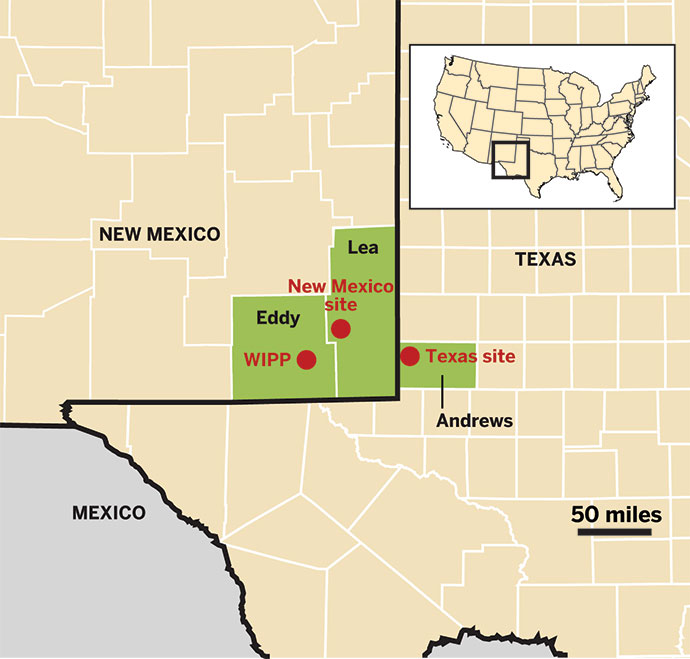 Southeast New Mexico’s nuclear corridor extends miles through a desert dotted with sagebrush and known for its long stretches of lonely road. For years, people in this part of the state have relied on transuranic waste storage and uranium enrichment to maintain their economy. Now, this corner of the Land of Enchantment is offering up its expertise and relative isolation to help solve the nation’s lack of storage for used fuel from commercial nuclear power plants.

The people of New Mexico have learned about the nuclear industry’s storage needs, and they want to help, says John Heaton, who was recently chairman of the Eddy-Lea Energy Alliance (ELEA), a company created by two southeastern New Mexico counties and the cities in them. “So being able to solve a national problem is important to us.”

Earlier this year, the alliance inked a deal with energy company Holtec International to construct and license an interim storage facility for used commercial nuclear fuel. The underground facility would occupy 32 acres of land on a parcel of 1,000 acres acquired by ELEA and could hold as much as 75,000 metric tons of nuclear waste.

The planned facility in New Mexico is one of a few sites that have been proposed in the U.S. for private waste storage. If the alliance gets approval from Congress, these sites might signal a shift away from decades-old national policy for placing commercial nuclear waste in a central geologic repository at Yucca Mountain, in Nevada. That federal project is stalled.

Waste Control Specialists, a Texas-based company that handles hazardous and radioactive wastes, announced a partnership with the French nuclear power plant manufacturer Areva earlier this year to develop an interim storage facility in western Texas for commercial used nuclear fuel. The site, in Andrews, Texas, is about 30 miles from the Waste Isolation Pilot Plant (WIPP) near Carlsbad, N.M., a city that is part of ELEA. WIPP, a repository for transuranic waste from defense operations, has been closed since a radiation leak in February 2014.

The expectation with interim storage is that the waste will eventually be moved to a long-term repository, like Yucca Mountain.

“Who knows whether in five, 10, or 20 years someone will come up with a good solution for using that fuel above ground?” Heaton says.

Because there is no national geologic repository for nuclear waste, spent fuel from U.S. electricity generation is stored in cooling ponds on-site at active nuclear power plants. When it is cool enough, the waste is moved into secure dry cask storage, which is also on-site at the nation’s nuclear power facilities. Currently, the country has about 60 commercially operating nuclear plants.

In addition, there are so-called orphan sites in the U.S., says Pierre Paul Oneid, senior vice president and chief nuclear officer for Holtec. “The plants have been decommissioned,” he explains, and their waste is stored on-site.

More than 70,000 metric tons of nuclear waste is held at power plants in 35 states. But used fuel wasn’t supposed to stack up at electricity generation sites.

The Nuclear Waste Policy Act of 1982 mandated that the Department of Energy develop a repository for nuclear waste. The law required DOE to start disposing of waste held by nuclear power plants in 1998.

When the agency failed to do so because no repository had been completed, DOE began to owe the power plants storage fees.

In October 2014, the Government Accountability Office, the investigative arm of Congress, reported that the cost of storing nuclear waste had reached about $3.7 billion since DOE missed its 1998 deadline. The department’s liability is expected to total more than $21 billion by 2071, it adds.

“That’s real money,” says ELEA’s Heaton. “Getting interim storage in place would stop the extraction from the Treasury.”

“The future of nuclear energy is finding a solution for high-level waste,” Oneid of Holtec says.

However, not everyone agrees that interim storage would be cheaper or that anywhere in New Mexico is a place for consolidating spent fuel.

“There are many things nuclear in New Mexico, but commercial spent fuel is not one of them,” says Don Hancock, director of the nuclear waste program at the Southwest Research & Information Center, a nonprofit watchdog organization based in Albuquerque, N.M.

New Mexico is home to two national laboratories with nuclear energy and nuclear weapons research programs, the site of the first nuclear test in the U.S., and the location of a uranium enrichment facility that opened in 2010. But the state doesn’t have any commercial nuclear power plants—and it’s not generating any spent fuel, Hancock says.

What Hancock wants is a community outside of New Mexico with an operating nuclear power plant to come forward with a proposal to develop a consolidated nuclear waste storage facility. He’s been working on this idea for four decades without any takers, he says.

Meanwhile, the law that required DOE to begin storing commercial nuclear waste in the late 1990s also restricted the department to using only a federal site for storage.

But a bipartisan Senate bill (S. 854) could change that requirement. It would establish an independent agency to oversee the process for finding a national storage site. The legislation also would allow DOE to revisit its decision to combine defense and commercial waste for storage. The Senate Energy & Natural Resources Committee will consider S. 854 in August.

“The challenge with any of this is the politics of it—it’s not the technical part,” says Everett Redmond, senior director for policy development at the Nuclear Energy Institute in Washington, D.C.

If Holtec and ELEA garner approval for a storage site in southeastern New Mexico, the facility could be receiving commercial fuel within five years.