[+]Enlarge
Credit: Bert Weckhuysen/Utrecht U.
These atom probe tomography images (roughly 50 nm wide) show that, compared with an untreated zeolite crystal (left), steam-treated ones (right) have aluminum atoms (green) that cluster throughout the solid and accumulate along grain boundaries (arrow). 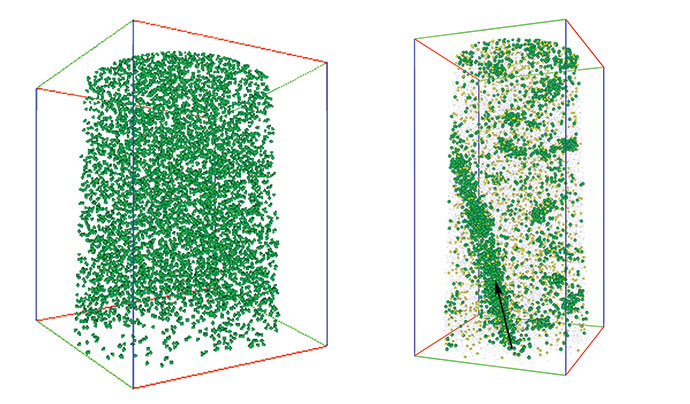 Credit: Bert Weckhuysen/Utrecht U.
These atom probe tomography images (roughly 50 nm wide) show that, compared with an untreated zeolite crystal (left), steam-treated ones (right) have aluminum atoms (green) that cluster throughout the solid and accumulate along grain boundaries (arrow).

Zeolites catalyze the petroleum refining process that produces the majority of the world’s gasoline. The catalytic prowess of these porous solids emanates from aluminum atoms sprinkled throughout their silicate frames. Until now, researchers have struggled to determine precisely where the aluminum atoms reside.

By using atom probe tomography (APT), a relatively uncommon technique that maps elements in three dimensions, an international team of researchers has pinpointed the locations of aluminum atoms in a commercial zeolite known as ZSM-5 (Nat. Commun. 2015, DOI: 10.1038/ncomms8589). The group has also learned how steaming, a standard procedure for activating the catalysts, affects aluminum’s distribution in the solids. The study may lead to methods for making better-performing, longer-lasting catalysts.

Earlier studies suggested that aluminum is distributed nonuniformly in zeolite crystals. But because of the small mass difference between aluminum and silicon, studies based on X-ray diffraction, electron microscopy, and other techniques have come up short in identifying where aluminum sits.

To get the answer, Bert M. Weckhuysen of Utrecht University in the Netherlands and Simon R. Bare of UOP, a refining technology company in Des Plaines, Ill., teamed up with APT experts Daniel E. Perea and Ilke Arslan of Pacific Northwest National Laboratory and others.

The group mapped the 3-D distribution of individual aluminum atoms and determined distances among neighboring aluminums, confirming that the element is not distributed randomly in ZSM-5 crystals. They showed that steam-treating the zeolite leads to aluminum segregation and clustering, especially along crystal defects known as grain boundaries.

This use of APT provides “a major advance in spatial mapping of light elements in zeolites,” by providing scientists with structural information unavailable until now, says University of Delaware chemical engineering professor Raul F. Lobo, who is a zeolite specialist.

Lobo explains that Brønsted acid sites that are found throughout zeolites can exhibit vast differences in catalytic properties because of the influence of nearby atoms. Crystallography provides structural information averaged over large numbers of sites, he says. “Yet, the actual bond-breaking and bond-making processes happen on specific, not average, sites.” Noting the method may be applied to many catalysis problems, Lobo adds, “The APT technique described here gets us much closer to the specific and detailed information we are looking for.”

Comments
Randal A. Goffe - Member, AIChE (July 21, 2015 4:29 AM)
This is very interesting, as it raises the question,
"Might this influence clustering of cations (e.g. Cu2+)exchanged into the zeolite?"

I would like to receive a response from the author(s).