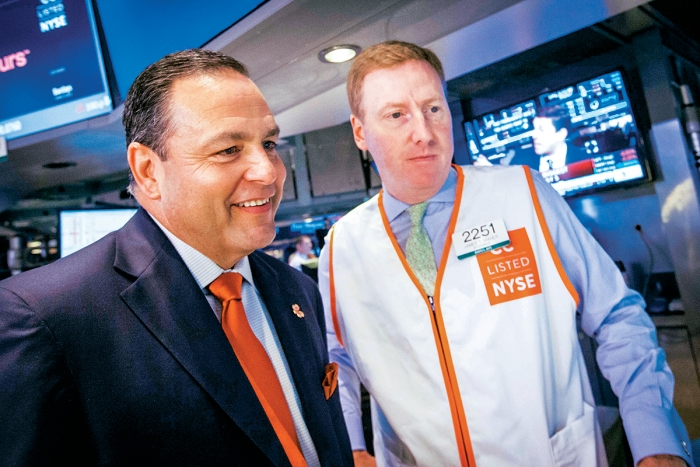 Credit: Chemours
Vergnano (left) on the floor of the New York Stock Exchange in late June.

Shares ﻿of Chemours, the former DuPont Performance Chemicals unit, officially started trading on July 1 on the New York Stock Exchange. For Mark P. Vergnano, chief executive officer of the new firm, the event marked the culmination of months of planning and heralded the dawn of a company that proudly asserts it is powered by chemistry.

Talking with C&EN at the stock exchange a few days before Chemours made its debut, Vergnano characterizes the firm as made up of cyclical but “solid businesses that didn’t fit the future of DuPont.” His job, he says, will be to maximize profits through both good and bad times, pay dividends to investors, reduce debt, and manage the environmental and legal liabilities that come with chemical operations dating back many decades.

Vergnano, 57, joined DuPont 35 years ago fresh out of school with a degree in chemical engineering. He shares an engineer’s perspective with the current and most recent past DuPont chief executives—Ellen J. Kullman, a mechanical engineer, and Charles O. Holliday Jr., an industrial engineer—who transformed DuPont into the agriculture- and industrial-biotechnology-focused business it is today. Vergnano is now set to put his stamp on the businesses they cast aside.

With $6.4 billion in sales last year, Chemours is among the largest and most profitable producers of the white pigment titanium dioxide. It is heir to one of the best known fluorochemical businesses, which includes Teflon nonstick polymers and Suva refrigerants. The firm is also a prominent industrial chemical supplier, with products including sulfuric acid for petroleum refining and sodium cyanide used to extract gold from ore.

However, the firm is starting life with $4 billion in debt and a TiO2 business at the bottom of the business cycle. Vergnano acknowledges those drawbacks but says that in devising a solution, “we start with a very strong base.” He sees a number of profit-enhancing opportunities on the horizon. 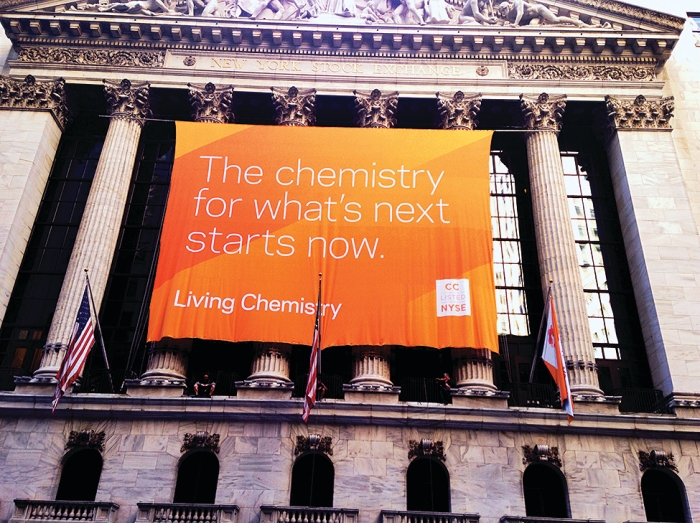 In TiO2, Chemours has invested a half-billion dollars so far to increase production in Altamira, Mexico, by 200,000 metric tons per year. Despite current low TiO2 prices, Vergnano says the expansion, to be completed in mid-2016 at a total cost of about $600 million, makes sense.

The project will enhance Altamira’s position as “the lowest-cost TiO2 facility in the world.” Also, by reducing output at Chemours’s other TiO2 locations, “we can save between $20 million and $70 million a year, even with the new capacity coming on,” Vergnano says. When the TiO2 business cycle improves, the new capacity “gives us tremendous upside from an earnings potential,” he adds.

Vergnano is also optimistic about the company’s new line of hydrofluoroolefin-based refrigerants. Developed in partnership with competitor Honeywell, the refrigerants replace environmentally less friendly options. He expects that Chemours will need to invest in a new plant sometime after 2018 to keep up with increases in demand.

In the meantime, even as rumors swirl about the potential sale of the sulfuric acid and sodium cyanide businesses, Vergnano says he’d like to invest in the growth of those units.

“Sodium cyanide has been oversold for the past several years,” he says. “So we would like to round out the capacity for that business because we have customers who would like more—especially our gold-producing customers. We put sulfuric acid in the same sort of bucket.”

The challenge for Chemours, Vergnano says, is “to ramp up growth opportunities and get costs to the right place.” More than 450 job cuts announced in early June, and possible further cost reductions at the end of 2016, will help with the latter task, he says. R&D employment at the firm, he predicts, will remain stable after the recent round of cuts.

Looming ahead for Chemours is a $100 million dividend payment due to shareholders in September. DuPont committed the new company to make that first quarterly payment before the spin-off. But “subsequent dividends will really be the purview of the new independent board along with the dividend policy they want to bring forward,” Vergnano says.

DuPont calculated the dividend payment based on what the new company could afford to pay during the middle of the business cycle for TiO2, the firm’s biggest moneymaker, Vergnano says. At the moment, the cycle is closer to the bottom. Net income for Chemours, had it been a stand-alone company, peaked in 2010 at $1.4 billion. Last year the firm recorded net income of $400 million.

“We are a cash-generating company,” Vergnano explains, and “we want to bring cash back to our shareholders.” But “we also want to have a sustainable, predictable dividend.”

Environmental and legal claims on some of that cash may dent future payouts. They include, for instance, environmental liabilities of $292 million that could rise to $650 million “under adverse changes in circumstances,” according to documents Chemours filed with the Securities & Exchange Commission.

“We are very comfortable with the liabilities we’ve taken over,” Vergnano insists. “We see no surprises ahead.”

Instead, the new CEO says he plans to spend the next year and a half positioning Chemours as a strong commodity chemical player in all phases of the business cycle. “What we have on our plate for the next 18 months,” he says, “will deliver tremendous value to the shareholders—and will keep us busy.”

Finance
Chemours eyes settlement of DuPont beef
Economy
Moody’s rates Chemours debt speculative
Specialty Chemicals
Chemours’s Paul Kirsch on why his company needs to change and how it will do it
Share X
To send an e-mail to multiple recipients, separate e-mail addresses with a comma, semicolon, or both.
Title: C&EN Talks With Mark Vergnano Of Chemours
Author: Marc S. Reisch
Chemical & Engineering News will not share your email address with any other person or company.