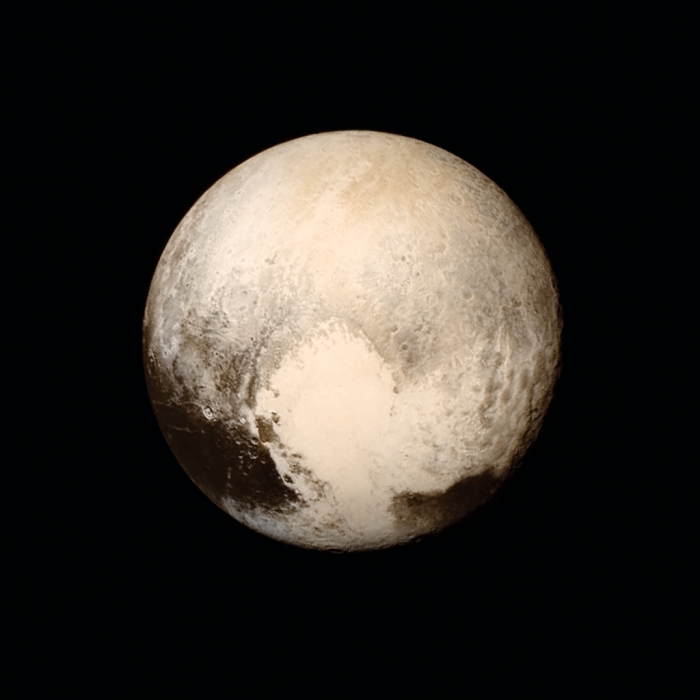 This mission—a 3 billion-mile journey that took nearly 10 years and was led by the Johns Hopkins University Applied Physics Laboratory and NASA—was a milestone in space exploration. It means that humankind’s spacecraft have now visited every planet in the solar system (see page 6).

So what do you know about Pluto? I knew that Pluto had been demoted to “dwarf planet” and that it was the last one of the planets to be discovered (this happened relatively recently actually, in 1930). What I didn’t know is that it’s also the only planet to have been discovered by an American. Indeed, it was astronomer Clyde Tombaugh who first observed Pluto. And here is a fascinating story: Like all the other planets, Pluto was named after a Roman god, in this case, after the mythical god of the underworld who could disappear at will. According to Roman myth, when someone died, they traveled to the underworld. To get there, they had to cross the River of the Dead—the River Styx—after paying the ferryman, Charon, who would carry the dead across the river in his boat (everyone was buried with a coin so they could afford this). Accordingly, Pluto’s moons are named as follows: Charon, after this ferryman of the underworld; Styx, after the river; Nix, after Charon’s mother, goddess of darkness and night; Hydra, after the nine-headed snake that guarded the entrance to the underworld; and Kerberos, after the multiple-headed dog brother of Hydra and also guardian of the underworld.

Despite all this talk of death and the underworld, New Horizons—which is the size of a piano—continues to be extremely active: While it speeds away from Pluto, it is also busy sending back to Earth the data it took during that relatively brief flyby. And it will continue to do so over the next 16 months. The images and spectra should tell scientists more about Pluto’s surface composition and geology. So another fascinating journey now starts for those scientists tasked with unraveling the data and revealing the secrets that those images no doubt conceal.

Thanks to a collaboration with Spanish organization Divúlgame.org, C&EN is now able to provide Spanish translations of some of our best content. We want to make cutting-edge science more accessible to the Spanish-speaking chemistry community, and this is our contribution. It gives those born in Spain, Latin America, or the U.S. but whose first language is Spanish the opportunity to read this content in their mother tongue. We hope you enjoy it and find it useful.

Our first translation was a guest editorial by Sergio Pastrana, foreign secretary of the Cuban Academy of Sciences, which was followed by an article about 3-D-printed soft robots. This week we bring you an overview of the Presidential Green Chemistry Challenge Awards. And there’s plenty more to come, so let us know what you think.

If you want more content in Spanish, the American Chemical Society and the Sociedad Química de México have launched a similar initiative. Together they are now broadcasting live webinars in Spanish. For more information, visit http://bit.ly/1Ld4bC8.