Pondering A Push Toward Retirement

Walter Chazin can’t imagine retiring. The Vanderbilt University chemistry professor and head of its Center for Structural Biology is a workaholic who spends 60-plus hours a week in his laboratory.

Pondering A Push Toward Retirement

But as Chazin, 60, nears retirement age, leaving his job is something he’s started to think about. He’s sure he’ll stay in science, but he’s not sure whether that will mean in the lab, as a manager, editing a journal, or something else.

But no matter what his future holds, he is skeptical of a proposed National Institutes of Health program that would encourage senior scientists in academia to leave their labs. Earlier this year, NIH requested comments from the research community about such an award.

The concept received a decidedly mixed response. Some commenters endorsed the idea of creating an incentive for aging scientists to stop seeking new grants. But many thought it was a bad plan to decide grants on anything other than merit. Others argued the agency shouldn’t direct any more money to scientists who have already had, in some cases, decades of NIH funding.

Researchers will naturally wind down their labs when they are ready, Chazin says. “When I’m done, I’m done.”

ROLE REVERSAL
[+]Enlarge
A larger percentage of NIH-funded principal investigators are now over age 66 than under age 35.
SOURCE: NIH 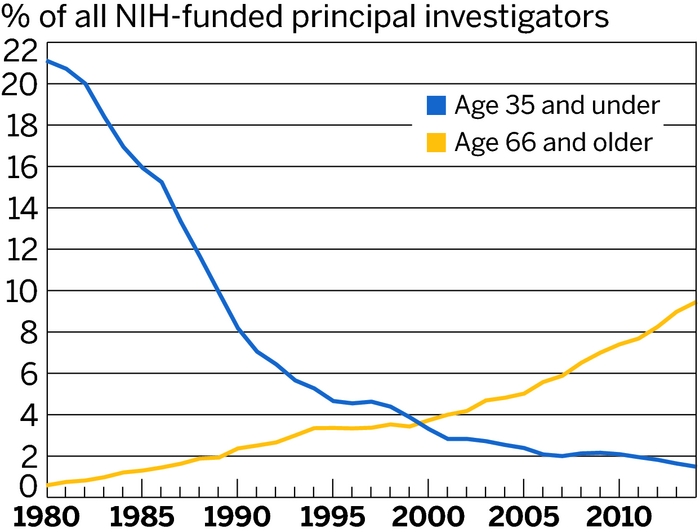 A larger percentage of NIH-funded principal investigators are now over age 66 than under age 35.
SOURCE: NIH

NIH hasn’t decided yet whether it is going to create a new grant to support the retirement of senior scientists or what it would look like, says NIH Deputy Director Sally Rockey. But the agency’s quest to encourage scientists to retire is a response to a clear problem: the lack of academic jobs and falling number of grants for early-career scientists. The average age of scientists receiving their first individual research grant (an R01 or its equivalent) is now at an all-time high of 42.

“As scientists, we all do what we love,” which encourages productive, aging researchers to keep working, Rockey explains. But this also makes it harder for young people who are considering a career in science. “How do we create a system where we have more inflow and outflow?” she asks.

Richard Laursen says that when he decided to retire, “I had lost most of my grant support and things were kind of winding down naturally, which probably happens to lots of people.”

But when the Boston University emeritus chemistry professor retired at age 71, he felt he had more to contribute to science. “I think your brain doesn’t age as fast as your body,” says Laursen, now 77. His retirement package allowed him to keep his university office and lab space until it was needed by someone else.

So he started up a whole new research program—completely self-funded—examining dyes and textiles. That means no more writing grants or struggling for funding, he says. “It’s nice to be out of the rat race.”

Although he and many of his colleagues have chosen to retire, Laursen has seen scientists who continue to run large labs and get grants into their 80s and 90s. (See page 10 for stories of some successful older chemists.) Some are doing well, he explains, but other aging researchers continue to receive government funding long after their days of making important discoveries end. “There are people who are well-known and probably nobody wants to cut them off,” he says. “I’m not quite sure of what the most humane way to stop that is.”

Laursen sees the potential advantage of grants to help older scientists take the leap to retirement. “If the net result is the money goes to the younger people, it is probably a good idea.”

That’s what the Federation of American Societies for Experimental Biology (FASEB) decided when it suggested a “transition grant” for older scientists in a January report, before NIH’s move. That document outlines possible ways to make NIH’s funding more sustainable. 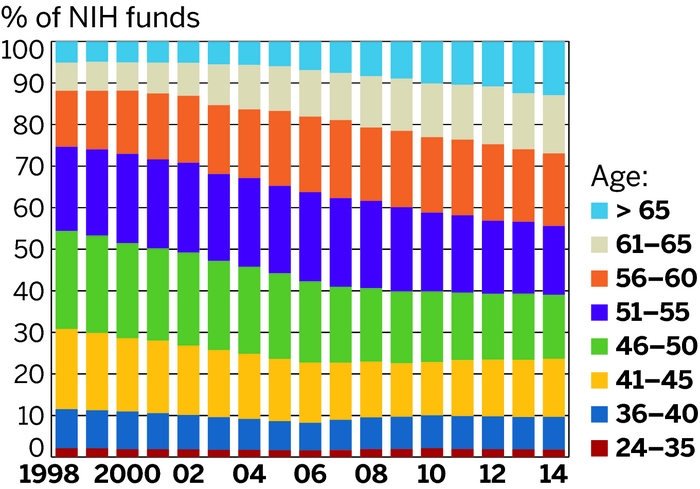 “Over the past 40 or 50 years, the NIH funding system has evolved in virtually constant growth,” explains Parker B. Antin, a professor of cellular and molecular medicine at the University of Arizona and chair of the FASEB committee that prepared the report.

The constant increases in NIH funding from the 1970s through the early 2000s made the agency’s flat or declining budgets during the past decade feel even harsher to academic researchers, Antin says.

There were dozens of recommendations in the FASEB report aimed at helping NIH deal with its new financial reality. But the notion of a retirement-related grant hit a nerve. Even within FASEB, it was controversial enough that the group didn’t submit a response to NIH’s request for information because the organization couldn’t come to a consensus on what to recommend.

But there needs to be some way to help scientists deal with what Antin calls the “brutal reality” of closing their labs after decades doing research.

“There were good intentions behind this idea, and I think it still has potential,” Antin says.

NIH already has a series of programs aimed at helping early-career scientists, including targeted grants and preferential funding. The agency’s request for feedback on a potential “emeritus award” was a call for the community’s best ideas on how to address the problem from the senior scientists’ side, Rockey explains. “We didn’t really have any preconceived notions,” she says.

NIH can’t force a mandatory retirement age on the scientists it funds and wouldn’t want to even if it could. “You still have to compete and be viewed as high quality,” she says. “We see that 10% of our principal investigators are over 66, so obviously people are productive throughout their lives.”

The call for proposals suggests the grant could help scientists who are thinking about retirement transition their work to a younger scientist or close their labs while they move on to more teaching and mentoring.

That’s what happened for Masato Koreeda, 72, now an emeritus professor of chemistry at the University of Michigan. About a decade ago, with his grant funding waning, he volunteered to teach more classes. Gradually he quit accepting graduate students, moved into a smaller lab, and scaled down his research. Now, he’s working alone.

Koreeda doesn’t like the idea of an NIH retirement grant. Faculty members who are truly interested in transitioning their work to younger colleagues could write a joint proposal with them, he says. “I don’t think NIH needs to spend money on this kind of thing.”

When it comes time to open space for younger scientists, Koreeda says, “I hope all retiring faculty have the decency to decide when to completely disappear. I definitely intend to do that.”

One of the biggest concerns about NIH’s proposal came down to money. Like Koreeda, many researchers argue that no money should be taken away from the larger grant pool. But Rockey isn’t envisioning a program big enough to make a dent in its major grant funding problem.

Ed Behrman, 84, retired 10 years ago from active work as a chemistry professor at Ohio State University. In the past decade, Behrman has kept up his one-person lab, synthesizing new chemicals for colleagues who need them. At Ohio State, “as long as you’re publishing, you can keep your office and your lab,” he says. “I’ve never stopped publishing.”

Although he sees the problems younger scientists have, “I’m fairly strongly opposed to thinking in categories, to race or sex or, in this case, age,” he says. “All of these decisions ought to be based on merit and merit alone.”

In fact, after a 10-year drought, Behr­man just received his first NIH grant in a decade in a joint application with several colleagues.

“Quite a few people my age really jumped at the chance to retire,” but Behr­man wants to keep working, whether he has funding or not. “I do the work because I love it.”

Education
U.S. NIGMS pulls out of F31 predoctoral fellowship program
Policy
U.S. National Institutes of Health backs off funding limits for researchers
Policy
NIH Adapts Grant Resubmission Rule
Share X
To send an e-mail to multiple recipients, separate e-mail addresses with a comma, semicolon, or both.
Title: Pondering A Push Toward Retirement
Author: Andrea Widener
Chemical & Engineering News will not share your email address with any other person or company.

Comments
Robert Buntrock (July 28, 2015 1:50 PM)
I've often observed that academic chemists and scientists often have the advantage of emeritus positions. Even without grant money, office space, computer and library access, and other perks are usually made available. For non-academics, those positions and perks are not available. There's no such thing as emeritus industrial chemists (with the exception of Helen Free). NLRB rules forbid consulting for your former employer until 6 months have passed. However, many of us industrial chemists who took "early retirement" developed consultancies for other clients and managed to keep our oar in. I'm "semi-retired" and still having fun.
Reply »