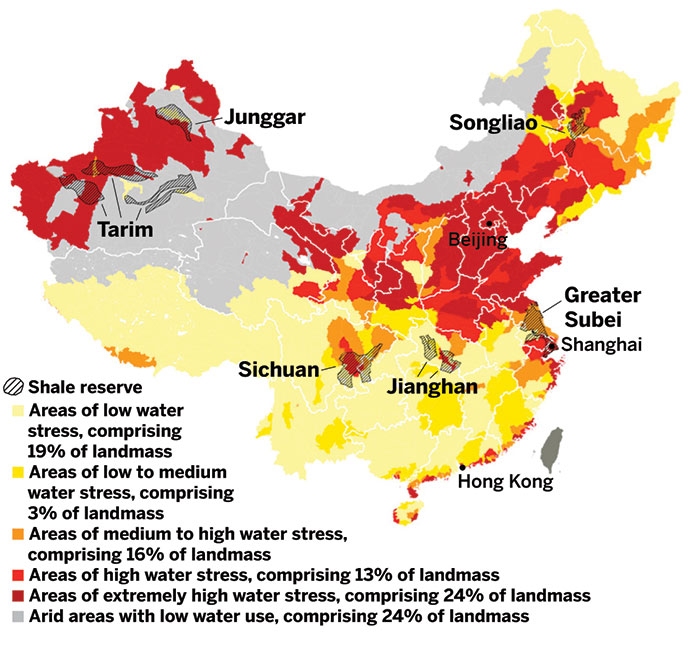 In the verdant forests of China’s southwestern Sichuan province, the discovery last spring of the first commercially viable shale gas field buoyed government hopes that China will be the next big market for the trapped hydrocarbons. But the lack of environmental regulation and impact studies is a problem, analysts and government officials say. The slashing of government output targets for shale gas last summer has left some environmentally minded people breathing a little easier.

Hydraulic fracturing, or fracking, a process that creates fractures deep below Earth’s surface to release natural gas trapped in shale formations, has revolutionized the energy landscape in the U.S., where the drilling technique originated. For the past decade, U.S. companies have pumped billions of dollars’ worth of natural gas through fracking. Shale gas has catapulted the U.S. on a fast track to energy independence—to the envy of China and other countries.

China is the world’s second-largest economy after the U.S., and it has become the globe’s largest coal consumer and the biggest importer of crude oil. Its natural gas imports are growing. Chinese leaders view these trends with discomfort.

Against this background, China’s vast shale gas resources present a ray of hope for greater energy independence. According to Chinese and U.S. estimates, China has the world’s largest shale gas reserves, an estimated 31 trillion m3.

China now meets most of its energy needs through coal, with natural gas accounting for only about 5% of annual energy consumption. It hopes to increase natural gas’s contribution to at least 10% by 2020.

The country’s leaders began looking closely at shale gas after seeing its success in the U.S., says Xiaoliang Yang, a research analyst at the World Resources Institute (WRI), a global think tank.

But the shale gas industry in China is relatively new and is concentrated in Sichuan province. Experts say regulations do not ensure sufficient environmental oversight.

Shale exploitation in the U.S. has come with environmental risk. Critics point to unanswered questions regarding the mixture of chemicals and water that companies pump into the ground to create fractures (C&EN, Aug. 18, 2014, page 7), the emissions of greenhouse gases from wells, and the disposal of wastewater.

In China, environmental concerns are heightened because of the country’s poor history of environmental stewardship, lack of civil rights, and an opaque energy sector dominated by two powerful state-owned conglomerates.

For these reasons, some people in China have greeted with relief last year’s slashing of shale output targets. Last August, the head of China’s National Energy Administration (NEA) announced that the target output by 2020 has been reduced to 30 billion m3, down from 60 billion to 100 billion m3.

Yang and other analysts speculate that the cuts have less to do with environmental concern than with unexpected technical challenges. Geological conditions make shale more difficult and expensive to exploit in China than in the U.S.

The lowered targets do provide breathing space for environmental regulation and enforcement to catch up, says Yuan Xu, an assistant professor at Chinese University of Hong Kong who has studied China’s shale policies.

“The regulatory system is relatively weak and not fully enforced in China,” Xu says. Officials in China’s county-level governments, who ostensibly oversee environmental practices in their jurisdictions, “don’t have enough equipment, and their budget is very tight,” he says.

China’s Ministry of Environmental Protection (MEP) is aware of the regulatory problems. In a 2013 paper presented at a conference in Calgary, Alberta, three ministry employees analyzed the state of regulations for shale gas, which is considered an unconventional resource, and found them lacking.

The authorities have “yet to consider environmental protection, ecological and human health impacts” when selecting sites for shale development, and no research has been conducted on pollution levels from China’s shale developments, they wrote. Some products of fracking are not regulated in China, including methane.

Another problem is the safe disposal of wastewater from fracking, which is currently not regulated in China, the ministry researchers wrote. Water that is pumped underground during drilling comes back to the surface as salty water, Yang says. “That is not a pollutant as defined by China’s regulation,” he explains. “That’s a loophole given to the companies.” Fracking wastewater can also contain radioactive substances, heavy metals, and hydrocarbons.

MEP has been conducting fieldwork in Sichuan province to try to understand, and eventually manage, shale development, Yang has learned. His contacts at the ministry tell him that they are working on regulations to govern the sector, but it is not clear when they would be implemented.

However, MEP, as well as NEA, could find its ability to regulate hampered by two companies with more political power than it has: Sinopec Group and China National Petroleum Corp., the state-owned giants of China’s energy sector. The heads of these companies, Yang says, “can talk with the premier directly.”

Shale gas has the potential to feed the chemical industry as well as the energy sector, but China’s chemical industry is not expected to benefit significantly from shale gas. In the U.S., increased supplies of ethane, a component of shale gas, have lowered the cost of this primary feedstock for U.S. chemical and plastics companies, spurring up to $100 billion in new investments in the petrochemical industry, according to an IHS report. China’s plastics industry, on the other hand, relies primarily on oil-based naphtha as its main feedstock.

In addition, according to consulting firm McKinsey & Co., most shale wells discovered in China have been “dry,” which means the natural gas is mostly methane and contains only low amounts of profitable, liquefiable gases such as ethane, propane, and butane.

In the meantime, foreign companies continue to partner with Chinese shale gas firms, bringing their expertise and experience to the nascent industry. One of the latest is the U.S.-based well-completion pioneer FTS International. Last year, it established a joint venture with Sinopec, called SinoFTS, to provide shale gas development services in the Sichuan Basin.

The entry of specialized fracking equipment manufacturers marks a new stage of shale exploitation in China, a direction that even some environmentally conscious people say is necessary for the country.

“What can we do?” Yang asks, laughing. “The only thing is to import gas from Russia, Burma, Pakistan. And you never know when they will cut your supply. We don’t have choices. That’s why we use coal.”