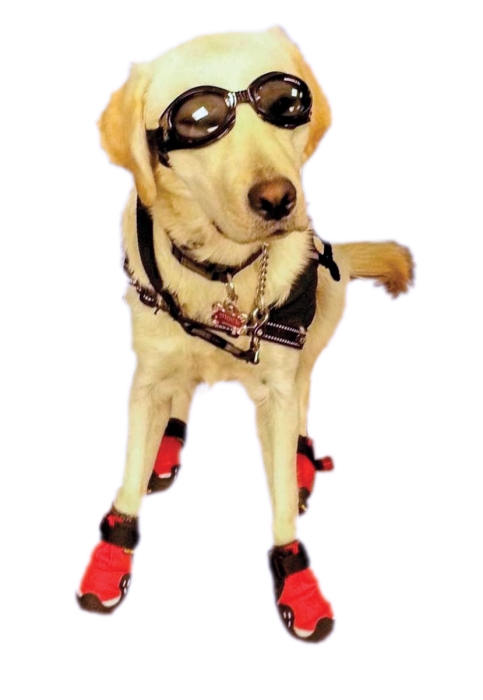 A dog dressed in red booties and swimming goggles has been getting some quizzical glances at the University of Colorado, Denver. But personal protective equipment (PPE) isn’t just for humans. Undergraduate student Stephanie Akright learned this firsthand this past semester when an Iraq War veteran signed up for the laboratory Akright was teaching at the school.

Before the semester began, Akright says, she had concerns about keeping the student’s service dog safe. But after running through the procedures with Catherine Rathbun, the laboratory safety coordinator, and witnessing how well protected the dog would be from chemicals, her uneasiness decreased. By the end of the semester, Akright says, “the dog’s training made her better behaved than some of my students.”

Rathbun tells Newscripts her main safety consideration was making sure the dog was not exposed to chemicals. Thus, Rathbun required that the dog wear booties and goggles and stay on a mat while in lab. Beyond PPE considerations, Akright describes other precautions that were implemented to ensure the animal’s safety: “We wanted quick access to the exit for both the animal and the student and placed the mat in a low traffic area of the lab, which was also in close proximity to a safety shower and the student’s bench.”

PPE-clad pooches could be coming to a teaching laboratory near you. Sheila Kennedy, a safety coordinator at the University of California, San Diego, points out that the Americans with Disabilities Act requires universities to make reasonable accommodations for service animals. Kennedy says they have not yet needed to make such accommodations in the chemistry and biochemistry department’s teaching labs at UCSD, but it is something they have given a great deal of thought. Following her experience, Akright says, “I have hopes that more students who need service animals won’t skip lab classes just because they have a dog accompanying them.”

Jeffrey M. Carney is always trying new ways to share the excitement he gets from chemistry with his students. An assistant chemistry professor at Christopher Newport University, in Newport News, Va., Carney created a chemical card game, Retrosynthetic Rummy, to get his students excited about studying organic chemistry (J. Chem. Educ. 2014, DOI: 10.1021/ed500657u). 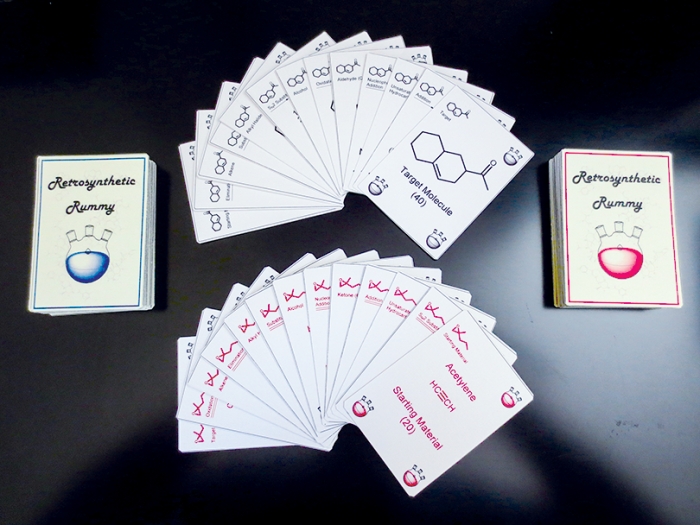 The game’s mechanics work similarly to the classic card game gin rummy. But instead of suits (e.g., hearts and diamonds), he uses different target molecules. A winning hand could involve a combination of obtaining a straight (i.e., cards representing consecutive steps in the synthesis) or obtaining cards with similar functional groups (e.g., four-of-a-kind of alcohols or alkyl halides).

Carney describes himself as a competitive person, and it was the desire to create something at the intersection of learning and competition that inspired him to develop the game. To his surprise, he also found that his students have a competitive streak too. “I even heard some creative chemistry trash talking during the game,” he says. “Once they understood the objective, they really got into it.” The feedback Carney received from his students was very positive, and he mentions that “some students would come to borrow the cards when they had downtime during the week.”

Graduate Education
Finding my voice
Lab Safety
Setup may make transferring tert-butyl lithium and other pyrophoric reagents safer
Education
What’s in your lab-coat pocket?
Share X
To send an e-mail to multiple recipients, separate e-mail addresses with a comma, semicolon, or both.
Title: Puppy Protective Equipment, Retrosynthetic Rummy
Author: Mitch Garcia
Chemical & Engineering News will not share your email address with any other person or company.

Comments
Melissa R. Crick (March 10, 2015 1:45 PM)
For the record, those are NOT swimming goggles the dog is equipped with. They're called Doggles and they're specifically made for dogs.
Reply »