ShanghaiTech Aims To Raise The Bar For Higher Education In China 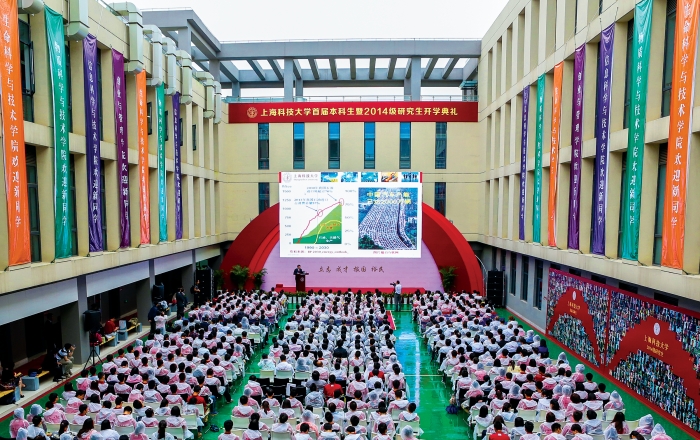 Credit: Courtesy of ShanghaiTech University
ShanghaiTech opened its doors to undergraduates for the first time on Sept. 30, 2014.

Even as China is poised to lead the world in R&D spending by 2019, the quality of the country’s scientific output still trails that of developed economies. China’s government is acutely aware of the gap and has been taking diverse measures to narrow it.

Among them is the establishment of a “research ecosystem” in the country’s most populated city, Shanghai. Last year, China opened its newest academic research institution there: ShanghaiTech University. Established by the Shanghai municipal government and the Chinese Academy of Sciences, ShanghaiTech aims to be both an exemplary institution of higher education and an engine of innovation that supports Shanghai’s dynamic economy and provides solutions to China’s needs and to global challenges. It hopes to achieve these goals through an academic system new to China.

The university’s buildings are now rising in the Zhangjiang Hi-Tech Park, also known as Zhangjiang InnoPark, in Pudong, the Shanghai district east of the Huangpu River just across from Shanghai’s historic center in Puxi. In the 1990s, the Pudong landscape rapidly transformed from farmland into iconic skyscrapers, free-trade zones, and high-technology parks. When completed this year, ShanghaiTech will be within easy reach of global R&D-based companies.

ShanghaiTech At a Glance

◾ Origin: Established by the Shanghai municipal government and the Chinese Academy of Sciences; opened to graduate students on Sept. 30, 2013

Since the 1990s, Shanghai’s economy has boomed through manufacturing and exports. The local government knew that the city could not forever depend on these activities and determined that it should foster innovation in high-technology industries to maintain its economic vibrance, according to ShanghaiTech President Mianheng Jiang. He observes that hotbeds of innovation, such as Route 128 around Boston and Silicon Valley outside of San Francisco, thrive in places with easy access to world-class research universities, which Pudong lacked. Locating the university amid global industrial R&D centers, Jiang says, was a deliberate move to fill a gap in Shanghai’s high-technology enterprise.

Before the university could rise, another key ingredient had to be in place: a network of R&D facilities with infrastructure that would attract researchers from around the world, thereby ensuring a constant influx of new people and ideas to the area and catalyzing collaborations across multiple disciplines. This network comprises three facilities built with major support from the Shanghai government.

First is the Shanghai Synchrotron Radiation Facility, a third-generation synchrotron radiation light source that has been attracting thousands of users locally and globally each year since it became fully operational in 2009. Next is the Shanghai Advanced Research Institute, which was inaugurated in 2009. The institute undertakes research and trains students in areas critical to China, such as communication technology, energy efficiency, greenhouse gas management, and advanced technologies for chronic diseases and regenerative medicine. And third is the National Center for Protein Science Shanghai, which opened in June 2013 and aims to be “an advanced global technology platform and an internationally competitive research center for protein science.”

“The leadership of the local government was forward-looking,” Jiang says. The hope is that these three research resources around ShanghaiTech would raise the quality of science, promote cross-pollination, and boost the probability of translating research into innovation.

As ShanghaiTech drew inspiration from U.S. innovation hubs for its research ecosystem, it has been drawing upon foreign expertise and partnerships to help build its human capital and advance its goals.

Jiang recruited University of California, Berkeley, chemist and materials scientist Peidong Yang to help build ShanghaiTech’s School of Physical Science & Technology (SPST). Foremost among his tasks is to select panels of experts, typically from the faculty of UC Berkeley and Stanford University, to interview faculty candidates for ShanghaiTech in the U.S. Because everyone in the panel has “very high standards,” Yang says, the caliber of ShanghaiTech’s faculty hires is “very high.”

In turn, Yang enlisted UC Berkeley chemists Christopher J. Chang and Michelle C. Chang to help with the materials bioresearch center, one of SPST’s three research centers. Among other things, the Changs, who are married to each other, advise young faculty and help them get their independent careers off the ground. Yang also convinced Stanford materials scientist Yi Cui to chair SPST’s international advisory board. “Helping China build its best research university,” Cui says, “is like my payback to China for educating me.”

Yang, the Changs, and Cui are palpably excited about the chance to help shape what could be China’s premier research university. Whether that dream will come true is uncertain, but the university is implementing practices that could lead to success.

For example, all faculty are on a tenure track. Chinese universities typically have a professoriat organized like the system in Europe, where most faculty do research under the supervision of a senior professor. In the tenure-track system, faculty do independent research from the get-go, and only those who earn tenure are retained. Some Chinese universities have adopted tenure tracks for specific academic units, but ShanghaiTech is the first to apply the practice systemwide.

“Innovation can happen anywhere, but the tenure track may be the best system to encourage innovation in academia,” Cui says. “It picks the best people and makes good people become even better. Evaluation is based on creativity, originality, and innovation.”

Implicit in the excitement about tenure track is an acknowledgment of the quality of Chinese academic research. “China does not have enough quality of higher education,” says Jiang, ShanghaiTech’s president.

The quality of higher education is a top priority in China, notes Jay Siegel, dean of the School of Pharmaceutical Science & Technology at Tianjin University, about 700 miles northwest of ShanghaiTech. He himself was hired to bolster Tianjin University’s efforts on this front. International programs with foreign hires, English as the language of instruction, and tenure-track-like options are just some of the ideas taking hold all over China, Siegel says.

Other features that ShanghaiTech hopes will ensure success are a low student-to-faculty ratio, at most 12 to 1; interdisciplinary schools and institutes instead of departments based on traditional fields; and broad cooperation with international partners in academia and industry.

The university has already signed memorandums of understanding with UC Berkeley and the University of Chicago, says Jinkang Gong, a university vice president and SPST professor. Among other things, these agreements support what ShanghaiTech is calling its 3 + 1 + N Program: If third-year ShanghaiTech students (3) complete a fourth year at a partner school (+ 1), the students will be admitted to the partner school’s graduate program (+ N), provided they meet the requirements. Gong says ShanghaiTech is pursuing similar agreements with other U.S. and European universities, including Massachusetts Institute of Technology and the University of Oxford.

ShanghaiTech plans to have 2,000 undergrads and 4,000 graduate students once it’s at full capacity. So far, SPST has hired 10 faculty and has 15 more hires in negotiation, UC Berkeley’s Yang says. The school alone plans to recruit 120 faculty over 10 years, he adds.

On top of its own hires, ShanghaiTech also enjoys the service of faculty from other universities, especially those in Shanghai. This arrangement promotes even more cross-pollination, Gong says. Also important, it gives students the benefit of the best teachers available. For example, he explains, undergrads are getting their general education economics lectures from an economics professor at nearby Fudan University.

With support from two powerful institutions—the Chinese Academy of Sciences and the Shanghai government—ShanghaiTech is poised to take flight. But progress could be impeded by external factors. A looming question is the sustainability of financial support from the city of Shanghai, which now provides 100% of the university’s operating budget. “We need to look in the private sector for support,” says Jiang, the university’s president. “Successful entrepreneurs will want to invest in education.”

Jiang has been intimately involved in the planning for ShanghaiTech for more than a decade. His scientific credentials are solid: He earned a Ph.D. in electrical engineering from Drexel University, worked at Hewlett-Packard, was a Chinese Academy of Sciences vice president for many years, and still runs a research group. But being the son of Jiang Zemin, China’s president from 1993 through 2003, opens him to unusual scrutiny. Unfazed, the younger Jiang says, “I’m just doing my job.”

By 2018, the first batch of undergrads at ShanghaiTech will graduate, and measuring success can then begin. “At minimum, we expect our graduates to get good jobs,” Jiang says. “We would like to see them become leaders in business and academia. Eventually, we would like to have Nobel Prize winners.”

Sustainability
US Senate passes sustainable chemistry legislation
Environment
P2 and ADM pair up for renewable products
Recycling
Coca-Cola bottler invests in recycling
Share X
To send an e-mail to multiple recipients, separate e-mail addresses with a comma, semicolon, or both.
Title: ShanghaiTech Aims To Raise The Bar For Higher Education In China
Author: A. Maureen Rouhi
Chemical & Engineering News will not share your email address with any other person or company.

Comments
Philip Gilbertson, Provost Emeritus, University of the Pacific (September 21, 2017 5:18 PM)
ShanghaiTech is fortunate to have Dr. Jinkang Gong to orchestrate the development of its academic programs. Based on my working relationship with him, I believe his knowledge of US and China higher education, his academic entrepreneurship, and his leadership and management skills place him among a few academics who can assure the success that ShanghaiTech aspires to.
Reply »