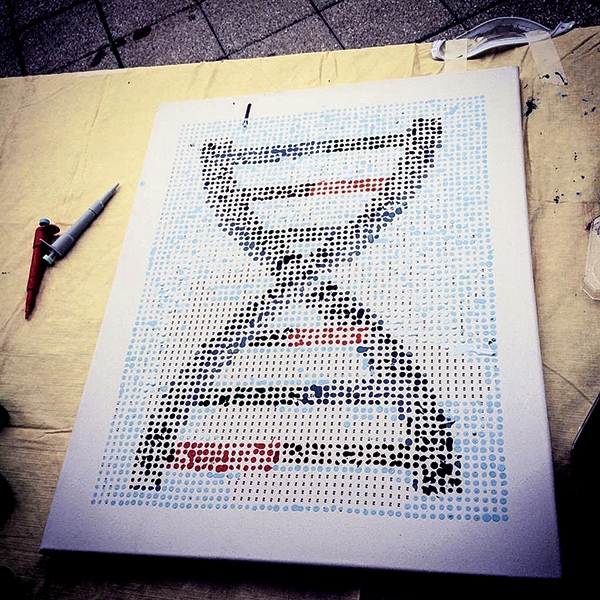 Some people experience a transcendent joy when summoning an image from a blank canvas with pastels, pencils, and paintbrushes. The Newscripts gang has recently discovered that we can add pipettes to that list.

The Association of Science-Technology Centers (ASTC) showcased an activity called Pipette by Numbers last month at the National Maker Faire in Washington, D.C. The activity, as fans of coloring books may have guessed, is a lot like a color-by-numbers exercise.

An otherwise empty canvas is covered with numbers, begging an artist to paint a specific color on top of them. Instead of using a brush, however, the artist uses a 20-μL micropipette filled with acrylic paint.

The activity, designed at the North Carolina Museum of Natural Sciences, was remarkably low-key at an event that’s become associated with hackers and high-tech gizmos. This year’s fair boasted a bevy of three-dimensional printers, an audio-powered fire extinguisher, and a Lego model of the machine the National Institute of Standards & Technology will soon use to redefine the kilogram.

But Pipette by Numbers’ simplicity is part of its allure. The activity is portable, inexpensive, and requires no electricity, so science outreach workers can set it up virtually anywhere, says Carlin Hsueh, project manager of the World Biotech Tour. The tour is a hands-on outreach program led, in part, by ASTC.

All of the instructions for the activity can be found online (www.worldbiotechtour.org/activities), which helps the World Biotech Tour spread the activity to classrooms and science centers around the U.S. and beyond. The activity has introduced kids in Japan and Portugal to proper pipetting technique while they have some fun, Hsueh tells Newscripts.

That’s not to say grown-ups don’t love it, too. While exhibiting the activity, Hsueh has seen adults spend up to an hour pipetting by number. “They just don’t want to stop,” she says. “I think they find it therapeutic.”

Therapeutic is probably too strong a word for whiteboard markers, but these dual-threat art and office supplies did bail Veljko Dragojlovic out of a potentially stressful bind. He had forgotten to bring his molecular model set to a lecture he was giving at Florida Atlantic University on stereochemistry. 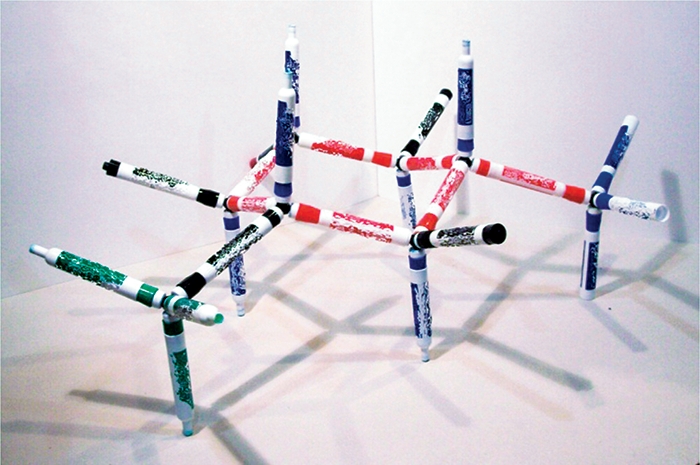 Credit: J. Chem. Ed.
MacGyvered: And these models don’t even use duct tape.

Needing a way to illustrate chiral molecules for his students, the quick-thinking Dragojlovic rigged some simple 3-D models with whiteboard markers lying around the classroom. His improvised solution worked well, and he knew that other do-it-yourself models, such as orbital models made from soda bottles, have been useful. So he set to work on making a formal and versatile marker model set (J. Chem. Educ. 2015, DOI:10.1021/ed500964n).

By attaching marker end-caps to tetrahedrons he borrowed from commercial model kits, Dragojlovic was able to build his marker models into more complex molecules. (He has also made his own tetrahedrons from wood, but that’s a bit more demanding.)

The markers come with a built-in color-coding ability. Different colored markers can highlight a molecule’s geometric features or specific atoms and bonds. And by holding the models in front of a projector’s light, Dragojlovic can easily use a model’s shadow to show his students different 2-D representations of a molecule.

His students have also responded positively to the marker molecules. “Usually, students are amused when they see the models, and I see a lot of smiles,” he says. “After a minute or two, the novelty wears off, and students focus on the subject matter.”

Consumer Products
C&EN’s holiday gift guide 2019
Graduate Education
When you are blind and in grad school
Environment
Chemistry Education For The YouTube Generation
Share X
To send an e-mail to multiple recipients, separate e-mail addresses with a comma, semicolon, or both.
Title: Pipette Pointillism, Molecular Model Markers
Author: Matt Davenport
Chemical & Engineering News will not share your email address with any other person or company.