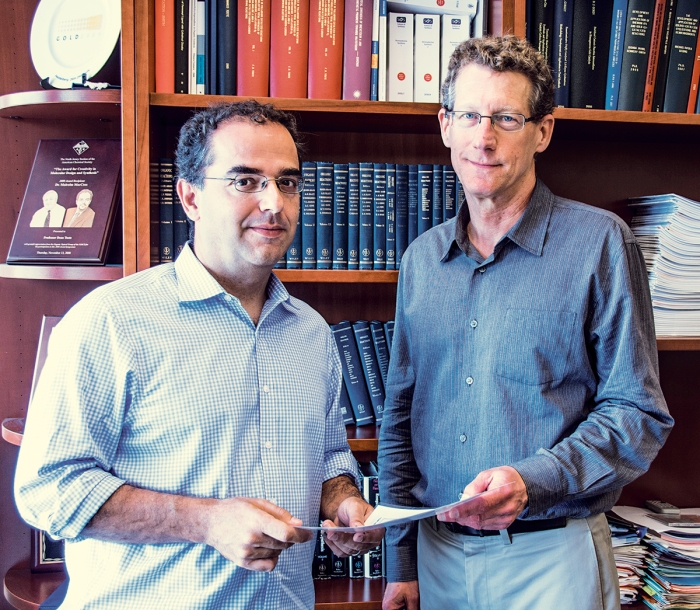 Earlier this year, a University of California, Berkeley, first-year chemistry graduate student synthesized about 1 g of a diazonium perchlorate compound (R-N2+ClO4–) as part of an effort to explore the effect of the perchlorate ion on a reaction. Working at an open bench and wearing regular prescription eyeglasses, he was using a metal spatula to transfer the material out of a porcelain funnel when the compound exploded.

Porcelain fragments shattered the lenses of his glasses and lacerated his left cornea and his face. The student required surgery on his eye but was not permanently injured and is back in the lab.

He knew he was working with an explosive and followed appropriate safety measures for most of the experiment, but at the end, “he became a little complacent,” says the student’s adviser, chemistry professor F. Dean Toste. The student should have worn safety glasses and used a nonmetal spatula for the transfer.

Toste and UC Berkeley Office of Environment, Health & Safety Executive Director Mark Freiberg have worked together in the months following the accident to figure out what to do to try to prevent other similar events. “We look at it as systemic failure,” Freiberg says. “We’ve spent a lot of time with this student and others in the lab, trying to explore this incident and glean from it as much as we can about how our current, fairly extensive efforts to improve safety were ineffective in this instance.”

The incident came nearly three years after UC reached a settlement agreement with the Los Angeles County District Attorney’s Office intended to improve safety in chemistry and biochemistry labs in the wake of the death of a UCLA staff researcher from injuries sustained in a fire. Following policies implemented in response to the agreement, the student injured at Berkeley had completed standardized safety training; received personal protective equipment (PPE) appropriate for his research, including eye protection; and signed that he’d read the relevant standard operating procedure (SOP) for the experiment that he was doing.

Toste’s group is experienced at working with diazonium compounds, and members are familiar with the risks and safety requirements, he says. He serves on his campus safety committee and tries to set the example of taking safety seriously by bringing up problems that he sees when he walks through his labs. Toste also invites EH&S staff to participate in his group meetings. And, as necessary, he’ll pair someone who needs training on a particular procedure with someone more experienced.

As a result of the incident, Toste’s group members now must write in their lab notebooks not just the chemicals they’re using for their reactions, but also the chemicals’ corresponding hazard classification numbers according to the Globally Harmonized System of Classification & Labeling of Chemicals; such numbers are on safety data sheets. If the researchers are working with chemicals that have codes ending in “0” or “1,” indicating particularly hazardous substances, they need to review the appropriate SOP. The warnings for sodium perchlorate, for example, include H271, the code for “may cause fire or explosion; strong oxidizer.”

Additionally, anyone who wants to work with perchlorates will have to discuss the experiment with Toste.

The incident illustrates what many safety experts have long worried: Wearing regular prescription glasses may give people a sense that their eyes are protected, even when they’re not wearing safety glasses or goggles. To address that issue, the UC Berkeley College of Chemistry will now pay any costs for prescription safety eyewear not covered by a researcher’s insurance company.

UC Berkeley is also considering whether to create and distribute SOP summary, or “highlight,” sheets. Some in the department feel that information in the regular SOPs isn’t “sticking,” because people have to sign multiple lengthy ones all at the same time, Freiberg says. “There is a trade-off—anything written in an SOP could be relevant in a particular situation,” he adds, but the summaries could still be a helpful way to engage people.

The changes implemented as a response to the incident will hopefully help to ensure that researchers are neither overly focused on compliance nor restricted by rules, but have the freedom to explore scientifically in a way that’s also safety conscious, Freiberg and Toste say.

“It’s not to the student’s benefit if we restrict hypothesis- and curiosity-driven research,” Toste says. “But we have to change the culture so that it’s second nature to always put on safety glasses and other PPE and to check the SOP.”

Comments
Mahmoud M. Abdelnabi (September 4, 2015 4:00 AM)
At the time of any incident, we can say that "we are expecting what will occurs 100%"
and Not " Safety is First" but "No other way than Safety" should taken in consideration.