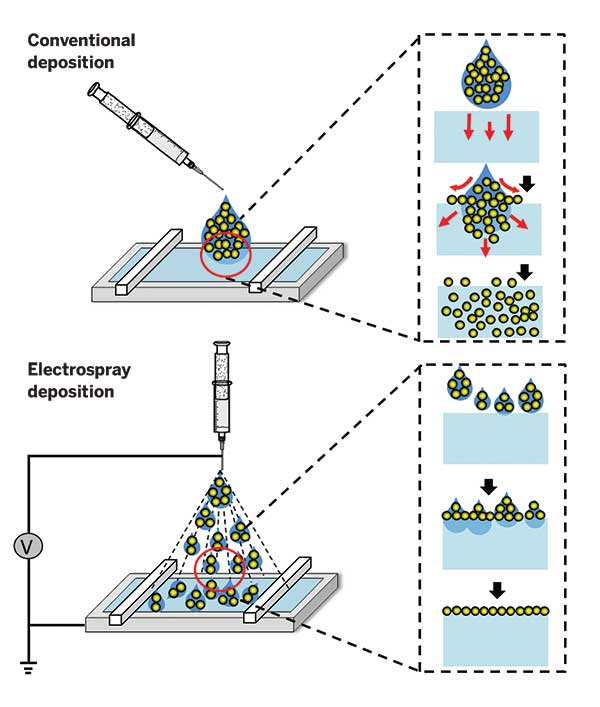 Credit: Adapted from J. Am. Chem. Soc.
The traditional Langmuir-Blodgett method (top) has trouble forming films of colloidal particles because droplets tend to mix and diffuse when deposited onto water. A new electrospray method (bottom) sidesteps the mixing problem.

A popular technique that helps scientists deposit defined layers of tightly packed organic molecules onto solid surfaces is getting its first major update in more than 80 years.

The LB method—developed in the 1930s by Katharine B. Blodgett and her longtime General Electric colleague and Nobel Laureate Irving Langmuir—is a simple and widely used procedure. Typically, practitioners dissolve an organic material in a volatile, water-immiscible solvent, such as chloroform or toluene, and deposit droplets of the solution onto the surface of a water trough. As the solvent evaporates, the organic molecules form a monolayer film on the water surface that can be transferred to a solid surface by dipping the substrate into the trough. Repeating the procedure forms multilayers.

A handful of research teams have attempted to use the LB method to deposit films of colloidal particles onto surfaces. But because of the traditional solvent requirements, the process has been challenging. For example, forming layers of polymer particles with the LB method has generally been impossible because commonly used solvents decompose or alter those particles. Switching to nondamaging water-miscible solvents is not an option because droplets of such a solution won’t form a film on the surface of the water trough: They’ll just dissolve.

But as Northwestern’s Hua-Li Nie, Jiaxing Huang, and colleagues show, electrospraying the droplets onto the water can help bypass those problems. The main reason, they explain, is that electrospray droplets are micrometer-sized or smaller; when spritzed across the trough, they fall gently and stay put on the water surface, forming a film. In contrast, droplets formed by pipetting and other conventional methods can be 100,000 times as large. The large, heavy droplets invariably submerge in the trough and mix with the water, leaving little material at the surface to form films.

In one demonstration, the team showed that electrospraying an ethanol solution of gold nanoparticles formed well-ordered films. Depositing the same solution via syringe, however, failed to form films. The team also showed that the same method forms films of polystyrene nanospheres, which would decompose in commonly used LB solvents.

“This work is very clever and interesting,” says Georgia Tech nanomaterials specialist Younan Xia. In the past, he adds, the solvent requirements “have always been a pain.” This advance “will greatly expand the range of nanoparticle materials that can be assembled into monolayers using the LB technique.”