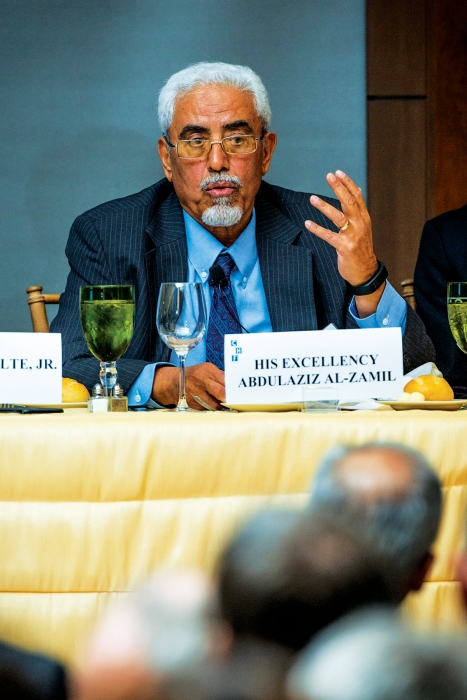 The man who is often called the father of Saudi Arabia’s chemical industry is neither a chemist nor a chemical engineer. But Abdul Aziz Al-Zamil not only helped make state-owned Saudi Basic Industries Corp. (SABIC) the world’s fourth-largest chemical maker, he also had a major hand in establishing and championing private chemical enterprises in the oil-rich desert kingdom.

Al-Zamil was just 34 years old in 1976 when the country’s Ministry of Industry & Electricity created SABIC and put him in charge as its first chief executive officer. Since then, Al-Zamil tells C&EN, his experiences have taught him the importance of sound government policies, strong business partnerships, and private enterprise. But he feels Saudi Arabia still has a way to go on its journey toward industrialization.

Al-Zamil graduated in 1968 from the University of Southern California with a master’s degree in industrial engineering. Soon after, he joined the Saudi Ministry of Trade & Industry, where he learned the basics of business development.

While at the ministry, he received a United Nations fellowship that taught him “how countries incentivize development,” he says. The award let him visit countries such as India, the Netherlands, and England to study the value of government policy in establishing industrial enterprises.

When the Saudi government formed SABIC, “we didn’t have much industry,” Al-Zamil recalls. The country exported oil but not much else. Large quantities of natural gas were flared into the atmosphere. SABIC was formed “to make money out of that gas and to add value to it,” Al-Zamil says.

But the country didn’t have the know-how to make chemicals or the marketing resources to get them to distant markets. “We had the feedstock, the ability to build infrastructure, and we had the finances to create a petrochemical industry,” Al-Zamil says. To access the best available technology and build an industry from the ground up, “we decided that a joint-venture approach would be best.”

Introducing international joint ventures in countries with a colonial past isn’t always easy, Al-Zamil notes. But in setting up SABIC ventures with foreign partners such as Shell, Exxon, and Mitsubishi, “we weren’t talking about politics. We were talking about business,” he says.

One of the most significant benefits of the joint ventures was the opportunity they provided to develop the first generation of native chemists, engineers, and plant operators, Al-Zamil points out. “We said to our partners, ‘We need to have Saudis run these plants.’ They said that would be difficult. I said, ‘It is challenging, but we need to do it. This is part of the deal.’ ”

The partners initially recruited about 500 Saudi engineers and 2,900 high school graduates and trained them at plants in the U.S., Europe, and Japan. Today, Al-Zamil notes, SABIC has more than 40,000 employees, the majority of whom are Saudis.

The recruitment and training of Saudi nationals continues at SABIC and at other, privately financed, chemical operations. For instance, one of Al-Zamil’s sons, Osama, is an engineer who graduated from King Fahd University of Petroleum & Minerals and the University of Houston. Osama works as a business development manager for the Zamil Group, a conglomerate owned by the Al-Zamil family.

Not surprisingly, Al-Zamil is a staunch champion of entrepreneurship and private enterprise, having grown up around his father’s trading and real estate business, which became today’s Zamil Group.

“Government, of course, sets the guidelines, the policies, and the incentives” for development, Al-Zamil says. “But choosing projects and deciding on investments—that is the role of people in the private sector. The less the government interferes the better.”

Al-Zamil is doing his part through the Zamil Group. For instance, Sipchem built a methanol complex with the help of Mitsui & Co. and Daicel Chemical Industries and a butanediol operation with Huntsman Corp. technology.

Al-Zamil sees private industrial development in Saudi Arabia as the realization of a larger national goal. Oil is still a huge part of the country’s industry. Downstream manufacturing “only represents 11% of our gross domestic product,” Al-Zamil laments.

“For Saudi Arabia to be considered an industrialized country, manufacturing should represent gross domestic product in the region of 22%,” Al-Zamil says. “We still have a way to go. But with the groundwork being laid, and the infrastructure, financing, and technical skills available, that goal is achievable.”