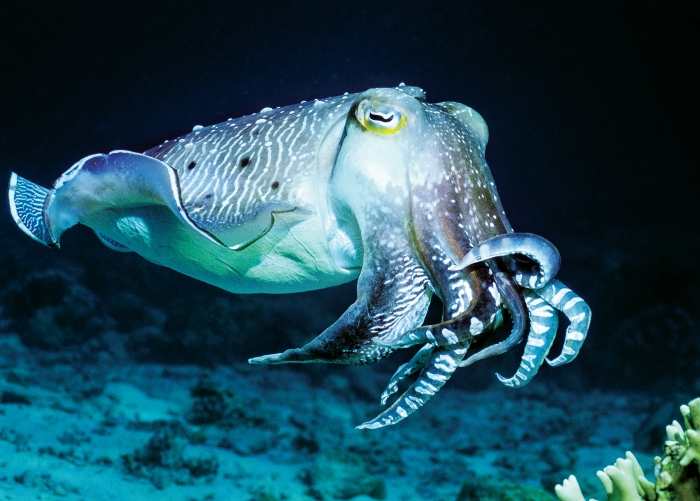 Cephalopods are masters of disguise. These animals, which include octopi, squid, and cuttlefish, rapidly change their skin color to blend in with their environment.

Cephalopods rapidly change their colors in part by expanding or collapsing skin organs called chromatophores, which are filled with a network of pigment-loaded granules. Leila F. Deravi, an assistant professor of chemistry and materials science at the University of New Hampshire, and coworkers are developing methods to identify the components of these pigment granules. They reported some of their preliminary work earlier this month at the American Chemical Society national meeting in Boston in sessions sponsored by the Divisions of Analytical Chemistry, Chemical Education, and Physical Chemistry.

Deravi’s team is working with multiple species of cephalopod. “The cuttlefish is one of the highest-definition cephalopods,” Deravi said. “It’s got more chromatophores per unit area on its skin, enabling its rapid and adaptive camouflage.” But those small chromatophores are difficult to separate from other organs in the skin that absorb and reflect light.

Instead, Deravi’s group is focusing on the squid Loligo pealeii. “It’s got the largest chromatophores and is one of the easiest cephalopods to isolate off the coast of New England—as opposed to cuttlefish, which are native to the Mediterranean and Southeast Asia,” Deravi said.

The isolated pigment granules have interesting photonic properties, including a unique fluorescence profile, Deravi told C&EN. The shift in wavelength between where they absorb, in the blue-green spectral region around 410 nm, and where they emit, in the far red region around 630 nm, is quite large, she said.

Despite the interesting optical properties, the actual composition of the granules is not well characterized. In fact, many people assumed that the pigment was melanin and therefore unremarkable.

“In my lab, we’re trying to break down the individual nanoparticles to see what the hierarchical structure is,” Deravi said. “What inside the nanoparticles gives them these interesting photonic properties?”

To answer that question, Deravi’s group is developing new analytical methods to separate the components. During her time as a postdoc at Harvard University, she and her coworkers denatured isolated cuttlefish pigment granules in concentrated sodium hydroxide and did mass-spectrometry-based proteomic analysis to investigate whether proteins contribute to granular structure in the chromatophores. Through that work, they figured out that two types of proteins—reflectin, which has a high refractive index, and crystallin, which they hypothesize might help focus light into the chromatophores—are the main structural components in the chromatophore (J. R. Soc. Interface 2014, DOI: 10.1098/rsif.2013.0942).

Now, her group at UNH has turned its attention to the composition of the pigments embedded in squid pigment granules. To determine that, they are currently extracting the compounds with a milder solvent and analyzing the extract with thin-layer chromatography and mass spectrometry.

Even when they combine the material collected from 10 to 20 chromatophores, the researchers don’t have much to work with. “With TLC, we’re able to take that small amount of material and pull out as much information as we can,” Deravi said.

They isolated four pigment bands, which they then analyzed by mass spec. From the initial analysis, they think the pigments are ommochromes, but they haven’t yet determined the exact composition. Ommochromes are redox-active substituted phenoxazinones, which are derived from tryptophan. These pigments are found in insects and other arthropods. Deravi’s team doesn’t yet know how these pigments might help squid change colors.

Other researchers have focused on the size of the pigment nanoparticles and how that leads to interesting scattering properties. But Deravi thinks the chemical composition is just as important. After they determine the precise composition, she hopes to use that information to develop new materials.

Taking color-changing tips from these cephalopods is a good strategy, says Jason Heikenfeld, a professor of electrical engineering and materials science at the University of Cincinnati. “Mother Nature is still far more powerful than man-made technology when it comes to making surfaces that can change color and do so with very high energy efficiency,” he says. “If we had just looked at what Mother Nature was doing instead of trying to invent stuff, we would have had really cool technologies in optics much earlier.”

Comments
Alexandra (September 2, 2015 4:43 PM)
Seeing as this is an academic article it would be nice to see that the proper plural of "octopus" used. That is, octopodes, or octopuses. The "us" in octopus is not Latin and so the pluralization to "octopi" is well known to be incorrect.
Otherwise, this article is quite interesting.
Reply »

Jeff Huber (September 9, 2015 10:08 AM)
Hi Alexandra, Glad to hear you enjoyed the article! We ended up using the word "octopi" because that's one of the two approved plural versions in Merriam-Webster's Collegiate Dictionary, which is C&EN's preferred dictionary. I hope that makes our word choice more palatable.
Reply »