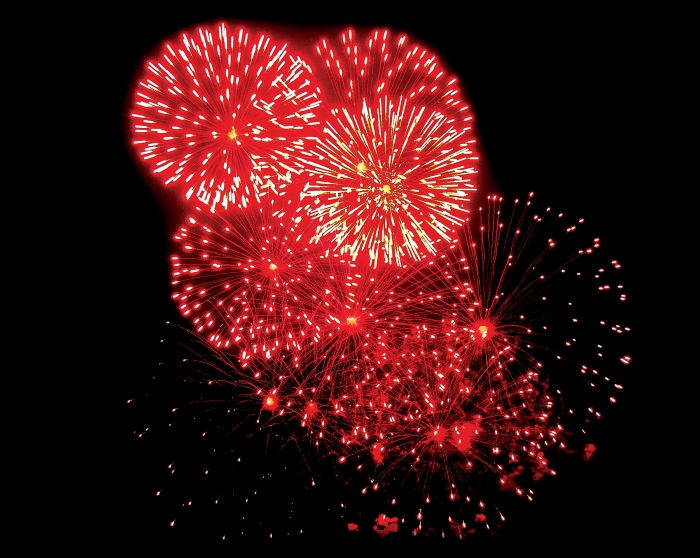 Makers of fireworks and flares have long believed that the beautiful red color in their explosions could be attained only with chlorine-based compounds. But after these ingredients combust, they can transform into cancer-causing chemicals that then fall to the ground.

Now, new chlorine-free pyrotechnics could pave the way for a generation of red fireworks and flares that are better for the environment and for people’s health, says Jesse J. Sabatini at the U.S. Army Research Laboratory, in Maryland. Sabatini developed the red pyrotechnics with Ernst-Christian Koch at consulting firm Lutradyn, in Kaiserslautern, Germany (Angew. Chem. Int. Ed. 2015, DOI: 10.1002/anie.201505829).

Currently, red fireworks get their hue primarily from strontium monochloride, which is produced by burning strontium compounds with polyvinyl chloride and a variety of other pyrotechnics ingredients. But the combustion of these mixtures produces a variety of polychlorinated aromatic chemicals, including some potent carcinogens.

To make more environmentally friendly fireworks, the researchers focused on strontium monohydroxide, a compound long believed to be only a minor contributor to the red color of pyrotechnics. According to Koch, for years, scientists hadn’t realized that strontium mono­hydroxide also strongly flared red because its sister product, strontium oxide, produces an orange-red color that fireworks-makers try to avoid.

Sabatini, Koch, and coworkers formulated the new explosive by replacing polyvinyl chloride on the old ingredient list with either hexamine, a preservative in citrus washing solutions, or 5-amino-1H-tetrazole, an air-bag propellant. The replacement sidesteps chlorine and produces strontium monohydroxide when the overall concoction is ignited, resulting in bright red fireworks.

The potential benefit is not just to those putting on Fourth of July and New Year’s Eve fireworks displays, comments David E. Chavez, a chemist at Los Alamos National Laboratory. The military is also a large consumer of red flares, particularly for training purposes. “Training areas get fallout [from flares] over and over again,” he says. So much so “that it can be an issue for environmental clean-up,” Chavez adds.

Environment
What are Holi colors, and what gives them such vibrant hues?
Pollution
What’s in fireworks, and what produces those colorful explosions?
Environment
Safer emergency flares, thanks to a less toxic and more stable chemical for making smoke
Share X
To send an e-mail to multiple recipients, separate e-mail addresses with a comma, semicolon, or both.
Title: Red Fireworks Go Green
Author: Sarah Everts
Chemical & Engineering News will not share your email address with any other person or company.