A Friend Has Left Us 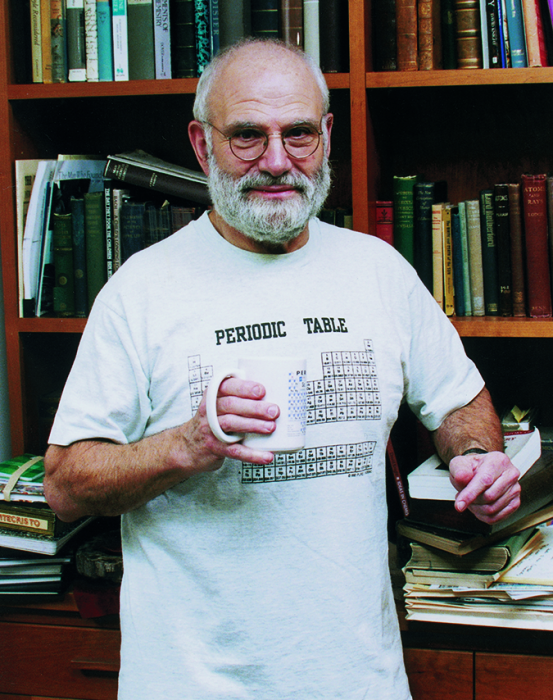 This guest editorial is by Roald Hoffmann and Bassam Z. Shakhashiri. Hoffmann is a Nobel Laureate in Chemistry and the Frank H. T. Rhodes Professor of Humane Letters Emeritus in the department of chemistry and chemical biology at Cornell University. Shakhashiri was ACS president in 2012 and is the William T. Evjue Distinguished Chair for the Wisconsin Idea in the department of chemistry at the University of Wisconsin, Madison. In 2013, Hoffmann and Shakhashiri contributed a guest editorial titled “The Joy of Chemistry” to commemorate Oliver Sacks’s 80th birthday (C&EN, July 8, 2013, page 3).

The world mourns a humane physician and a storyteller par excellence. And chemistry has lost a real friend, even a lover. Oliver Sacks, who died on Aug. 30 at the age of 82, was, of course, the observant clinician, a neurologist who found his voice in telling the true stories of his patients—and in reflecting, wisely, on consciousness, on hallucinogenic drugs, on music, on migraines, on the condition of deafness, on optical illusions. Each of Oliver's passions—be they ferns, cuttlefish, stereoscopic vision, or the discovery of the elements—was connected by his lively intelligence to the human condition. The mind, in its full magic sweep, was his beat. Oliver’s passions, gently voiced, made us see that understanding was the path to compassion.

And into his life came chemistry, an early love. Perhaps it was a way for a sensitive boy to escape difficult wartime conditions, to immerse himself in stories of discovery by Davy, by Cavendish, by Bunsen, and by the Elhuyar brothers. Oliver may not have been a chemist, but “Uncle Tungsten: Memories of a Chemical Boyhood,” in which he describes his infatuation with the elements, remains the best portrait of the stinks, bangs, and colorful crystals that still draw young people to chemistry. And no one can paint the portraits of the 19th-century makers of our science as Oliver does.

It was a constant love. So much more than an infatuation, as any visitor to his apartment could tell. Just five weeks before his death, Oliver wrote a column for the New York Times titled “My Periodic Table.” In it he talks, of course, of what is facing him. But he also tells of getting a sample of thallium for his next-to-last birthday and lead for his last. I remember his smile earlier in the year, when I brought him a small steel bottle of krypton salvaged from a Cornell lab by John Terry.

Our loss is eased by memories of seeing him, along with 350 Wisconsin freshman chemistry students, drop his bearded jaw in surprise watching bubbling liquids change color and smile broadly when a large plume of fog erupted as dry-ice pellets fell into a beaker of boiling water. His eyes opened wide with wonder and he sighed in delight at the brilliant blue glow from a liquid spiraling down a glass tube. It is consoling to remember his joy and childlike awe whenever he observed chemicals and their transformations. We are deeply gratified to have had our love of chemistry mirrored in such an expressive nonchemist as Oliver.

From the time his illness took its certain course, Oliver did something else for us. He wrote, by hand, as was his wont, or in characteristic hand-annotated typing, of his coming death. Earlier, he had made us see, in his gentle way, in his case studies, the dignity of the ill person. Now, he’s built, in words far from maudlin, a path for peace as one dies. Just by telling his own story. That essay on “My Periodic Table” is suffused with such peace in facing what will come to us all. The periodic table was indeed his. Thank you, Oliver, for your love of our science.

People
Leon Goodman
Environment
The Dark Side Of Tinsel
Physical Chemistry
The Joy Of Chemistry
Share X
To send an e-mail to multiple recipients, separate e-mail addresses with a comma, semicolon, or both.
Title: A Friend Has Left Us
Author: Roald Hoffmann
Chemical & Engineering News will not share your email address with any other person or company.