A Most Important Artifact 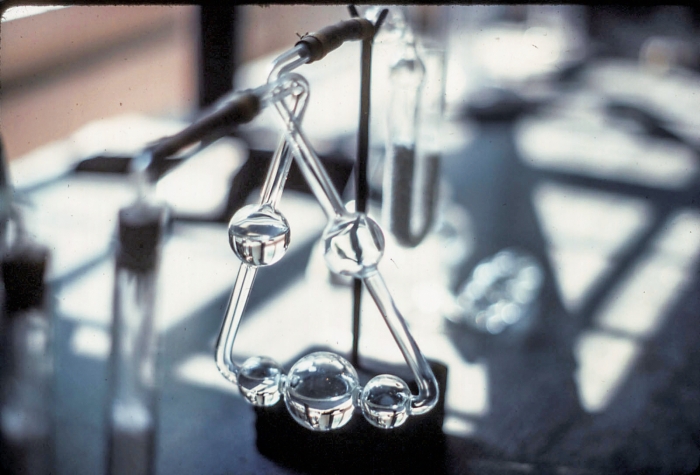 Looking at the kaliapparat, first built in the fall of 1830 by German chemist Justus Liebig, you’d be forgiven for focusing on the glassware’s pleasing design rather than its historical importance.

Yet the triangular, hollow tubular glass device, with five bulbs inserted along its three arms, was a landmark in the development of organic chemistry in that it provided chemists with the first precise way of quantifying carbon levels in a substance. The diminutive apparatus—it’s about as broad as an outstretched hand—also paved the way for the complex glassware found in chemistry labs worldwide.

Within a decade, the kaliapparat—also called a Liebig bulb—had spread to labs across Europe. The device was so popular that 19th-century chemists, typically students of Liebig’s, began wearing lapel pins featuring the kaliapparat’s triangular shape, says Alan Rocke, a historian of chemistry at Case Western Reserve University. “It was very faddish in Europe,” he says. 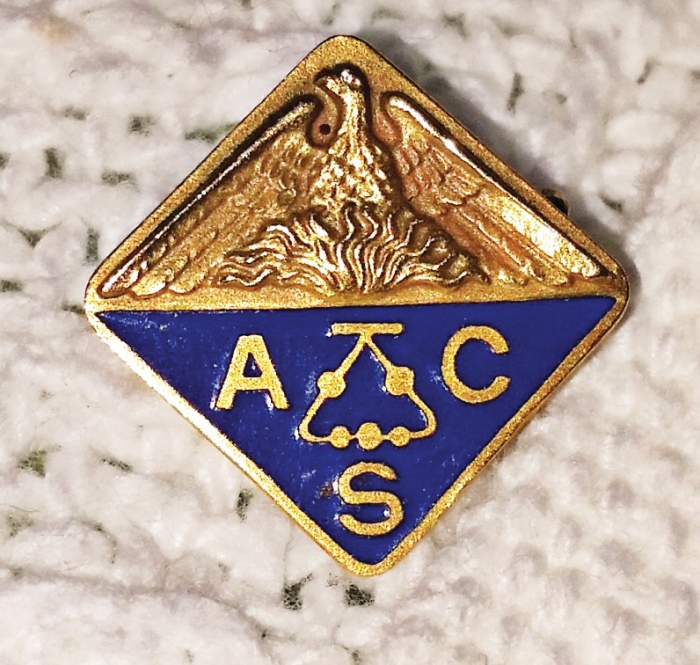 By 1909, the fad had crossed the Atlantic Ocean. Members of the American Chemical Society, which publishes C&EN, were demanding a membership pin for the society; the president and secretary had received so many letters that they charged a committee with the task of coming up with a design for a “pin, insignia, or emblem” for the society, Rocke says. Likely inspired by the German lapel pins, the kaliapparat was officially adopted as the ACS logo, using a design from the renowned Tiffany & Co. jewelers.

Fourteen-karat gold pins with blue enamel featuring the kaliapparat and the figure of a phoenix rising from a flame were sold by Tiffany’s to individual chemists by request. “It’s amazing that the logo has continued unchanged for over a century,” Rocke says. “It’s also amazing to me that so few chemists are curious about the design, even though they see it all over.”

Although modern-day chemists may not be familiar with the device, Liebig’s student August Hofmann raved so much about it that some historians thought he and others were hyping the kaliapparat’s usefulness and accuracy. So in 2005, Rocke teamed up with the late chemist Melvyn Usselman at the University of Western Ontario, in Canada, and two of Usselman’s students, Christina Reinhart and Kelly Foulser, to see how accurately they could measure carbon content using Liebig’s kaliapparat experiments (Ann. Sci. 2005, DOI: 10.1080/00033790410001711922). “Some historians thought the kaliapparat mythology was overplayed,” Rocke says, “and there was more than a little bit of uncertainty about what the device could actually do.”

They also wanted to confirm that a chemistry student could conduct the elemental analyses. As the story goes, the kaliapparat was so easy to use that beginners could master the device, rapidly multiplying the number of analyses that could be done in a week or a month. “Liebig used it to transform chemistry’s laboratory economy, developing a system of large-scale practical training that allowed him to do research in Giessen, Germany—what was then a backwater of the science,” notes Catherine Jackson, a historian of chemistry at the University of Wisconsin, Madison. By using large teams of students to rapidly conduct experiments, Liebig could outperform his competitors in France and England. This model of relying on students to do laboratory research remains a paradigm in today’s scientific labs, Rocke says.

When Reinhart and Foulser used the kaliapparat to measure carbon content in tartaric acid, urea, cinchonine, and narcotine, they found that the analytical method was remarkably accurate, Rocke says. “It’s mind-boggling that the simple apparatus can give you the quality of modern analyses.”

The kaliapparat operates on the combustion train principle in which a chemist burns a substance and what’s combusted is directed into an enclosed system of glassware. Combustion products are first passed over calcium chloride to absorb water vapor, removing H2O from the combustion train. Next, the combustion products are directed into a kaliapparat unit, where they pass through a solution of potassium hydroxide. The potassium hydroxide absorbs the CO2 combusted from the substance as this gas passes through the kaliapparat. When all is said and done, the difference in weight before and after combustion indicates the amount of CO2 produced, from which the carbon content of the original substance can be calculated.

Three bulbs located along the bottom of the triangle hold the potassium hydroxide. Violent bubbling indicates that CO2 absorption is taking place, Rocke says. By the time the combustion gas has hit the third bulb, there should be little or no bubbling, a sign that all the CO2 has been absorbed, Rocke says. “So you can tell by eye if you’ve done the experiment right.”

There are two additional bulbs on the apparatus, one on the arm upstream of the triangle’s base and another downstream. The upstream bubble can be used to test that there are no gas leaks in the system before starting the experiment. Before combustion, researchers suck potassium hydroxide into the upstream bubble, which should remain level if the system is airtight. The downstream bulb catches potassium hydroxide overflow, to ensure the solvent doesn’t bubble out of the device.

Perfection is, of course, hard to achieve: Rocke and colleagues found that Liebig’s device provided “erratic results for nitrogen.” In fact, Jackson says, Liebig was “unable to solve the extremely difficult problem of analyzing alkaloids such as morphine or quinine using the kaliapparat,” Jackson says. She discovered that “in response to this stalemate, Liebig prompted his student August Hofmann to introduce synthesis as a method for investigating organic chemistry—a move that established the field of synthetic organic chemistry” (Hist. Stud. Nat. Sci. 2012, DOI: 10.1525/hsns.2014.44.4.319).

Yet “the success of the kaliapparat for the analysis of relatively simple compounds introduced and propagated a new practice of chemistry in hollow glassware,” Jackson adds.

“The image of a chemist, wearing a lab coat, in front of a bubbling glass apparatus goes back to the kaliapparat,” says William Brock, an emeritus professor at England’s University of Leicester and a Liebig biographer. “It became a symbol, like the periodic table, for what chemists do.”

Neuroscience
Nuclear Forensics Shows Nazis Were Nowhere Near Making Atomic Bomb
Education
A Friend Has Left Us
Environment
First, Verify Your Research
Share X
To send an e-mail to multiple recipients, separate e-mail addresses with a comma, semicolon, or both.
Title: A Most Important Artifact
Author: Sarah Everts
Chemical & Engineering News will not share your email address with any other person or company.

Comments
R. Barth (September 9, 2015 2:37 PM)
It is a testament to Liebig's stature that, despite his huge error that set biochemistry back by decades, he is rightly remembered as the father of organic chemistry.Some of this is presented in the reference below.

The Role of Alcoholic Fermentation in the Rise of Biochemistry. Roger Barth. In: Ethanol and Education: Alcohol as a Theme for Teaching Chemistry
Roger Barth and Mark Benvenuto, Eds.
American Chemical Society, 2015. Chapter 3, pp 25-46.

Robert Buntrock (September 12, 2015 12:36 PM)
Thanks for the history lesson. I always thought that the apparatus was similar to the Kugelrohr linear multi-bulb distillation apparatus. Pregl (Nobelist) revolutionized microanalysis, a big improvement over kaliappart analyses, including N as well as CH. At the University of Minnesota in the 50s and 60s, we had our own microanalytical lab in which all departmental CHN analyses were run. Several of us took microanalytical chem for credit and some others worked there. Great experience.
Reply »