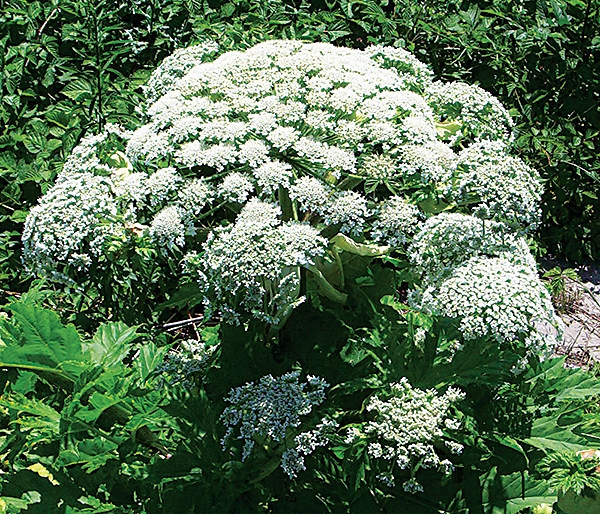 When hiking, the Newscripts gang is always on the lookout for poison ivy. But this summer, news stories popping up on social media made us extra cautious about the vegetation we came across. People in a couple of states in the U.S. and in the U.K. suffered burns on their skin after brushing up against a plant called giant hogweed. 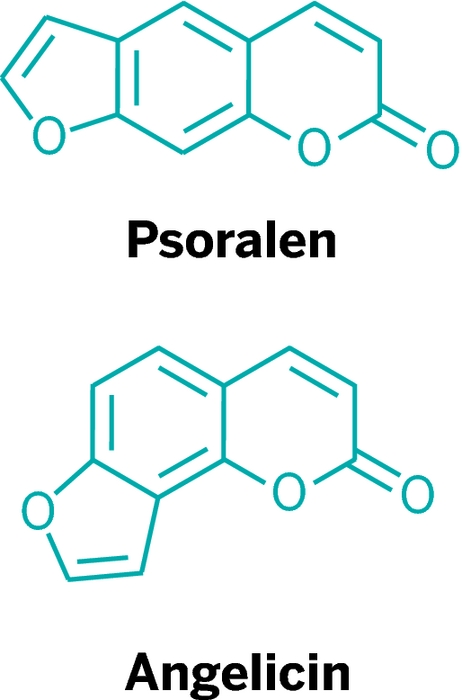 The 6- to 18-foot-tall plants produce chemicals that make people’s skin hypersensitive to the sun’s ultraviolet light, causing a condition called phytophotodermatitis. The chemicals are furanocoumarins, and when excited by UV light, many of them can cross-link DNA. This causes inflammation, leading to blisters and general burning and itching.

After a little research, we found out that giant hogweed isn’t the only plant that produces these chemical weapons. Other members of the Apiaceae family, including parsnips, parsley, and celery, make furanocoumarins, and the citrus family (Rutaceae) does as well. The plants synthesize the molecules mainly in their flowers and fruits to fend off pests, says May Berenbaum, an entomologist at the University of Illinois, Urbana-Champaign.

For more than 40 years, Berenbaum has studied the chemical arms race between wild parsnips and parsnip webworms. The insects churn out specialized cytochrome P450 enzymes to chew up the polycyclic molecules. “If detoxifying furanocoumarins were an Olympic event, parsnip webworms would be the gold medal winners,” she says.

People have long been collateral damage in such evolutionary battles. Berenbaum says the medical literature has many examples of odd rashes caused by furanocoumarin-producing plants.

For example, during World War II, nine Australian soldiers in New Guinea complained about blisters on their arms and hands. At first the military thought the Japanese had launched mustard gas attacks. But it turned out that the soldiers had been peeling parsnips all day in the kitchen.

In 1986, a doctor wrote about a woman who had blisters on the inside of her thighs after returning from a Club Med vacation. The doctor determined furanocoumarins were the culprit after she explained that she had been playing a drinking game involving rolling limes between her legs. He called the condition Club Med rash, but “the name didn’t catch on,” Berenbaum says.

So watch out for furanocoumarins next time you’re out cutting down weeds or at home juicing limes for your favorite cocktail.

But not all news about vegetation this summer was frightening. In July, researchers at Oregon State University reported they were exploring ways to produce a strain of seaweed for human consumption with an interesting selling point: It tastes like bacon.

[+]Enlarge
Credit: Stephen Ward
Meaty-ish: Dulse could be a low-fat alternative for bacon. 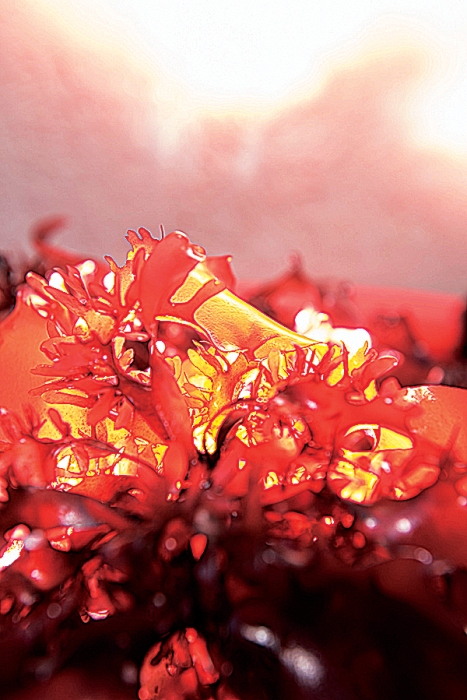 Credit: Stephen Ward
Meaty-ish: Dulse could be a low-fat alternative for bacon.

The seaweed is called dulse, and Chris Langdon, a fisheries researcher at OSU, has been growing the reddish algae since the 1990s to feed abalone.

People have been eating it for centuries, he says. In fact, health food stores already sell wild-harvested dulse in small quantities.

The harvesting process is inefficient, requiring people to pick the seaweed by hand during low tides. Langdon is now working with OSU colleagues to develop cultivation methods for a fast-growing dulse strain he discovered.

The seaweed, he says, is a good source of potassium and protein—between 12 and 18% by dry weight. The protein content, along with high levels of glutamate, probably contributes to the baconlike flavor.

Langdon cautions true bacon lovers that dulse isn’t a full substitute for the pork product. In particular, its texture isn’t very meaty. But the seaweed could be a healthy alternative. “It’s nutritious not only for abalone, but also for humans,” he says.

Comments
Ed Furlong (October 2, 2015 3:55 PM)
The noxious qualities of the Giant Hogweed have been publicly discussed for 44 years, in song no less: