What makes truffles so enticing, and are foodies unwittingly enjoying synthetic scents?

Dug up from the earth, these fungal treats are prized for their heady aroma 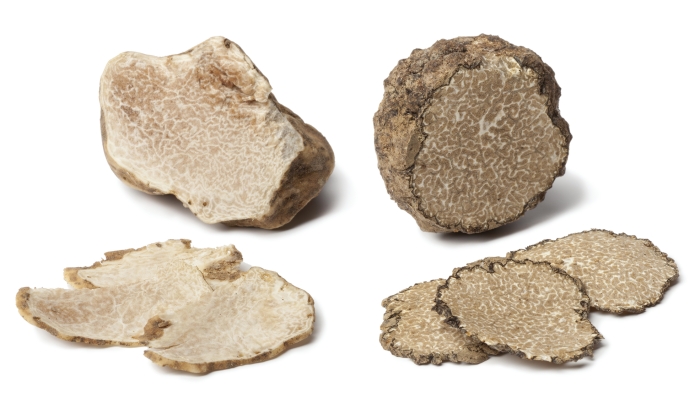 Credit: Shutterstock
Foodies use grated fresh white (left) and black (right) truffles to jazz up the fragrance of their dishes.

Bulbous and slightly squishy after a lifetime of hiding out underground, truffles aren’t exactly the prettiest of delicacies. But their potent, earthy scent makes them enticing to foodies and among the most pricey gourmet products sold around the world: Last year, Sotheby’s auctioned a 4-lb white truffle for $61,250.

Humanity’s love affair with truffles—which are actually the progeny, or “fruiting bodies,” of fungi that live in tree roots—dates back centuries. These black or white fragrant gems are often touted in ancient botanical and medical handbooks as an aphrodisiac—as well as a cure for all sorts of ailments, including flatulence. Current-day fans grate these dug-up nuggets on a potpourri of dishes, from pasta to steak, infusing the food with the truffle’s exotic odor.

Hundreds of scent molecules waft off fresh truffles. “They are more perfume than spice,” says Christina Wedén, who studies truffles at Uppsala University, in Sweden.

Most people who eat the delicacy in a restaurant aren’t experiencing the full suite of these odors. That’s because truffles don’t last long after being unearthed—just seven to 10 days. During this time the truffle’s scent molecules diffuse away and the fungus begins to rot, explains Richard Splivallo, a truffle scientist at Goethe University Frankfurt, in Germany, who was part of a team that sequenced the black truffle’s genome in 2010.

So sellers often boil or freeze the fungal flesh to extend a truffle’s physical lifetime, Splivallo says. Boiling destroys the texture of the truffle and leads to a complete loss of the truffle’s odors; freezing preserves some scent but also destroys texture. As a result, in many restaurants, chefs impregnate these truffles with synthetic scents—the same ones used in truffle oil and other products, Splivallo explains.

“If you buy a truffle product in a store, there is never actually any truffle in it,” Wedén says. “Usually these products have nice labels featuring dogs and truffles. But it’s a sad fact that all commercially available truffle products are synthetic.”

Black truffles are usually imitated with two chemicals, dimethyl sulfide and 2-methylbutanal. Meanwhile, white truffle scent is typically mimicked with the molecule bis(methylthio)methane. Although these chemicals are found in the natural odor of truffles, they are a stripped-down version of the fungus’s real fragrance.

There’s nothing wrong with enjoying the mimic, Splivallo says, “but people shouldn’t be tricked.”

Because truffle dishes often feature these mimics, many people have the impression that truffle odor is uniform, he adds. In reality every truffle has an odorous identity of its own.

The gaseous chemicals emitted by a given truffle varies with the fungal species—hundreds of truffle varieties exist around the world, although there are only about 10 species commonly used for food. A truffle’s scent is also influenced by the weather during the growing season, its host tree species, and the ecosystem of bacteria living symbiotically in and on the truffle. For a long time, truffle scientists debated whether truffle scent was produced by microbes or the fungi, but new research suggests that it’s most likely a joint effort, Splivallo says.

The only way to fully experience the full fragrance of these fungi is to find a source during truffle season. Although many of the most fragrant truffle species grow in Italy, France, and Spain, the fungi also can be unearthed in Chile, New Zealand, the U.S.’s Pacific Northwest, and China. Truffle season can vary dramatically: In the Northern Hemisphere, for example, black Périgord truffles are found from November through March, Alba white truffles from September through December, and Burgundy truffles from June through February.

During truffle season, hunters set out on foot with dogs that sniff out these underground harvests. Although wild pigs are the archetypal truffle-hunting companion, they’re no longer used, Splivallo says. “It’s hard to transport a 300-kg pig around the countryside,” he says. “Plus they get aggressive when you don’t let them eat the truffles.”

Researchers long suspected that pigs traditionally located truffles by sniffing out a molecule in the truffle bouquet called 5α-androstenol, which also happens to be a pig sex pheromone. But truffle scientists have found that pigs and dogs are instead attracted to dimethyl sulfide, the same compound typically used to mimic black truffles in truffle products, Wedén says.

With help from the black truffle genome, researchers are beginning to sort out why the fungi produce such a bouquet of odors. Attracting creatures to dig up and distribute the fungus is one reason to produce the strong fragrance. But scientists have also unearthed evidence that these gaseous molecules help the fungus convince plant roots to let it cohabitate in subterranean spaces.

As scientists continue to study truffle biology, they may get closer to finding the secret to farming truffles. To date, most attempts have not been particularly successful, Splivallo says. Of course, if scientists figure out how to grow truffles in a greenhouse, the fungus may lose its cachet—just as farming pearls have made those hidden gems just a bit less prestigious.