The U.S. Air Force turns to computational methods to find new materials to replace metal in its aircraft 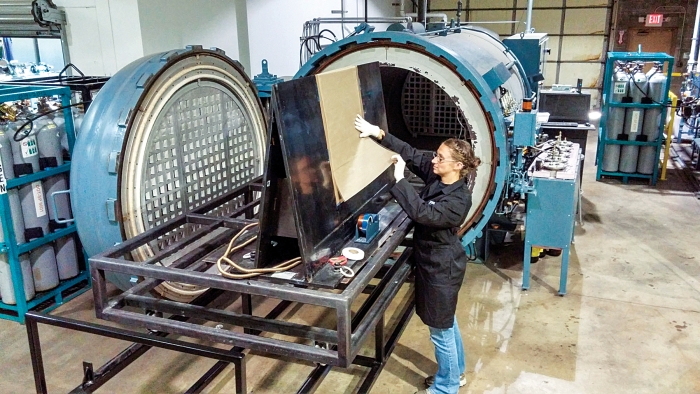 Flying longer and burning less fuel requires dropping some weight from already lean, high-flying fighting machines. Government and private-sector researchers have been working to replace hefty metals such as titanium with lighter composite materials for decades. Their goal is to boost performance and to lessen environmental, health, and safety concerns.

To replace titanium in aircraft, the Air Force and commercial aerospace manufacturers such as Boeing, General Electric, and Europe’s Airbus have turned to advanced composite materials to build aircraft bodies and complex engine parts. Increasingly, they are leaning on computational methods to design these materials as well as guide their manufacture.

Applications for advanced composite materials exist in F135 and F110 engines; B-2, F-117, and F-22 aircraft; missile structures; and sixth-generation engines, according to the Air Force. Meanwhile, Boeing started using such composites in 2011 in the fuselage of its 787 Dreamliner, and in 2013 General Electric opened an aviation composites factory in Ellisville, Miss.

“We are trying to increase the performance and capability of these aircraft, and if we can find weight savings by changing to a lighter material, that’s a win for the Air Force,” says Brent Volk, a research materials engineer at the Air Force Research Laboratory at Wright-Patterson Air Force Base near Dayton, Ohio.

Last month, the Air Force awarded $750,000 to the advanced composites division of Proof Research, an Ohio company that designs and manufactures advanced materials for aerospace applications. The grant was awarded through its Small Business Innovation Research/Small Business Technology Transfer program. The award will support the development of a database of polymer matrix composites with better heat tolerance than those currently used in aircraft, says Volk, who is managing the effort. Computational methods will be at the heart of the effort, he adds.

“This whole business about replacing titanium with composites has been going on for a very long time,” says Michael A. Meador, director of the National Nanotechnology Coordination Office. Before taking that post in 2014, Meador spent decades designing high-performance polymeric materials for aerospace applications from the National Aeronautics & Space Administration’s Glenn Research Center in Cleveland.

Polymer matrix composite parts are generally more costly to make than titanium ones, and there’s more manual labor involved because the structures are complex, Volk says. But computer-aided methods have already improved the efficiency of one part of the part fabrication process—the curing of polymers—by 20%.

“We’re getting a better grasp on the material systems, and some of these computational methods are starting to enable replacement of titanium,” Volk says. But there’s still room to improve, he notes.

As Volk and others move toward computational methods to refine manufacturing, they’re planning for an integrated approach to materials design and production that includes end-of-life analysis.

“We’re developing these computational tools to better predict the life of the material,” Volk says. “If we understand the chemistry of the material, we can predict damage to a part.”

If these hurdles can be overcome, polymer matrix composites would offer up to a 40% weight savings that can shave hundreds of dollars of fuel costs each year per kilogram of titanium replaced, the Air Force says.

Such composites are likely to find use in military aircraft engines in particular. There’s a general rule of thumb in the aerospace industry that says one 1 lb of weight reduced from the aircraft’s engine is the same as 10 to 25 lb removed elsewhere from the plane. It depends on the aircraft, but if the engine gets lighter, the wings don’t have to be as heavy and robust, for example, Meador says.

“What’s different about the Air Force’s effort is that they’re actually using integrated computational modeling in the materials development to reduce development cost,” Meador says. “This is consistent with the Materials Genome Initiative,” an interagency effort launched in 2011 to speed the process of materials development and deployment. He adds, “It’s something that the industry has been crying for for a long time.”

Ionic Liquids
Chemistry in Pictures: Papa’s got a brand new solvent
Materials
Fluorescent materials are the brightest ever made
Biomaterials
Fruit’s metallic blue caused by lipid nanostructures
Share X
To send an e-mail to multiple recipients, separate e-mail addresses with a comma, semicolon, or both.
Title: Building Lighter, Faster Military Aircraft
Author: Jessica Morrison
Chemical & Engineering News will not share your email address with any other person or company.