How Singapore Developed Its Chemical Enterprise

CORRECTION: This article was updated on Oct. 8, 2015, to correct the specs of the nuclear magnetic resonance instrument obtained by Nanyang University in 1974. It was a 60-MHz NMR machine, not a 16-MHz NMR machine.

Goh Suat Hong remembers the first time Nanyang University, a predecessor of today’s National University of Singapore (NUS), obtained a nuclear magnetic resonance machine. It was 1974, and the 60-MHz machine had just moved in to the university’s department of chemistry together with a differential scanning calorimeter. The two pieces of equipment helped kick-start Goh’s academic research in polymer characterization and synthesis. 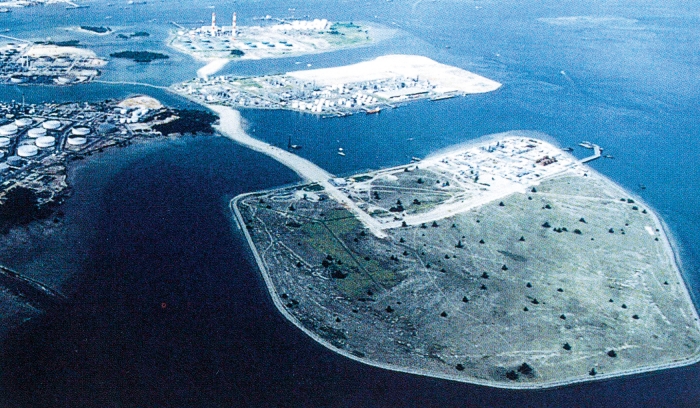 Acquisition of these instruments was a sign that Singapore was digging itself out of a hole. After the country gained independence from Malaysia just nine years earlier, in 1965, it had to grapple with high unemployment and economic uncertainty nationwide. With limited natural resources and a shortage of clean drinking water, scientific research was hardly a priority.

During the past 50 years, though, Singapore has invested in infrastructure and developed its workforce. And its chemical industry and research community have benefited, becoming robust pillars of the nation.

“Today, we are reaping the full economic returns,” says Andy Hor Tzi Sum, a former professor of chemistry at NUS who is now vice president of research at the University of Hong Kong. In 2014, Singapore’s chemical industry, employing some 26,000 people, grossed more than $75 billion U.S., and chemistry was the top research field in the country when measured in terms of research journal citations.

Singapore’s chemical education system took root before the country gained independence, and its beginnings were humble. Raffles College opened the doors to its chemistry department in 1929 with one chemistry professor.

During World War II, when Japan occupied the region, the college’s chemistry efforts suffered a setback: Raffles served as Japan’s military headquarters, and its science laboratory facilities were destroyed. After the war, Raffles rebuilt these facilities, and eventually, the institute became the University of Singapore. 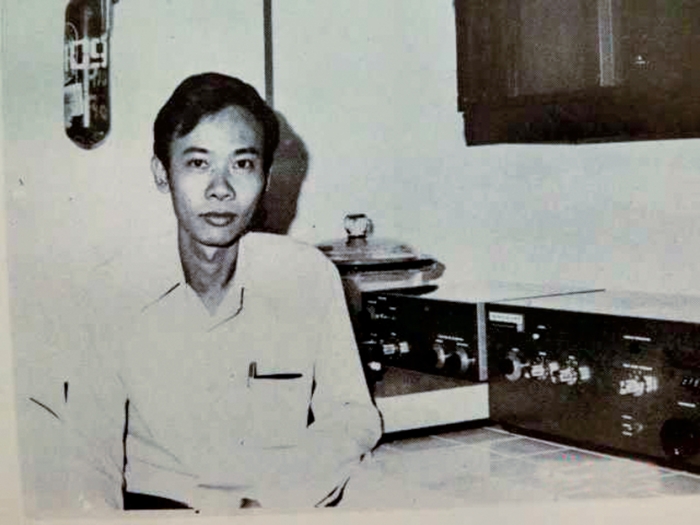 Credit: Courtesy of Goh Suat Hong
Goh sits next to a newly acquired differential scanning calorimeter in 1974 at Nanyang University.

Meanwhile, one other university sprung up in the region before Singapore claimed its independence—one that carried out instruction in Chinese. Nanyang University, or Nantah as it is commonly called, had its own chemistry department, opening in 1960.

Up until the 1980s, however, education overshadowed academic research at these facilities because of the need to prepare a largely illiterate population to work in developing industries and to train teachers for public education. To fund research, the chemistry department at the University of Singapore took money out of the budget for teaching, says Sim Keng Yeow, a retired chemistry professor. With limited funding from the Ministry of Education, facilities for research were inadequate and largely depended on charitable donations and personal favors.

“Professor Kiang managed to get money from the Singapore Turf Club” for a Perkin­Elmer infrared spectrometer that cost some $4,000, Sim says of his mentor, the late chemistry professor Kiang Ai Kim. “That was a very treasured instrument.”

Ang How Ghee, current director of the Energetics Research Institute at Nanyang Technological University, remembers the help he received from a friend in the U.K., Nigel Simpson, in the 1980s. Ang was interested in fluorine chemistry but needed a machine to generate a source of fluorine. Simpson, who ran a fluorine factory in the U.K., designed a small fluorine generator, shipped it to Singapore, and sent engineers to install it in Ang’s lab on the rooftop of the chemistry department at NUS. “It was very generous of him,” Ang says.

In 1980, the University of Singapore and Nantah merged to become NUS. For some years afterward, the newly formed university churned out a sizable number of chemistry graduates every year, but few sought higher education. Between 1949 and 1990, the chemistry departments at the University of Singapore and then NUS produced only about 55 master’s and 21 Ph.D. students, according to Sim. During some years, no students entered the graduate program at all, he says. Young citizens weren’t interested because few high-level jobs required a Ph.D. at that time. Singapore’s population was also small, so local talent was limited.

That changed in 1990, when Singapore established foreign relations with China, and the graduate student population had a “quantum leap,” Sim says. Because of the new relationship, Chinese citizens spilled into Singapore, where the postgraduate chemistry population grew to more than 150 by 1997.

That same year, Singapore’s government began investing in science and technology research. “That actually was the start of Singapore’s focus on research and development,” Hor says. The National Science & Technology Board, known today as the Agency for Science, Technology & Research or A*STAR, was formed within the Ministry of Trade & Industry to manage more than $1 billion of funding over five years. The money was awarded to scientific research aiming to take discoveries from the lab bench to industry and society. “This changed the whole landscape,” Hor adds.

A*STAR established its first facility, the Singapore Institute of Manufacturing Technology, in 1993. A number of other institutes cropped up in rapid succession, creating Ph.D.-level jobs. In the early 2000s, for instance, Biopolis, a biomedical sciences complex, opened its doors. So, too, did the Institute of Chemical & Engineering Sciences (ICES), now located on Jurong Island with the rest of the nation’s chemical industry.

Today, A*STAR’s funding still comes in five-year cycles, and its most recent cycle, in 2011, saw the distribution of more than $12 billion. The agency’s strength is in its translational research, Hor says.

In 2005, Nanyang Technological University (NTU), which had focused on engineering and vocational studies since it was established in 1991, opened its chemistry division. Combined, NTU and NUS now produce a strong base of chemists in Singapore who are able to attract multinational companies to invest and set up operations in the country. It’s not enough to attract firms with tax incentives, Hor says. “When they come, they need people.” Today, some 400 chemistry honors graduates enter the workforce every year, joining the chemical industry and teaching workforce, public sector, and academic research. 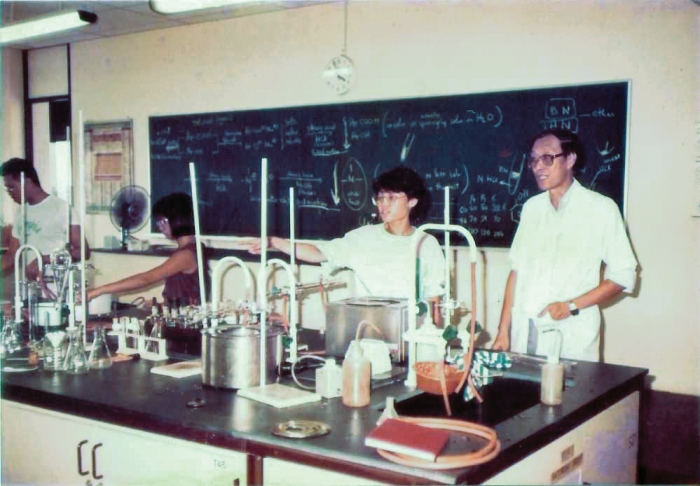 Credit: Courtesy of Sim Keng Yeow
Students work in an organic chemistry lab at the National University of Singapore in the 1980s.

At the time of Singapore’s independence, the chemical industry mainly focused on kerosene trading because the country was a major port for oil tankers. Rapid industrialization took place in the 1970s, and Esso, Royal Dutch Shell, and Singapore Refining Co. built refineries on small islands off Singapore’s southwest shore. Although Mobil was able to secure a facility on the mainland, the offshore facilities were necessary because space in Singapore—a tiny island nation, just 30 miles across—was at a premium.

The petrochemical refining industry grew to a capacity of more than 1.2 million barrels per day by the late 1970s. This large amount of refined petroleum provided feedstock for a downstream petrochemicals and specialty chemical industry.

To provide manpower to the blossoming chemical industry, the University of Singapore established a department of chemical engineering in 1975, says Jim Yang Lee, who graduated from that program four years later and now leads the department at NUS. Lee received training at Esso’s refinery and remembers taking the ferry each morning to one of the small southwest islands, Pulau Ayer Chawan.

In 1995, as Singapore’s population grew and land became more precious, the government began reclaiming land for the chemical industry. The plan was to join seven of the small southwest islands and triple their combined land area to make a single large island—called Jurong Island—by 2030.

The project attracted multi-million-dollar investments from major chemical companies all over the world interested in setting up operations in Singapore, including DuPont, ExxonMobil Chemical, Mitsui Chemicals, and Sumitomo Chemical. An expressway was also constructed to link Jurong Island to the mainland in 1999. In 2000, Jurong Island officially opened for business, and in 2009, the land reclamation was completed, 20 years ahead of the government’s schedule.

“Singapore built an island to house the industry,” says Keith Carpenter, executive director of ICES. “This provided an environment where we’re able to integrate many companies.” Operations on the island can share common facilities and infrastructure, such as transport pipelines, and one company’s waste can turn into feedstock for another company next door, Carpenter says.

In 2002, ICES was formed so that the chemical industry could begin to design its own products and continue moving up the value chain. The chemical industry now accounts for more than 40% of Singapore’s manufacturing output and provides a major source of well-paid jobs, Carpenter says. It’s currently addressing sustainability issues by increasing energy and water efficiency, as well as moving toward manufacturing consumer products such as pharmaceuticals and cosmetics.

Looking To The Future

With a mature chemical industry and chemistry research enterprise, Singapore is now looking to address cross-disciplinary issues such as climate change. “This is not a technological problem, but a human behavior problem,” Lee says, referring to the carbon emissions contributing to global warming. To address Singapore’s contributions to climate change, researchers from traditionally different disciplines, such as the physical and social sciences, have to collaborate.

Singapore also continues to grapple with its size. “Singapore is small,” so there aren’t a lot of people to feed into the talent pool, Ang says. To keep growing the chemical enterprise and maintain its health, we welcome top researchers from overseas, and local researchers will need to gain research experience overseas, adds Ang. “We literally must go global.”

XiaoZhi Lim is a freelance science writer based in Singapore.

Pollution
Measuring microplastics in seafood
Persistent Pollutants
US FDA sets voluntary arsenic limit in infant rice cereal
Pollution
Satellites can now see air pollution inequality within cities
Share X
To send an e-mail to multiple recipients, separate e-mail addresses with a comma, semicolon, or both.
Title: How Singapore Developed Its Chemical Enterprise
Author: XiaoZhi Lim
Chemical & Engineering News will not share your email address with any other person or company.