Chemical Modification Is Best Ever At Strengthening And Stabilizing Collagen 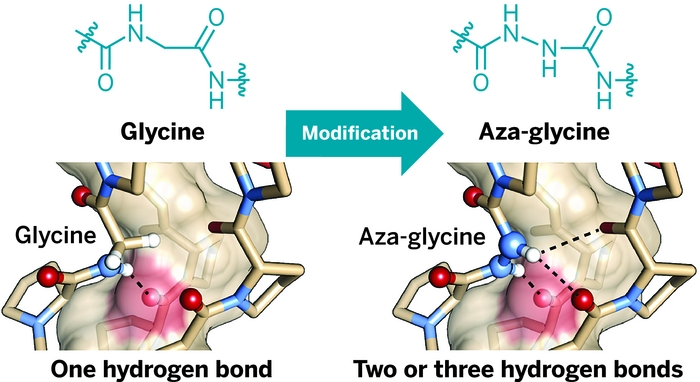 Credit: J. Am. Chem. Soc.
Changing glycine to aza-glycine (top) in one of collagen’s peptide chains (bottom, chain on left) enhances hydrogen bonding, making the protein stronger and more stable. Hydrogen bonds are dashed lines, carbon is tan, hydrogen is white, nitrogen is blue, and oxygen is red. The third helix strand is shown as a space-filling model behind the first two.

By switching out a single amino acid, researchers have dramatically improved the strength and stability of collagen, the protein scaffold found in the bodies of people and animals. The advance could lead to new biomaterials for a range of applications.

Collagen, the most abundant protein in mammals, is found in tendons, ligaments, cartilage, bones, blood vessels, skin, and other tissues. In the 1950s, legendary scientific figures such as chemist Linus Pauling, physicist G. N. Ramachandran, and biologists Alexander Rich and Francis Crick determined collagen’s repetitive, hydrogen-bonded, helical structure, which is reminiscent of DNA’s.

Ancient Egyptians used collagen as a glue. In 1881, it was adopted as a modern biomaterial when “catgut” from sheep was first used in biodegradable sutures. The protein has also been used in sponges, films, dressings, and skin grafts. But collagen is a complex, heterogeneous substance that can cause immune reactions when used in people, and it can break down partially while being isolated. Modified collagens could help solve these problems and lead to new applications.

In an effort to make improvements, researchers have extensively modified the protein over the years. Amino acid side chain modifications have improved collagen’s properties to some extent, but modifications to its peptide backbone have been nearly universally unsuccessful. In many cases, they have destabilized the protein, preventing it from forming its characteristic triple helix structure.

David M. Chenoweth and coworkers at the University of Pennsylvania have now made the first backbone modification that, far from destabilizing collagen, improves its properties (J. Am. Chem. Soc. 2015, DOI: 10.1021/jacs.5b04590). They found that changing one glycine in a 21-amino-acid collagen peptide to aza-glycine dramatically improves the peptide’s thermal stability and strength and increases the rate at which it folds into a helix. They are currently assessing the effects of substitutions at different positions.

Previously, Ronald T. Raines of the University of Wisconsin, Madison, and coworkers made the greatest improvement to collagen’s stability when they fluorinated a proline side chain. But the aza-glycine enhancement is greater than for any earlier single-residue modification. Chenoweth and coworkers “deserve a lot of credit,” Raines says. “I and others have stared at the collagen triple helix for at least 20 years, and no one had thought to make this substitution before.” A possible application of the new material would be as a support for wound healing agents, Raines says.

Glycine is the most common amino acid in collagen. It stabilizes the triple helix by sharing a hydrogen bond with a carbonyl group on an adjacent peptide chain. Aza-glycine’s N–H can share its hydrogen with either one additional adjacent carbonyl or simultaneously with two additional carbonyl groups, causing the increases to the protein’s strength and stability.

“The idea to replace glycine with aza-glycine is elegantly simple and surprisingly effective in stabilizing the collagen triple helix,” comments Felicia Etzkorn of Virginia Tech, whose group also designs collagen-peptide mimics. “The aza-glycine peptides conferred a remarkable increase in triple-helix stability over the native counterparts.”

Another collagen expert, Helma Wennemers of the Swiss Federal Institute of Technology, calls the new findings “a remarkable achievement that opens intriguing perspectives for the development of collagen-based materials.”

Biological Chemistry
Bacterial enzyme turns α-amino acids into β-amino acids
Materials
Collagen mimics snap into place
Materials
Amyloid Fibril Has Unusual Structure
Share X
To send an e-mail to multiple recipients, separate e-mail addresses with a comma, semicolon, or both.
Title: Chemical Modification Is Best Ever At Strengthening And Stabilizing Collagen
Author: Stu Borman
Chemical & Engineering News will not share your email address with any other person or company.

Comments
Drew McGhie (October 7, 2015 10:44 AM)
I started to read C&E News on the train this morning and before I reached Phila I had written this for David

Let us all give credit
To a man of substance rare
For David M. Chenoweth
Did substitute with flair
He took ubiquitous collagen
That one finds far and wide
And substituted for a glycine
In a collagen peptide
A backbone carbon was replaced
By a nitrogen and then
Hydrogen bonding added strength
Never seen before by men
And for this great discovery
He's featured in C&E News
So the world is now his oyster
And everyone him woos