CORRECTION: This story was updated on Oct. 8, 2015, to correct how the salts in the martian water affect its evaporation. 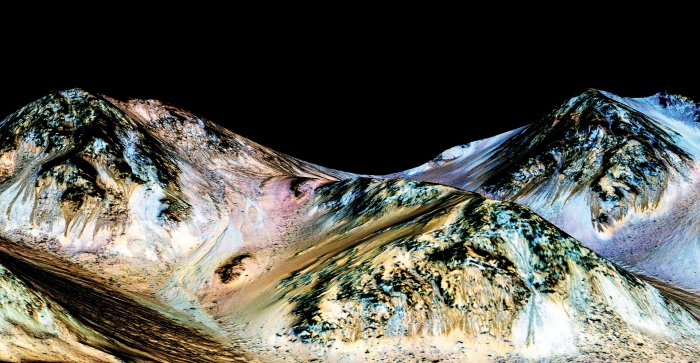 Credit: NASA/JPL/University of Arizona
Scientists believe the narrow, dark 100-meter-long lines in this image of the Mars surface were formed by flowing water. The blue color indicates the mineral pyroxene.

Although the source of the water is yet unknown, the case for flowing liquid is nearly unequivocal, thanks to spectra collected by the National Aeronautics & Space Administration’s Mars Reconnaissance Orbiter (MRO), which identified aqueous salts in the dark streams

This discovery provides a new, definitive target for the search for life on Mars.

“The existence of liquid water, even if super salty, gives us the possibility to describe a way how life might survive,” said John Grunsfeld, the associate administrator for the science mission directorate at NASA, at a press conference last week. “Now, this question is not abstract—it’s a concrete one we could answer.”

Although ample evidence exists that ancient Mars was covered with watery oceans and lakes, there’s never been conclusive evidence that liquid water exists there now.

“We know there have been these streaks, possibly caused by water, but that key evidence was missing: their chemical identity,” said Georgia Institute of Technology’s Lujendra Ojha during last week’s conference. Ojha is lead author on the new work.

The resolving power of the MRO’s spectrometers allowed team members to analyze the flowing features in visible and infrared wavelengths. The spectra showed clear evidence for hydrated varieties of magnesium perchlorate, magnesium chlorate, and sodium perchlorate.

The presence of the hydrated minerals is a smoking gun for water in its liquid state. The salts lower the freezing point and slow the rate of evaporation of water, making the liquid stable despite Mars’s cold temperatures and low pressures.

The new observation also meshes with the discovery of perchlorate ions in soil samples dug up by NASA’s Phoenix lander in 2008.

There are numerous theories about the water’s source, team scientist Mary Beth Wilhelm said at the conference, including the possibility of underground aquifers. Deliquescence, a process in which hygroscopic minerals in soil absorb water from the atmosphere, “is our favorite scenario,” she said.

However, Norm Sleep, a geophysics professor at Stanford University, hypothesizes Mars may harbor reservoirs of subsurface water free of the perchlorates.

“The subsurface water reservoir likely has moderate salinity and is quite habitable,” he told C&EN. Water that rises to the surface likely then dissolves the perchlorate salts, he said.

Whether these brines could be habitable is yet unknown. “We need to determine how cold and how strong the brine is,” Jim Green, planetary science division director at NASA, said at the conference. “We now have a great opportunity to be on the right location to investigate the possibility of life on Mars.”