Macromolecular chemist successfully straddles the divide between academia and industry 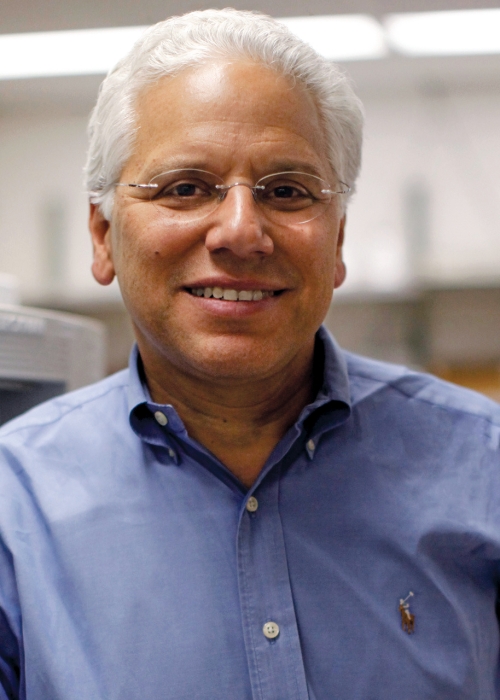 Richard DiMarchi may be the most commercially successful academic chemist you’ve never heard of. And with a recent deal to sell two companies he cofounded to the Danish drugmaker Novo Nordisk, that success continues.

DiMarchi, 62, is actually not an unknown. He’s a chemistry professor at Indiana University, Bloomington, and a former head of R&D at Eli Lilly & Co. Next spring he will receive the American Chemical Society’s Alfred Burger Award in Medicinal Chemistry.

But what differentiates DiMarchi is how, more than most contemporary chemists, he operates in both the academic and industrial realms. By straddling these two worlds, he has gained a unique perspective on how they support each other to make drug discovery happen.

DiMarchi was an indifferent high school student and entered Florida Atlantic University that way as well. But while there, he developed a love of biochemistry. He was recruited to graduate school at IU by then-chemistry department chair Gene Cordes. He did his postdoc under Nobel Prize winner R. Bruce Merrifield at Rockefeller University and then, by happenstance, headed back to Indiana in 1981 to take a job at Lilly.

It was the dawn of the biotech era. In 1982, Lilly launched Humulin brand human insulin, the first recombinant protein drug, using a process licensed from Genentech. It was a seminal accomplishment, but DiMarchi thought the technology could do more.

“Folks wanted this technology to produce what existed in humans, which was perceived to possess a divine quality that could not be exceeded by a medicinal chemist,” he recalls. “I saw these proteins as no different from any other natural product that chemists tried to optimize. Nature designs for physiology, and as chemists, we design for pharmacology.”

He realized that insulin could be improved by switching the positions of two amino acids. The result was Humalog, a modified version of native insulin that Lilly launched in 1996. To this day it is the firm’s best-selling product.

DiMarchi had many more successes at Lilly, including the peptide-based osteoporosis drug Forteo. But Lilly was fundamentally a small-molecule drug company, and DiMarchi was interested in what could be done by chemically modifying macromolecules, either synthetically or biosynthetically. “I call it chemical biotechnology—the fusing of the fume hood with the laminar flow hood,” he says.

He left Lilly in 2003 and with Scripps Research Institute California chemist Peter G. Schultz cofounded Ambrx, which modifies therapeutic proteins with nonnatural amino acids. “It was Pete Schultz’s technology from academia teaming with my industrial-strength experience,” DiMarchi says. Ambrx went on to license molecules to Roche, Merck & Co., and Bristol-Myers Squibb. Earlier this year, it was sold to a Chinese consortium.

Also in 2003, DiMarchi joined the IU faculty with the goal of creating an academic laboratory designed for drug discovery. Today, more than half of the two dozen nontenured staff scientists in his lab have at least a decade of drug industry experience. Five molecules they discovered have gone on to be tested in humans, an enviable accomplishment for any lab. “I’ve surrounded myself in academia with people who understand what it takes to make a drug,” he says.

DiMarchi likes to talk about how academia, biotech, and big pharma link together in a continuous process he calls explore, experiment, and exploit. It’s a chain he’s successfully employed numerous times. In 2006, his IU lab spun off Marcadia Biotech, which was based on research into glucagon, a hormone peptide known at the time only as an insulin overdose antidote. After discovering that glucagon could work with a second hormone, glucagon-like peptide-1, to lower body weight and, hence, the risk of diabetes, DiMarchi’s team designed a peptide that combines the properties of both.

Roche acquired Marcadia in 2010 for more than $250 million. For three years DiMarchi was a part-time employee of Roche, splitting his time between IU and Roche’s Basel, Switzerland, labs.

In 2013, DiMarchi cofounded another firm, Calibrium, based on his lab’s work to create insulin analogs that could decrease body weight rather than increase it. And earlier this year, he cofounded yet another new firm, MB2, based on assets of the former Marcadia, which DiMarchi and partners acquired after Roche’s decision to terminate cardiometabolic disease R&D.

Calibrium and MB2 are now in the process of being sold to the diabetes care giant Novo Nordisk. DiMarchi says he will work with Novo on cardiometabolic diseases while maintaining academic research in macromolecule chemistry.

All this has happened without the attention that other academic chemists—Robert Langer and Chad Mirkin come to mind—have received for forming companies. DiMarchi says he understands the lack of limelight and doesn’t mind. His roots are in the commercial sector, he points out, and he’s as active in biology as in chemistry. “People have often wondered, ‘Is he fish or fowl?’ ” he says.

Instead, DiMarchi stays focused on his research with chemically modified peptides and proteins. It’s chemistry that he hopes will continue to link the academic, biotech, and big pharma worlds. “I really believe this continuum is vitally important as a means to novel, cost-effective drug discovery,” he says.