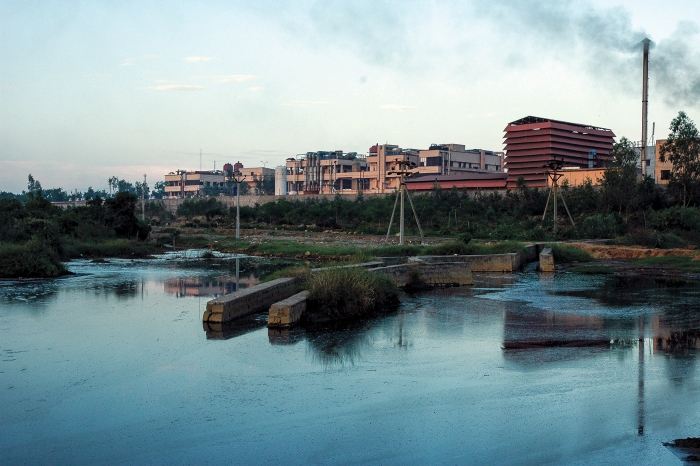 DSM Sinochem is promoting the view that one of the main causes of the rising problem of drug-resistant bacteria is the antibiotic makers themselves. By releasing into the environment antibiotic-containing wastewater, drug companies are fostering the emergence of deadly resistant bacteria, it says. Claiming that it has already cleaned up its own emissions, DSM Sinochem is challenging other companies to follow suit, particularly in China and India, where most antibiotics are made.

The company goes even further. Whereas one of the axioms of the chemical and drug industries is that it’s better to self-regulate than be regulated, DSM Sinochem says it would welcome new laws and regulations to stop companies from releasing antibiotics into the environment.

“Our message is not always liked by industry,” says Karl Rotthier, president of DSM Sinochem. “But industry needs to take responsibility not only for product quality but also for its air and water emissions.”

DSM Sinochem is a joint venture formed in 2011 when the giant Chinese state-owned trading firm Sinochem acquired a 50% stake in DSM’s bulk antibiotics business. The venture produces a range of off-patent antibiotics, including penicillin and amoxicillin, as well as anti-fungals and statins, at plants in Europe, China, Mexico, and India. Sinochem does not involve itself with the management of DSM Sinochem on a day-to-day basis, says Rotthier, a Belgian who joined DSM in 2005.

DSM Sinochem adopted its position on drug resistance approximately a year ago. Taking the environmental high ground would be a good strategy for a company with European standards looking to compete against low-cost Asian firms. But Rotthier says the main reason for the stance is a desire to do something about a frightening global threat.

“In a few years, we may not have the right antibiotics to treat pneumonia,” he warns. “Organ transplant will become impossible.” Already, he says, thousands of people every year lose their lives to drug-resistant bacteria.

Many researchers at private companies and publicly funded agencies seek to develop new antibiotics to replace those that are losing their effectiveness. But it’s a race against time. It takes 10 to 15 years to develop and certify a new drug, Rotthier notes. “We want to help extend the bridge spanning the time from when new antibiotics are discovered to when the ones we already have can still be used.”

The threat of antibiotic resistance has been raised at international health meetings for years, but it was only recently that environmental emissions by antibiotic manufacturers were named as a cause.

Historically, drug resistance has been blamed on overprescribing by doctors and the routine use of antibiotics in livestock. For instance, Amit Khurana, head of the food safety and toxins team at the New Delhi-based Centre for Science & Environment who has written about the overuse of antibiotics in the Indian poultry sector, says he is only vaguely aware of the issue of environmental emissions.

Here and there, however, manufacturers’ emissions of antibiotics are starting to draw the spotlight. In June, the New York City-based activist group SumofUs issued “Bad Medicine,” a research report that, among other things, accused major drug companies of sourcing bulk antibiotics from producers in China and India that routinely dump antibiotic-containing waste into the environment.

In June, the focus of the Uppsala Health Summit in Sweden was “A World Without Antibiotics.” One of the sessions, titled “The Environmental Dimension of Antibiotic Resistance,” featured as a speaker Joakim Larsson, a professor in the department of infectious diseases at the University of Gothenburg, in Sweden, who has long researched drug company antibiotic emissions.

Larsson and coauthors also tackled the issue in a recent paper (J. Antimicrobial Chemotherapy 2015, DOI: 10.1093/jac/dkv167). “Bacteria thriving in a lake contaminated by discharges from manufacturing were shown to be highly resistant to antibiotics,” they wrote. “Perhaps even more worrying, the environmental bacteria were capable of transferring their resistance genes to bacteria that are able to colonize the human body and possibly cause disease.”

China and, to a lesser extent, India are the world’s largest producers of antibiotics. In a 2007 paper, Larsson and coauthors found that drug manufacturers in Patancheru, India, discharged about 44 kg of ciprofloxacin per day into the environment, “enough to treat everyone in a city of 44,000 people.” Last year, a Chinese TV network reported that local manufacturer CSPC Pharmaceutical had been dumping antibiotic-rich effluent near its facilities in Inner Mongolia.

Manufacturers’ environmental emissions of active pharmaceutical ingredients are not regulated anywhere in the world, Larsson tells C&EN. Good Manufacturing Practices, a set of standards enforced by agencies such as the Food & Drug Administration and the European Medicines Agency, do not concern themselves with plant emissions. As a result, drug companies have no obligation to make sure that antibiotics are not discharged during manufacturing, regardless of whether they make the substances themselves or outsource the production.

In this context, it’s up to drug companies to self-police their manufacturing processes and sourcing practices. Most drug companies C&EN contacted for this article—including Teva Pharmaceutical Industries, Sun Pharmaceutical Industries, and GlaxoSmithKline—did not respond to requests for comments on their practices regarding antibiotic emissions. A Bayer spokeswoman responded that the German company closely monitors the levels of antibiotics in its wastewater. The waste is filtered out, and even combusted, to minimize residues. The company, she says, demands that its suppliers adopt similar practices.

A lot of companies are making sure their wastewater is residue-free, “but there are a few cowboys out there,” DSM Sinochem’s Rotthier says. His company applies an analytical method that was originally developed to measure antibiotic levels in milk, he says. By using a combination of treatment methods, DSM Sinochem has reduced antibiotic concentration in its wastewater to below 50 parts per billion, the lowest level that can be detected, he says. Wastewater processing, Rotthier insists, is practiced in the company’s plants worldwide, including in China and India.

DSM Sinochem’s actions are “very unusual and encouraging,” Larsson says. When it comes to antibiotics, “there are very few incentives for a company to be green.” Antibiotics, he points out, are often purchased in large quantities by public tender, with the cheapest supplier normally being picked.

To bring attention to the threat posed by environmental release of antibiotics, DSM Sinochem has enlisted the efforts of its influential co-owner, Sinochem. Authorities in Beijing, Rotthier notes, are doing a lot these days to fight the interconnected issues of pollution and corruption. In India, the company is also getting the attention of government officials who are keen to raise the level of manufacturing technology in the country, he adds.

The increased focus DSM Sinochem is bringing to environmental emissions of antibiotics could speed up the adoption of regulations governing their manufacturing and sourcing. If this happens, DSM Sinochem may find itself ahead of competitors, particularly in China and India. A company that is now a lone voice in the wilderness could find that its principled stance will pay dividends.

Persistent Pollutants
Goodbye to some PFAS in food packaging
Pollution
Satellites can now see air pollution inequality within cities
Pollution
Mercury makes it deep into marine trenches
Share X
To send an e-mail to multiple recipients, separate e-mail addresses with a comma, semicolon, or both.
Title: Resisting Resistance To Antibiotics
Author: Jean-François Tremblay
Chemical & Engineering News will not share your email address with any other person or company.