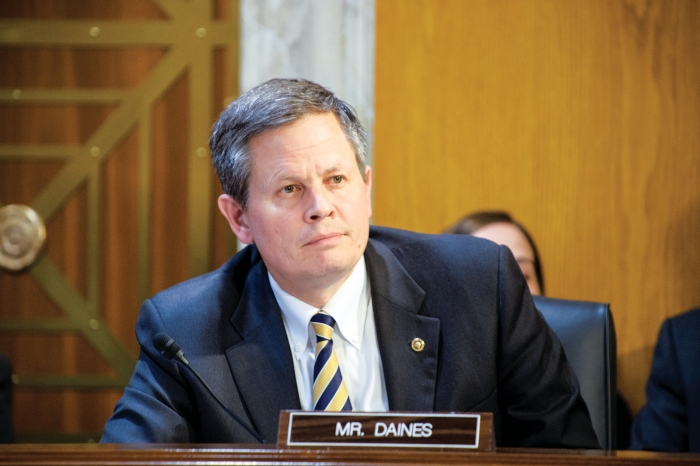 Sen. Steve Daines is part of an elite group in Congress.

“I’m president of the chemical engineering caucus, and there’s one member in it,” jokes the 53-year-old Montana Republican. “Hats off to the ChemEs out there.”

One of the few members of Congress with a science background, Daines earned his chemical engineering degree from Montana State University. Before launching his career in politics, Daines worked for 13 years at Procter & Gamble followed by a decade in management at a cloud computing start-up.

While Daines is new to the Senate—he took office in January—his background in chemical engineering and his work in the high-tech sector prepared him well to work in Congress, he says.

“Washington, D.C., can sometimes be consumed by ideology. The American people are looking for leaders who can solve problems, who bring a certain pragmatism to the job, and who want to get something done.”

That’s just what engineers bring to governing, Daines explains. “We’re trained to understand a process and to achieve a result.”

Growing up in Montana, Daines liked science and math in high school, but he didn’t know what he wanted to do for a career. Then he heard about a scholarship for students majoring in chemical engineering. Daines values the rigorous training he got as a chemical engineer. “Engineering degrees are degrees that open a lot of doors,” he says. That has proven true in his own life.

When he graduated from Montana State at age 21, he had several job offers, Daines says. He opted for a position at P&G working on the manufacturing processes for Scope mouthwash, Head & Shoulders shampoo, and other products. He rose through the ranks and became a manager.

After seven years, Daines was transferred to China to help produce and sell P&G products there. He, his wife, and two children moved to Asia, an experience that he calls life-changing.

Not only was he living in a completely different culture for the first time, but he also learned how business was done in Asia. For example, Daines helped recruit Chinese scientists and engineers to work for P&G. He then helped train them on how to work in a Western company, which often involved teaching them that it was okay to think outside the box and challenge authority, he remembers.

“We were there during the 1990s during a steep part of the change curve in China. Economically it was growing very rapidly, and a lot of change was occurring,” he remembers. “Our products did very well in China.”

After six years living in China—the younger two of his four children were born in Hong Kong—Daines and his wife decided to raise their children in Montana. Soon after they moved back, he started working for a cloud computing start-up, RightNow Technologies, in his hometown of Bozeman.

“There are certain skills that are transferable whether you are making Head & Shoulders shampoo or making a cloud computing software product,” he says, especially management know-how. As the company grew, Daines eventually led its Asian operations—from his home in Bozeman.

Several years later, Daines tried his hand at politics. The idea of a tough campaign can turn some scientists off from becoming politicians. But Daines says he thought of the campaign as an engineering problem to solve.

Now that he’s in the Senate, Daines is taking the same approach to his work there. He holds several key posts that involve science, including appointments to the Commerce, Science & Transportation and the Energy & Natural Resources committees. He says his chemical engineering background has helped him understand a number of the complex issues senators need to tackle. For instance, it gives him insight into oil, natural gas, coal, and renewable energy technologies.

Daines is also a member of the Senate Appropriations Committee, serving on subcommittees that oversee the Department of Defense and the Food & Drug Administration. He hopes he can help an often-shortsighted Washington establishment take a look at the long-term value of research, especially in the fields of technology and health.

“Washington, D.C., can’t think beyond the end of a fiscal year, if not sometimes the end of the month,” Daines says. But that’s not how basic research works. “These are payoffs we’re going to see in many years, maybe even a decade. I think we need to make these investments because the return on investment is very great.”

Science, technology, engineering, and math (STEM) education is another of Daines’s passions. He urges the many students he meets to become scientists or, especially, engineers. That includes his children. The elder of his two sons is an electrical engineer, while the younger one is majoring in mechanical engineering.

Daines also encourages scientists to enter politics, but he understands why most don’t. “The scientists and engineers I know really enjoy what they do,” Daines says. But he hopes more will consider public service, perhaps as a second career.

“Engineers are trained to solve problems, to develop solutions,” he says. “And we all know we have great challenges facing our country.”