[+]Enlarge
A Mn-based catalyst aminates a C–H bond (red) in a betulinic acid derivative (top) without reacting with the olefin group. 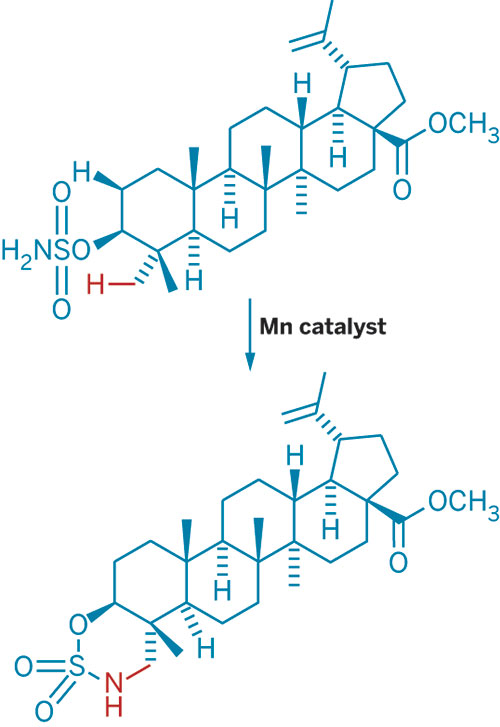 A Mn-based catalyst aminates a C–H bond (red) in a betulinic acid derivative (top) without reacting with the olefin group.

An inexpensive manganese compound solves a common problem for catalysts—the tendency of many to be highly reactive or selective but not both. The manganese catalyst can aminate strong C–H bonds but doesn’t interfere with other reactive groups.

Some previously reported precious-metal catalysts are reactive enough to aminate the most recalcitrant C–H bonds, such as primary ones, but they are expensive, toxic, and tend to lack selectivity, oxidizing other functional groups such as olefins simultaneously. Meanwhile, inexpensive and nontoxic iron-based catalysts are usually too weak to convert strong C–H bonds to amines.

Now M. Christina White of the University of Illinois, Urbana-Champaign, and coworkers report that a Mn(III)-tert-butylphthalocyanine/antimony-hexafluoride complex not only aminates these stubborn bonds but does so selectively in the presence of olefins (Nat. Chem. 2015, DOI: 10.1038/nchem.2366).

To carry out the reaction, the chemists first convert a molecule’s alcohol group to a sulfamate, a sulfur- and nitrogen-containing ester. The Mn catalyst and an oxidizing reagent then activate the sulfamate so it attacks a C–H one or two bonds away, yielding a cyclic sulfamate. Sulfamate ester rings can then be opened to yield diamines, amino alcohols, or other products.

The researchers used the synthesis to carry out late-stage C–H aminations of seven complex alcohol-containing substrates, including betulinic acid, a natural product with anticancer activity. White’s group synthesized the Mn catalyst in one step from commercial materials, and the University of Illinois has licensed it to Aldrich, which is making it available commercially.

Catalytic C–H amination expert Philippe Dauban at the National Center for Scientific Research (CNRS), in Gif-sur-Yvette, France, notes that the new reaction has impressive scope and can be applied to a wide range of molecules. But he’d like to see the reaction’s scope further expanded to intermolecular and asymmetric transformations.

Catalysis specialist Lawrence Que Jr. of the University of Minnesota adds that the reaction “exhibits broad tolerance for various functional groups, increasing its potential application to late-stage diversification of pharmaceuticals.”