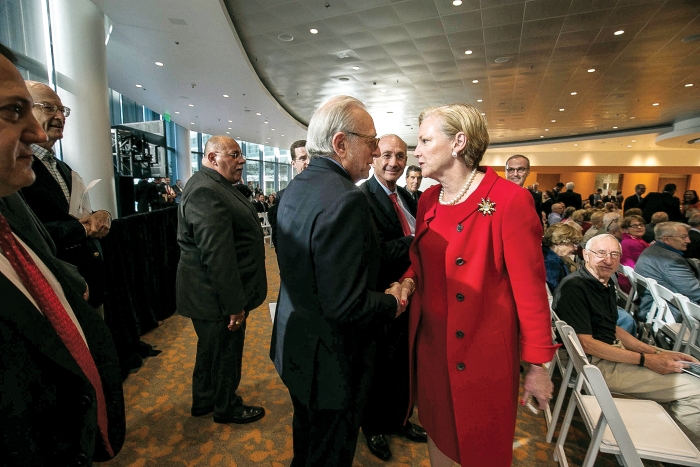 Ellen Kullman, chairwoman and CEO of DuPont, will retire at the end of this week on Oct. 16. As the company announced her retirement on Oct. 5 after nearly six years as CEO, it also reported that its earnings this year will come in below its previous predictions.

Succeeding Kullman, 59, as interim CEO will be board member Edward Breen, 58, who will also continue to serve as chairman of security products firm Tyco International. Breen was Tyco’s CEO from 2002 to 2012 and previously served as CEO of Motorola. DuPont’s board has hired an executive search firm to find Kullman’s permanent replacement.

Kullman provided no reason for her departure after 27 years with DuPont except to say “now is the right time for a new leader to continue to drive the pace of change to capitalize fully on the opportunity ahead.”

She recently came through a bruising battle with activist investor Nelson Peltz and his firm Trian Fund Management, which failed in a bid to gain seats on DuPont’s board. DuPont’s stock price had fallen more than 25% since May 12, the day before Peltz lost a shareholder vote. It rose 8% the day after Kullman’s announcement.

Kullman also orchestrated the spin-off of DuPont’s performance chemicals operations, now known as Chemours, to shareholders on July 1. That action came partly in response to pressure from Peltz to make DuPont a simpler and more consistently profitable firm. In 2011, she championed the purchase of Danisco, making DuPont a force in food ingredients and industrial enzymes.

In a call with investors after the retirement announcement, Breen commended Kullman for her leadership through the 2008 financial slowdown and her cost cutting at the firm. But Breen and DuPont’s chief financial officer, Nicholas Fanandakis, also acknowledged that DuPont expects its operating earnings to come in at $2.75 a share this year, down from previous guidance of $3.10 a share.

DuPont attributed the decline to the strong U.S. dollar versus currencies in emerging markets, particularly Brazil, where demand for crop protection and seed products is also weaker than expected. In response, DuPont said it would accelerate by one year an ongoing cost-cutting action. The firm now expects to achieve $1.3 billion in savings by the end of 2016.

Given the current “challenging environment,” Breen added, he and DuPont’s leadership team will take a “deep dive into our cost structure” in an effort to deliver “appropriate” returns to shareholders.

Analysts note that Breen engineered Tyco’s 2012 split into separate security products, alarm, and water pump firms. Given his new role at DuPont, the “likelihood of DuPont being broken up has substantially increased,” said Deutsche Bank stock analyst David Begleiter. The most likely scenario, he told clients, would be splitting DuPont into one company in agriculture and industrial biosciences and another in performance and electronic materials.