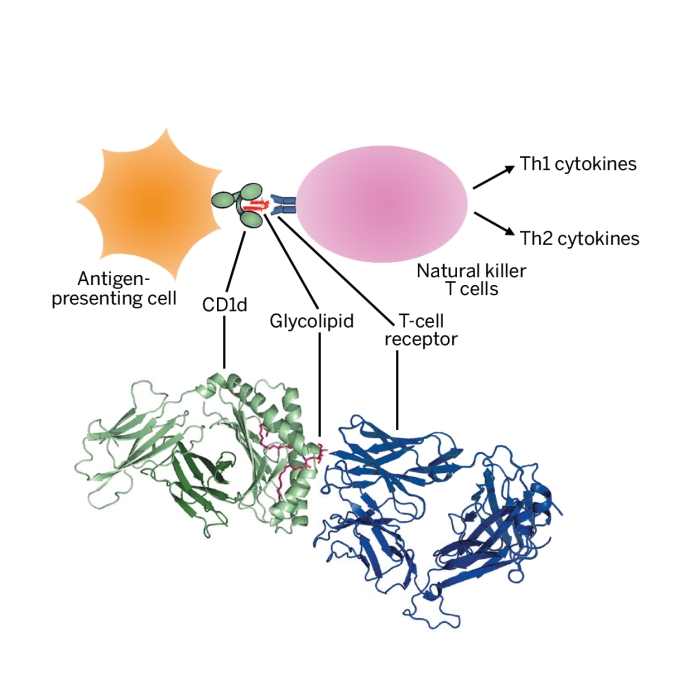 Credit: Nature [ribbon structure only]
A glycolipid (red) acts as middleman to induce formation of a ternary complex between an antigen-presenting cell’s CD1d receptor (green) and a T-cell receptor (blue) on a natural killer T cell. Ternary complex formation signals the T cell to release Th1 and/or Th2 cytokines.

Current interest in glycolipid-based drugs started with work by a Japanese beer company. In the early 1990s, chemists at Kirin Brewery isolated a family of glycolipid natural products called agelasphins from a marine sponge. The agelasphins were found to have anticancer properties. Kirin chemists synthesized an analog called KRN7000, also known as α-galactosylceramide (α-GalCer), a galactose sugar with two lipid chains. KRN7000 went into clinical trials on patients with late-stage head and neck cancers.

The trials failed, but KRN7000 didn’t just fade away. Instead, it has inspired two decades of research into how glycolipids and similar compounds modulate the immune system. No KRN7000-like glycolipids or analogs have yet been approved for human use, but scientists are testing them as potential drugs and vaccine adjuvants to fight microbial infections, cancer, and autoimmune conditions. These sugar-based molecules also have helped immunologists better understand how a specific type of immune cell becomes active.

KRN7000 and its analogs spark immune responses because immune cells treat them like antigens. Normally, immune cells called antigen-presenting cells bind invaders’ lipid antigens with their cluster of differentiation 1d (CD1d) receptors. The cells trigger an immune response to antigen sources by displaying the captured antigens, like toreadors wave red flags in front of angry bulls. The bulls are natural killer T cells, which use T-cell receptors on their surfaces to bind to and recognize the displayed antigens. 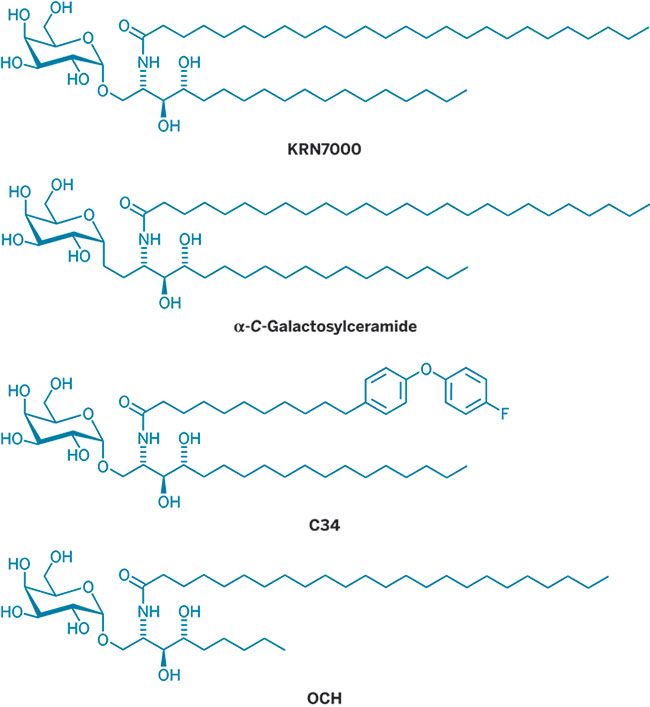 This creates a ternary complex—consisting of the CD1d receptor, the antigen, and the T-cell receptor—that activates the killer T cell to release cytokines. These protein messengers call on the immune system to attack the invader—be it a virus, bacterium, or cancer—and to promote inflammation. In some cases, “self-antigens,” antigens from the body’s own cells, may also bind to and get displayed by CD1d, inducing the immune system to attack normal, healthy cells and cause autoimmune diseases such as type 1 diabetes, multiple sclerosis, lupus, or rheumatoid arthritis.

When glycolipids and analogs act as antigen stand-ins, they bind to CD1d and get recognized by T-cell receptors, tricking killer T cells to release cytokines that elicit strong immune responses.

Whether activated by antigens or glycolipids, killer T cells have two types of cytokine responses in their repertoire, called T helper 1 and 2 (Th1 and Th2). Th1 involves the release of cytokines that boost immunity, causing antiviral, antibacterial, anticancer, pro-inflammatory, and autoimmune effects. Th2 involves the release of immunosuppressive cytokines, which weaken antiviral, antibacterial, and anticancer immunity, as well as cause anti-inflammatory effects and help protect against autoimmune conditions.

Th1 and Th2 responses are generally not exclusive but instead tend to overlap to one degree or another. Many researchers think that the anticancer clinical trials of KRN7000 failed because KRN7000 elicits roughly equal Th1 and Th2 responses, with Th2’s immunosuppressive effects canceling out Th1’s immune-boosting, anticancer effects.

So it’s not surprising that an especially active area of investigation in the glycolipid field is the development of KRN7000-like analogs that cause either Th1-biased or Th2-biased responses. Most of the analogs have been Th1-biased agents. The most extensively studied is α-C-galactosylceramide (α-C-GalCer), in which the glycosidic oxygen on KRN7000’s galactose sugar is replaced with a CH2 group. In 2003, Moriya Tsuji of New York University School of Medicine and coworkers synthesized this Th1-biasing analog. The compound demonstrated antimalarial and anticancer activity in mice but didn’t have those activities in human cells.

Other researchers have also made Th1-biased glycolipid compounds. In 2006, Tsuji, Chi-Huey Wong of Scripps Research Institute California, and coworkers added an aromatic group to one of KRN7000’s fatty acid chains to make three such analogs. And in 2010, Wong and Yi-Ling Lin of Academia Sinica, in Taiwan, synthesized C34, an even more effective Th1-biased agent, by adding another aromatic group and fluorinating one of the aromatic rings. They demonstrated that C34 had good antibacterial and antiviral activity in mice.

The most noteworthy Th2-biased glycolipid is a compound made by Takashi Yamamura and coworkers at the National Center of Neurology & Psychiatry, in Tokyo. In 2001, they shortened one of KRN7000’s lipid chains to create an analog nicknamed OCH. They found that it elicited primarily Th2 cytokine responses and suppressed autoimmunity in mice.

Some researchers have tried to find ways to predict whether a glycolipid or analog will be Th1- or Th2-biasing. Serge Van Calenbergh of Ghent University, in Belgium, says the working hypothesis is that compounds that bind CD1d and the T-cell receptor with high affinity form long-lasting ternary complexes and tend to produce enhanced Th1 responses. On the other hand, analogs that bind the two receptors with low affinity form ternary complexes that fall apart quickly and tend to be Th2-biasing.

In 2011, Steven A. Porcelli of Albert Einstein College of Medicine and coworkers came up with another way to predict analog immune responses. They found that Th1- and Th2-biased glycolipids localize to different compartments within antigen-presenting cells in mice. The researchers developed a flow-cytometry-based assay to detect these localizing tendencies and thus identify the functional proclivities of different glycolipids. The hypothesis on complex longevity and the Porcelli group’s assay provide complementary road maps that could aid future biased-analog development.

KRN7000 analog development may now be coming to fruition, with glycolipids undergoing clinical testing as drugs and vaccine adjuvants. For example, Yamamura and coworkers are currently conducting a Phase I clinical trial to test the safety of oral OCH as a therapy for multiple sclerosis. “We are seeking pharmaceutical companies that can collaborate with us” on OCH development, Yamamura says.

Vincent Serra of Abivax and coworkers reported last year having tested a glycolipid called ABX196 in a Phase I/II trial as an adjuvant for a hepatitis B antigen vaccine. They found that the agent plus the vaccine elicited stronger antibody responses than the vaccine alone in healthy volunteers.

Glycolipid adjuvants also might help solve a common problem with carbohydrate vaccines that target cancer cells. These vaccines, which induce immunity toward sugar-based antigens on cancer cells, tend to elicit immunoglobulin M (IgM) antibodies instead of more desirable IgGs. IgMs have low affinity for targets and bind them for only a short time, making IgMs only weakly effective, whereas IgGs bind antigens with higher affinity and hold on for a longer time.

Wong and coworkers are testing the ability of glycolipid adjuvants to change the types of antibodies elicited by carbohydrate vaccines. They find that a strong Th1 response promotes a vaccine’s anticancer activity, but a moderate Th2 response is needed to stimulate immune cells to produce IgG instead of IgM antibodies. So a biased Th1 response that retains some level of Th2 response is best.

In their tests, Wong’s team has used C34 as an adjuvant for a vaccine that induces immune reactions against carbohydrate antigens found on 16 types of cancer cells but not on healthy cells. When the researchers administered the vaccine—a conjugate of one of the antigens with a carrier protein—along with C34, mice created more antibodies against the target antigens than with a similar treatment using a conventional adjuvant. OBI Pharma, in Taipei, Taiwan, is now moving a vaccine against several cancers with a C34 adjuvant into Phase I clinical trials. And Academia Sinica has licensed C34 to OPKO Health, in Miami, for development as a stand-alone anticancer agent.

All of the work on KRN7000, other glycolipids, and analogs not only could lead to drugs and adjuvants but also has led to a better understanding of the way a key part of the immune system works, Llebaria says. “This is research where chemists are playing a strong role.”

Drug Discovery
A small molecule in the gut could explain bariatric surgery’s anti-diabetic effects
Vaccines
What will it take to make an effective vaccine for COVID-19?
Oncology
AstraZeneca licenses another Daiichi cancer drug
Share X
To send an e-mail to multiple recipients, separate e-mail addresses with a comma, semicolon, or both.
Title: Glycolipids Can Kick-Start Or Calm Immune System
Author: Stu Borman
Chemical & Engineering News will not share your email address with any other person or company.