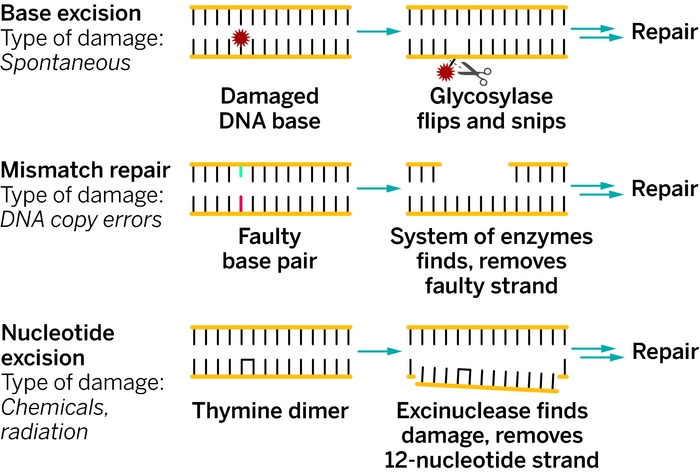 The 2015 Nobel Prize in Chemistry has been awarded jointly to Tomas Lindahl of the Francis Crick Institute and Clare Hall Laboratory in England, Paul Modrich of Duke University School of Medicine, and Aziz Sancar of the University of North Carolina School of Medicine ffor their mechanistic studies of DNA repair.

Our genetic material is constantly being damaged. “As a rough estimate, there are 10,000 DNA lesions per day per cell,” says Thomas Carell, who studies DNA repair at Ludwig Maximilian University of Munich. For example, every time DNA gets replicated, there’s a chance of the wrong base being inserted at a crucial spot. At the same time, chemicals or ultraviolet radiation can damage DNA bases.

“There’s no way to establish life based on such a fragile molecule without having sophisticated machinery to keep it in order,” Carell says. If these mistakes or damage don’t get fixed, they can lead to cancer or other diseases. “DNA repair is absolutely important to genome stability and of course to life.”

“There are certainly other important DNA repair pathways, but the uniqueness of these three pathways is that chemistry was at the heart of their discovery,” says Sheila S. David, who studies DNA repair at the University of California, Davis.

Lindahl realized that cytosine often spontaneously loses an amino group to become uracil. He identified an enzyme that removes the erroneous uracil. Later, he discovered a second enzyme specific for excising damaged adenine. These turned out to be just two in a large family of proteins involved in so-called base excision repair.

Sancar figured out the process by which cells repair UV damage. In bacteria, such repairs are handled by photolyase enzymes, which use light to repair UV-induced DNA damage. Later, Sancar found a “dark” system that repairs DNA damage without light. In that system, an excinuclease enzyme cuts out the damage, taking a piece about 12 nucleotides long. Other enzymes fill in the gap.

Modrich elucidated how cells repair mismatched bases in DNA. These are by far the most common form of DNA damage. Modrich showed that bacteria use an enzyme called Dam methylase to mark damaged DNA with methyl groups, which then guide a restriction enzyme to snip out faulty base pairs. In 1989, he assembled all the components needed to repair mismatched DNA in bacteria in a working in vitro system. In 2004, he similarly produced a human mismatch repair system, which isn’t directed by DNA methylation.

“The three scientists recognized by the Nobel Prize committee are pioneers who realized the chemical ‘vulnerability’ of DNA and discovered the main molecular pathways that repair common DNA lesions,” says Chuan He, who studies DNA repair at the University of Chicago.

And their work has inspired younger scientists. As a graduate student, Brandt F. Eichman, who now studies DNA repair at Vanderbilt University, was studying DNA damage induced by cross-linking agents. “I was completely energized and inspired by their work to the point that I was moonlighting on side projects to determine structures of DNA containing uracil mismatches,” he says. “The beauty of the mechanistic biochemistry from their labs was truly infectious.”